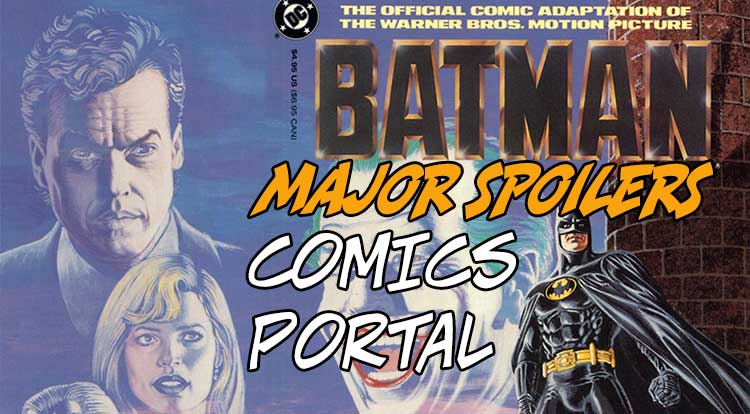 With all the hubbub surrounding the upcoming Star Wars movie, I started wondering if Marvel was going to release a comics version of it. You know, a comic that adapted the film and would appear in local comics shops?

Then I remembered – Oh, yeah, no comics company has done that in a long, long time!

WHY THEY USED TO MAKE THEM Years ago, before the advent of video recorders and the like, novelizations and comics were created to help us remember our movie theater experience. That way, we could once again go through the story we loved so much!

What often happened, though, was that the script would be sent to the comics company and it would be reworked for a comic. Changes, additions or deletions to the script wouldn’t be sent to the comic’s creators, so we would often get glimpses into what the movie MIGHT have been as well as many of the most important scenes. Also, the comics would be hitting the stands right around the time the movies would be released, not like videotapes or discs that come out months later.

My favorites used to be the Star Trek ones. I loved the comics based on the Trek films because I could even hear the music playing in the background as I read it, they were usually that faithful.

I remember Gordon Purcell, the artist who was great at turning the faces of the Trek stars into comics illustrations. I had heard he would often project a publicity photo onto a paper, then trace the faces so they were as accurate as possible.

Then, too, I recall when the first Batman movie starring Michael Keaton came out on tape. You received a smaller version of the adaptation with the recording. I enjoyed having both quite a lot.

But you don’t see these being made these days.

WHY THEY DON’T MAKE THEM ANY LONGER Of course, the biggest reason why films aren’t being adapted into comics is that the price of buying discs or digital versions of those movies has fallen tremendously. When the first Star Trek film was released for home theaters, I understood it cost over $50 to buy it. Wow! No wonder people were anxious to get comics adaptations!

Another problem was making the actors’ faces look as close as possible to them in the comics. Not every artist was like Mr. Purcell. In fact, I remember when a certain feline DC Comics character was getting her own movie. The artist, who I had the chance to speak with, found it really difficult to receive approval for several of the actresses’ likenesses. No matter how hard he close he got his drawings to look like them, they said “no!” After a while, it’s not worth even trying!

Also, many of us have pretty good memories. I often wouldn’t crack open an adaptation to a movie for months because I could remember what had happened in it. Now, after a while, when enough time had passed, I’d love to read the comic. But it didn’t happen that often, sadly.

The trend these days is to create comics (or even TV shows) that exist in the movie’s universe, but tell new or different stories. I don’t mind that, but even that kind of book doesn’t happen often enough to suit me. The notable comics I think of in this category are DC’s Arrow and The Flash digital-first books, but they’ve stopped making them! Even Marvel’s Agents of S.H.I.E.L.D. comic series looks like it’s going to veer far away from the Tuesday night show! Starting in January of this year, Marvel’s been producing quite a lot of Star Wars comics. Some focus on individual characters while others relate “untold stories” between the previous films or tales.

That’s fine, but there are a LOT of fans who don’t want to read comics based on popular franchises. I know several people who won’t touch a Star Trek or Star Wars comic because they feel they shouldn’t have to buy these books. These franchises were developed to be seen on the big or small screen, NOT in a comic book, they say.

If I’m that big a fan of the franchise, I LIKE diving into experiences I’ve never had there before. I really liked the recent Star Trek comic in which the new movie crew were taken into the future by Q to encounter the cast from Deep Space Nine. Now THAT was fun, and I’d never seen anything like that before!

But you have to give Marvel (and also Disney) credit when you consider the sheer volume of Star Wars titles they’re generating. These series’ are helping catapult Marvel to numbers twice that of the DC You comics, if recent months’ sales figures are any indication.

I wonder, would the 2015 comics sales numbers be anywhere as high as they have been without Star Wars? I don’t know for sure, but I doubt it!

I worry how 2016 will fare when the film has come and gone, and some of the enthusiasm may have faded. We’ll see! My brother calls J. J. Abrams “Jar Jar Abrams” because he’s been unhappy with how Mr. Abrams handled the Star Trek films before he switched over to Star Wars. Being two very different franchises, we’ll find out how fans react in about a month or so!

What do you think? Would you like to see movie adaptations come back to comics? Or would you much rather just wait a few months and buy the discs or download the files? Please share your thoughts below!