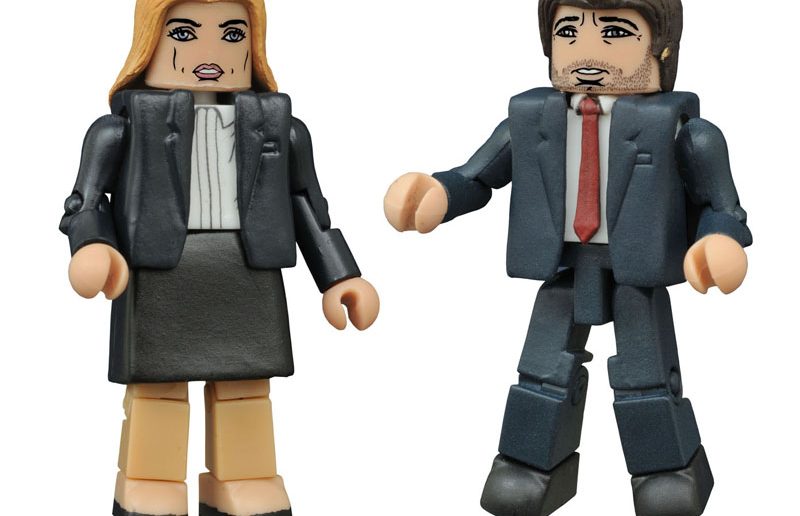 With the new X-Files series just around the corner, Diamond Select Toys has unveiled its plans for related products arriving in 2016.

Diamond Select will release products based on the fan-favorite TV series alongside items from the new 2016 event series. A two-pack of Minimates captures Mulder and Scully in their new looks, as fully poseable 2-inch mini-figures, and is currently available for pre-order through comic shops. Simultaneously, DST is offering a pair of 4-inch Vinimates – static vinyl figures sculpted in the Minimates style – that capture them in their classic appearances. In the future, DST also will release a series of Minimates 4-packs based on the classic series. I’ve seen the 7-inch figures, and they look really nice. Those might find their way onto The Want List, but I’m not sure about the Flukeman Minimate… that episode still gives me chills, and having a figure of the thing sitting on the shelf is sure to make the nightmares return.

“As a longtime fan of the show, I’m very excited to have finally been granted access to the X-Files,” said Diamond Select Toys President Chuck Terceira in a statement to the press. “Agents Fox Mulder and Dana Scully are one of the most widely referenced and recognized pairs in pop culture, and the new show has everyone talking about them again. Plus, we have nine seasons’ worth of supporting cast and creatures to play with in our line planning.”

Toys begin arriving in 2016, so you might want to check out your Previews catalog if you want to order anything.