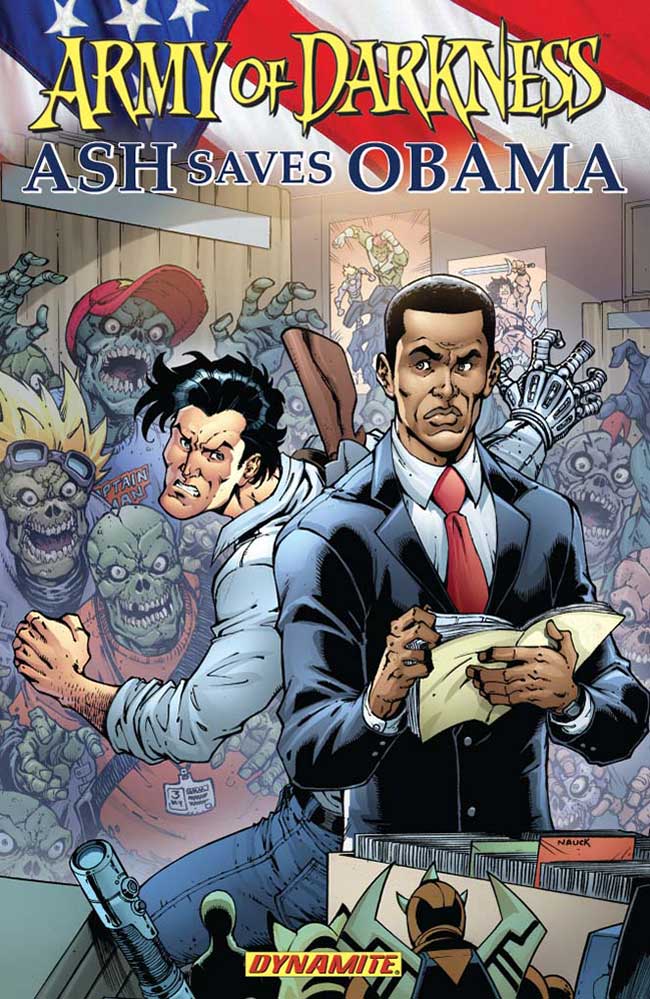 Dynamite Entertainment has unleashed the Army of Darkness comics into one giant-size Humble Bundle featuring more issues than you can shake a boomstick at. Based on the 1992 cult classic movie from visionary director Sam Raimi (Spider-Man) starring Bruce Campbell as “Ash,” this collection of comics continues the adventures of Ash, the “chosen one,” as he does battle with the deadites possessed by the Necronomicon, the Book of the Dead.

The stories bundled here feature legendary crossovers with other icons of the horror genre including Re-Animator, Dracula, and Hack/Slash – not to mention a groovy guest spot as Ash saves President Barack Obama. When he’s not bailing out the commander in chief, follow Ash on his many misadventures as he goes from ancient Egypt to entering a video game, blasts off into SPAAAACE, not to mention his scariest destination of all – the altar.

Check out the “dynamite” comics in this bundle at each threshold!

Customers can name their price for:

Those who pay more than the average price will also receive:

Customers who pay $15 or more will receive all of the above plus:

In total, there are 92 comics bundled here to help commemorate 1992 – the year that the Army of Darkness movie first hit theaters! The first taste is free as each day throughout the promotion, fans can sample the content as Ash brings some “sugar” with a new FREE comic at 2 p.m. Pacific time daily.

To check out the full bundle, head to: https://www.humblebundle.com/books/armyofdarknesscomic_bookbundle

“Army of Darkness was our first title at Dynamite and we’ve loved Ash since day one!” said Nick Barrucci, CEO/Publisher of Dynamite Entertainment. “Combining his eleven year of adventures with Humble Bundle to bring to a new audience is fantastic as it will help create awareness and bring more fans into the comics market. We’ve had great success with Humble Bundle, and are excited to create new opportunities for fans to come aboard and read more Dynamite Comics. In addition, we are able to help three incredibly important charities including Make-A-Wish, Doctors Without Borders, and the Comic Book Legal Defense Fund. This bundle is “groovy!”

As with all Humble Bundles, customers can choose how their purchase dollars are allocated, between the publisher and charity. Humble Comics Bundle: Army of Darkness supports three worthy causes:

About Humble Bundle
Humble Bundle sells digital content through its pay-what-you-want bundle promotions and the Humble Store. When purchasing a bundle, customers choose how much they want to pay and decide where their money goes — between the content creators, charity, and Humble Bundle. Since the company’s launch in 2010, Humble Bundle has raised more than $65 million through the support of its community for a wide range of charities, providing aid for people across the world. For more information, please visit https://www.humblebundle.com

In addition to their critically-acclaimed titles and best-selling comics, Dynamite works with some of the most high profile creators in comics and entertainment, including Kevin Smith, Alex Ross, John Cassaday, Garth Ennis, Jae Lee, Marc Guggenheim, Mike Carey, Jim Krueger, Greg Pak, Brett Matthews, Matt Wagner and a host of up and coming new talent!

Dynamite is consistently ranked in the upper tiers of comic book publishers and several of their titles – including Alex Ross and Jim Krueger’s Project Superpowers – have debuted in the Top Ten lists produced by Diamond Comics Distributors. In 2005 Diamond awarded the company a GEM award for Best New Publisher and another GEM in 2006 for Comics Publisher of the Year (under 5%) and again in 2011. The company has also been nominated for several industry awards, including the prestigious Eisner Award. http://www.dynamite.com/