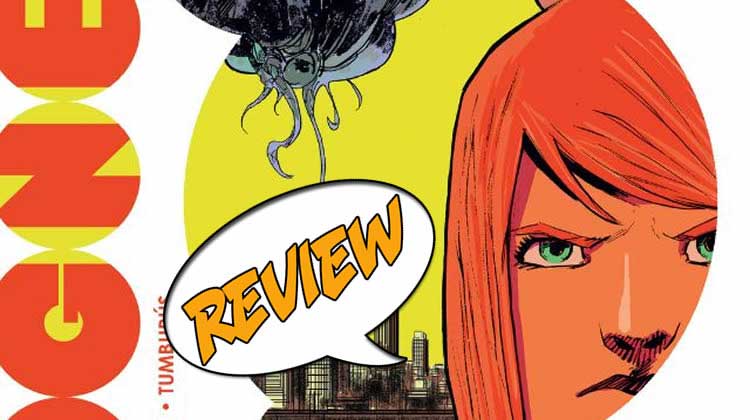 It’s always interesting to me that the more we seem to know, the easier it is for us to be scared. When The X-Files came on Fox, it was pooh-poohed because, it was said, “We’re just too educated and intelligent to be frightened by television shows any longer.” Yeah, right! I remember not wanting to use the toilet after the show highlighted what my brother called the “Commie Commode Creature” in an outdoor toilet. Still gives me the shivers, actually!

More and more comics, if they don’t deal with superheroes, are telling horror stories. One of the very best writers in both genres today, in my opinion, is James Tynion IV, who keeps me on the edge of my seat regardless of the book of his I’m reading.

I was truly gripped by his unusual Memetic from BOOM! Studios, and now he’s got a new title examining humanity’s place in the universe, and it ain’t pretty!

Previously in COGNETIC: “What’s to Love: The creative team behind the award-nominated Memetic is back with another apocalyptic tale! We obviously love working with James Tynion IV (see The Woods, UFOlogy, and the aforementioned Memetic), and we know partnering him once again with artist Eryk Donovan will lead to another great-looking story. In Cognetic, Tynion and Donovan offer a look at the fundamentally human desire for control-that deep-seated belief we all feel in our darkest moments that if we had total, absolute power, we would be able to create a perfect world.

“What It Is: Every human believes that they are self-reliant, self-determined individuals, each set on their own course. They’ve built civilizations, they’ve built culture, they’ve built lives… But what if that isn’t the right track? What if there is a singular mind ready to take back control and finally right the destiny of mankind and build a better tomorrow? Cognetic is the story of a powerful psychic being that once controlled one-third of the world’s population as a part of its hivemind, and his return to humanity in modern-day New York City. It’s a psychic action thriller, precariously positioned on the edge of outright apocalypse. It’s also the story of the young woman, the assistant to the director of the FBI, who might be the only one who can save humanity, but at a terrible, terrible cost. This is the second entry in Tynion and Donovan’s ‘Apocalypse Trilogy.’ Each issue in this miniseries is oversized with 48 pages!”

PULLED IN RIGHT AWAY

First off, I love the format of Memetic and Cogentic – longer issues that cost a little more, but are certainly worth it because they provide more story! And being a sci-fi fan, I love to explore just what it means to be human, something Captain James T. Kirk was always doing on the Starship Enterprise. Just don’t expect these titles to be as optimistic as Star Trek, though!

I also love to read the forewards in books, and Mr. Tynion talks there about the fact that, even as a youngster, he would write stories in which the United States would be exterminated due to a nuclear holocaust! As someone who never even dreamed of such a story, I enjoy being taken where I haven’t gone before, and this title certainly does that.

Things start out innocently enough, with two fisherman who have apparently captured a dolphin by accident. They launch into a discussion about the intelligence of these mammals when something unusual happens. The dolphin is smart enough to jump back into the water, but the humans go ashore. The visual cue regarding what’s going on is that the people who have been “altered,” as it were, have blue text in their word balloons; the others do not, only having standard black text.

One of the scary things about this book is just how quickly a disease or problem can spread. Before long, the two men and others they’ve influenced are on top of a tall skyscraper in New York City. It doesn’t take but a little while before everyone on top of the building are being controlled, with disastrous results. Now, I have acrophobia, the fear of heights, so what happens to the people on the building really gets to me. Yikes!

There are others involved in the story, including a married couple. The husband is in New York City, and when things go sideways, he tells her not to join him there as they had planned. Well, she goes there anyway, and the reason becomes clear near the end of this issue.

I am always most scared by terror impacting the mind, and this book really grabbed me. The big question in my mind now is: What’s going to happen next? I have no idea!

I often find that being a superhero fan can be a disadvantage because I expect things to be very clear and dynamic in my comics. But as I’ve read more horror over time, I’ve changed my mind on that when this kind of story is being told.

Like Memetic, this book’s art is sketchier than heroic comics, and that fits the tone perfectly. I liked the simpler drawings of the characters’ faces, for instance. Too much detail would not let me engage my imagination, but Mr. Donovan’s art is just what this book needs to pull me along from page to page.

There’s a particularly frightening sequence on the top of the building that has to do with the people forming a structure there. We see someone on top of that structure, and that thing or person begins talking with one of the main characters in the book. Seeing people that much under control is truly unnerving. Where it will go from there, I won’t know until I buy the next issue! Can’t wait!

I don’t get scared by Frankenstein and Dracula and the like. I find them a little outside my believability range. But this kind of thing? Yeah, I can see this as possible, and that’s scary to me.

Also, I like enemies from within, and that’s apparently what’s going on in Cogentic. I won’t spoil it, but intelligence is not necessarily defined by the size of the thing. What’s at the heart of this story is something that could make us sick, happy or controlled!

If you didn’t read Memetic, the trade paperback is available for pre-order. It’s not required to have read this story before you dive into Cognetic, but I think you’ll get more out of the latter if you do. Still, don’t let that hold you back from this gripping tale of what could be, as scary as that is! It’s perfect reading for Halloween!

Cognetic, like Memetic before it, is perfect reading for Halloween!