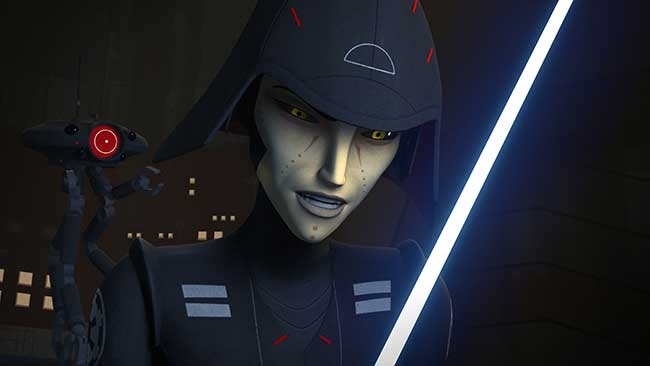 Sarah Michelle Gellar will be featured as the cunning and crafty Seventh Sister Inquisitor in the transformative second season of Star Wars Rebels.

A master of deception, the Seventh Sister Inquisitor is tasked by Darth Vader to track down the rebels and capture any surviving Jedi. She’s conniving, manipulative, and deadly with a lightsaber. Sarah talks about her character on “Star Wars Rebels” in this clips from Lucasfilm

Sarah Michelle Gellar embraces the dark side in her new role as the Seventh Sister, a Jedi-hunting Inquisitor in Star Wars Rebels. In the latest season of St…

“Always Two There Are”
Episode synopsis: Ezra, Sabine, Zeb and Chopper venture on a mission to an abandoned medical station in search of supplies for the fleet. When the arrival of two Inquisitors sent by Darth Vader puts Sabine and Ezra in peril, Zeb and Chopper devise a plan to save their friends.

In this preview of the Star Wars Rebels episode “Always Two There Are,” Ezra’s worst fears are realized when he deduces that the masked menace before him is …

Wow… That preview has me on the edge of my seat waiting for the episode to air on Wednesday. Star Wars Rebels had a jaw dropping finale last season, and this season has been on target and even better than the last.