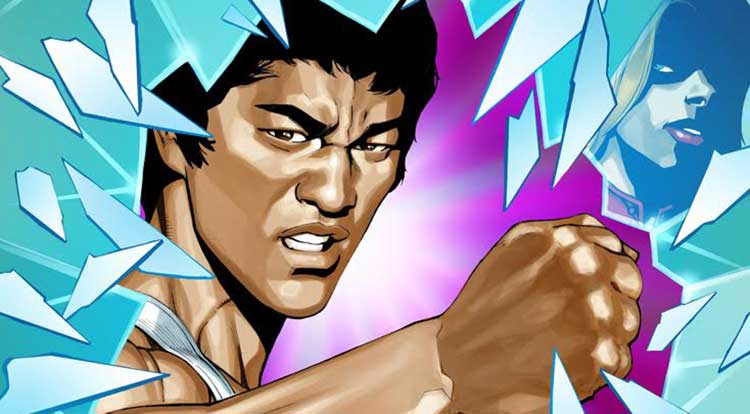 Darby Pop Publishing and Bruce Lee Entertainment are pleased to announce that they are collaborating on a new comic book titled Bruce Lee: The Dragon Rises, which will chronicle the return of the beloved actor, philosopher, teacher and – of course – martial artist in a present-day, all-ages comedy/action/adventure. The first issue is being co-written by Bruce’s daughter, Shannon Lee, and Jeff Kline (Jackie Chan Adventures, Indestructible) with art by Brandon McKinney (Godzilla: King of the Monsters, Doberman) and cover art by Bernard Chang (Green Lantern Corps, Indestructible).

Bruce Lee never died. And he hasn’t aged. But, he has no idea who he is, what’s happened in the world in the past 40+ years, or why so many “thugs” want a piece of him. With the help of a fly BFF from the ’70s – Joe Toomey, P.I. – and a pair of precocious Teens, Bruce will piece together a mystery more insidious than ever imagined, and find himself forced to do battle with both an enigmatic Villain and his very own conscience. In other words, the Dragon rises… and “walks on” once more!

The 48-page oversized first issue, Bruce Lee: The Dragon Rises, will be available in April 2016 at comic book retailers and online. But, well in advance of that, Darby Pop Publishing and Bruce Lee Entertainment will be hosting a special signing at Stan Lee’s Comikaze Expo 2015 on Saturday, October 31st at Booth #907 from 11am to 2pm with Shannon Lee, artist Brandon McKinney and cover artist Bernard Chang autographing limited-edition free posters of the #1 cover and discussing the creative process behind the new book. Throughout the convention weekend, Darby Pop Publishing will be giving away both Bruce Lee-related and other freebies including tattoos, stickers, bookmarks, and more. Other members of the Darby Pop “family” will be signing and chatting throughout the entire convention.

Founder Jeff Kline started Darby Pop Publishing with the goal of using the visual medium of sequential art — aka comic books — to tell all-new stories. As a life-long lover of the form, Jeff convinced a small circle of his movie/tv friends to join him as he “broke into” comics after writing/producing nearly 1000 episodes of television over the past two decades. Two years and 40+ books later, Darby Pop Publishing continues to be creator-owned, and a labor of love.

BRUCE LEE ENTERTAINMENT, LLC a production company with exclusive access to international icon Bruce Lee’s name, likeness, story, copyrighted and unfinished works and trademarks, aims to work with select, like-minded partners to create and produce content in all media that honors, embodies and upholds Bruce Lee and the Bruce Lee legacy not only as a source of entertainment but a continued source of motivation and inspiration for people the world over. Owned and operated by Shannon Lee, Bruce Lee Entertainment is a subsidiary of Bruce Lee Enterprises, the exclusive owner of all rights and marks relating to the use of Bruce Lee’s name, image and attributes worldwide.