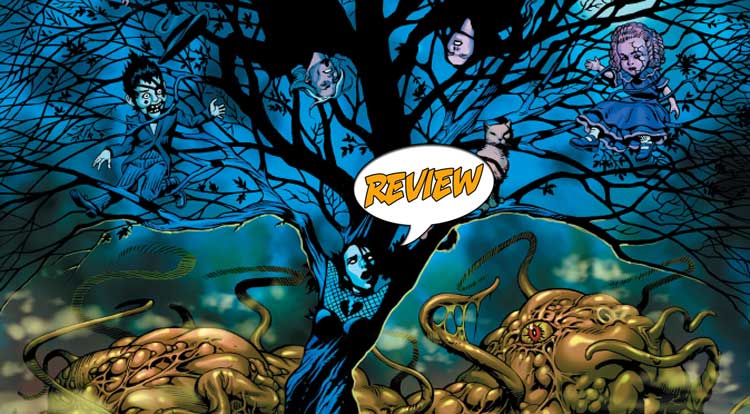 The DCU’s weirdest title is back for another disturbing-yet-touching (in all senses of the word) installment.  Your Major Spoilers review of Secret Six #7 awaits! Previously in Secret Six: The mysterious Mockingbird who has been manipulating the Secret Six has been revealed as Batman’s most circuitous foe, The Riddler!  Last issue led to a massive confrontation between Riddler’s forces and the members of the Six, with Big Shot (secretly the former Elongated Man, Ralph Dibny) being caught in the crossfire, thanks to Riddler’s control of his wife, Sue.  The Six narrowly escaped death-by-explodlecatin’, and now their biggest question seems to be: What now?

(Also, Ferdie the dummy is one of the creepiest things I’ve ever seen…  Seriously.  Gyaaaah!)

A COTERIE OF MYSTICS

Somewhere, in the mountains of Tibet, there is a hidden place called The House Of Strangers, a gathering place for all the most skilled magic-users of the DCU to gather and discuss their mystical bailiwick.  Today’s topic: The loss of magic, or more precisely, the draining of magic by unknown means.  Or, at least, it was unknown, as Doctor Occult has gathered a group of magic-users (including Felix Faust, Swamp Thing, Baron Winters, Zatanna and more, including The Cheetah and Blue Devil) to announce that the reason for the drain is none other than Black Alice.  While the Strangers (a name which feels odd, given the presence of The Phantom Stranger in these pages, but that’s a minor quibble) decide what must be done about Alice, Catman, Strix, Porcelain and Ventriloquist are enjoying some downtime together.  Basketball goes poorly (when told the point is the take the ball from him, Strix smashes Catman in the nose, climbs a tree and declares herself the winner), miniature golf goes somewhat better, but things get awkward when Etrigan The Demon arrives with a message.  Though the team is understandably shaken by a seven-foot flame-breathing rhymer demon, Etrigan has instead brought a warning that the council is coming after Black Alice.  It’s no news to Big Shot, however, as his vigil at Alice’s bedside is interrupted by Cheetah and Black Orchid, leading to a terrifying cliffhanger ending that bodes poorly for all involved…

From the storyline perspective, I love this issue, and enjoy the various cameos (such as Equinox from Justice League United, and Zatanna herself) but the whole thing doesn’t feel entirely moored in the New 52 for me.  I would have sworn that Blue Devil’s origins were different in the new continuity, and while I’m happy to see Doctor Occult and Deadman again, their characterization feels more old-school.  Now that I think of it, it’s less a complaint than it is a housekeeping issue, as I prefer Simone’s take on most of these guys, even with the few lines they get in during the issue.  The art is credited to regular artist Eaglesham and to Tom Derenick, without identifying who did what, but I can’t really tell how the split might have been done, as every page looks wonderful, and full of details (Catman’s sneakers melting during his attack on the hellfire-spewing Demon are awesome) and the final page may be the most creatively scary thing I’ve read since…  Um..  Since that last Gail Simone comic I reviewed for Major Spoilers, actually.  The secret magic worlds of the DC Universe seem to be a little bit underserved since the cancellation of Justice League Dark (although I guess Dr. Fate and Constantine still have their own books), so I’m all for more dark and arcane exploration, especially when it looks this good.

This issue balances comedy, horror and mystical blah-blah-blah fish cakes with aplomb, and has some really lovely art (especially in the hidden stronghold of the magic-users) which leaves Secret Six #7 with a very impressive 4 out of 5 stars overall.  If you just throw yourself into this one, it becomes a very rewarding experience, and the character moments are well-balanced with plot for maximum entertainment value.  (Bonus points for including Blue Devil and Black Orchid.)

Mini-golf, magical crisis, and Ferdie in a cheerleader uniform: It's an issue that's by turns funny, suspenseful and terrifying, with a bunch of lovely guest-stars.