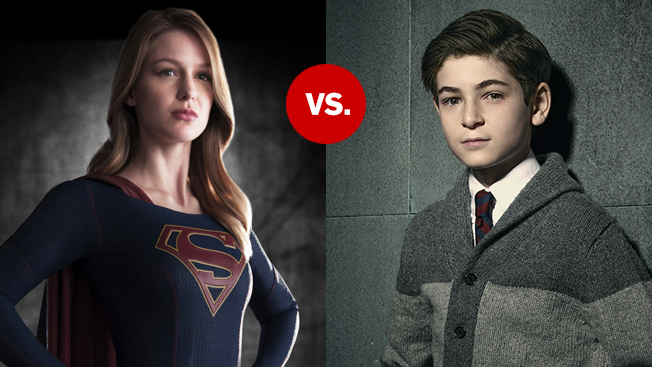 And you thought Batman vs. Superman: Dawn of Justice was going to be an epic fight! Well, tonight begins the latest battle between two DC Comics properties on local television – Gotham up against Supergirl!

It’s the kind of thing that ends up discouraging comics fans from wanting their heroes on the small screen. Tonight at 8 p.m., the latest episode of Fox’s Gotham will air until 9 o’clock. Whether you watch it or not – some fans won’t watch it because Batman hasn’t appeared on it – it has completed a successful first season and is headlong into its second.

However, this is also the night when Supergirl debuts on CBS. First up at 8 will be the highly popular Big Bang Theory, then the Girl of Steel will follow at 8:30 and will run until 9:30 p.m.

Now, if you have a digital recording system that can record more than one program at a time, you can easily get both shows and watch them at your leisure. If you don’t, you have a decision to make. If you don’t like Gotham, cool, you can view Supergirl. Or if you don’t care for Kara, you can stick with all of the show focusing on Bruce Wayne and Jim Gordon.

If you want to watch both, Fox has episodes on their website the following day for free. CBS, however, makes you pay when you go here.

THIS SHOULD NEVER HAPPEN

Warner Bros. is always thrilled to get their properties on the small screen. And DC characters have been scoring well on television, including Arrow, The Flash and the upcoming Legends of Tomorrow. Constantine didn’t do well on NBC on Fridays, but the main character will make an appearance on Arrow soon. There’s even an animated Vixen taking place!

What drives me crazy is that Warner Bros. let this happen! They should have it in their agreements with every single network that if a DC property is already on the air, the new program or any portion of it CANNOT appear during the same time period. If Gotham is on at 8, then run Supergirl at 9. It’s truly insane to make comics fans, particularly those of the same company, have to choose between two of their heroes.

Also, does anyone remember several years back when CBS screwed The Flash over big time? It was on Thursday nights against The Simpsons, which clobbered it. In order to let fans of that animated show watch Flash, they moved it from 8 to 8:30 with very little notice.

Now, any long-term viewer of the tube like me knows that an hour-long show rarely if ever survives when it starts on the half-hour. I frankly can’t think of any that have even survived a season. And that’s what happened with The Flash – it never built the audience it deserved.

Add to this the fact that when the NFL on Thursday night leaves CBS to go back to the NFL Network before long, CBS will very likely return Big Bang Theory to that evening at 8 p.m. What will they do with Supergirl at that point? The smart thing would be to shift it to 9 on Monday, but it’s much more likely that they’ll try to screw fans of Gotham and Fox over by putting it head to head against that show at 8. Sigh.

There have been times in the past where the networks have pitted comic-related shows against each other. Now, what happens when they do that? The audience will have to choose which one to watch, and that will split them into smaller groups. Often the viewership of each show ends up being so low that the networks end up eventually cancelling both, and the assumption is that, well, golly gee, comics fans just don’t support their heroes on TV! So fewer and fewer comic-related shows end up being aired. I just hate it when we get treated that way!

ABC was smart when they realized Marvel’s Agents of S.H.I.E.L.D. would end up against The Flash on The CW. They moved it an hour later, at 9, and the show continues on even if it is against another comics show, iZombie. Augh!

I’m fortunate in that we have DirecTV where I live. We’ll watch both shows in whatever order we want since we’ll have them both recorded. Many fans of comics are tech-savvy people, so a lot of us will have Comcast and other systems where we’ll be okay.

If you don’t have this possibility, I would suggest sending emails or making phone calls to the CBS station in your area. Tell them that you’d watch Supergirl, but they have it up against another DC Comics property. If they just would move their show to 9, you’d be happy to watch it (and buy the products advertised on it, of course).

You can also call your local Fox affiliate, but since Gotham was on at 8 last season, they’re not as likely to be influenced by your communication. But it’s still worth a shot! If Supergirl starts to win out over Gotham in the rating, Fox might seriously consider shifting it to 9 since they have voiced their support for it. But that’s risky since some people who are used to watching it at 8 might not realize it’s on at a new time.

I WILL SUPPORT BOTH SHOWS

I really loved Gotham Central, the comic that Gotham reminds me of a lot. I understand the desire to have Batman on the program, but the comic was excellent, much like the program is, in my opinion.

I have to say that I’m more worried about Supergirl. In the comics, the Girl of Steel has very few villains of her own, often facing her cousin’s baddies. She also borrows a lot of her supporting cast from Superman, including Jimmy Olsen, who will appear on this new CBS show.

To make Supergirl shine, they need to accomplish many of the things that Batman: The Animated Series did. Redefine villains to make them better, if you have to. Come up with new foes to test Kara. Give her people around her that we’ll like and aren’t necessarily from Clark’s immediate circle of friends. When I look at all the wonderful characters B:TAS added to the Dark Knight’s books, such as Harley Quinn, it’s very possible! And with the folks in charge who have gained my confidence with their work on Arrow and Flash, I’m very optimistic. Oh, and yeah, I DO want a crossover regardless of what network which show is on!

I also hope DC is paying attention! I still think Supergirl deserves her own title, and I’d also enjoy seeing a series based on Gotham! What do you think, Mr. DiDio and Mr. Lee?