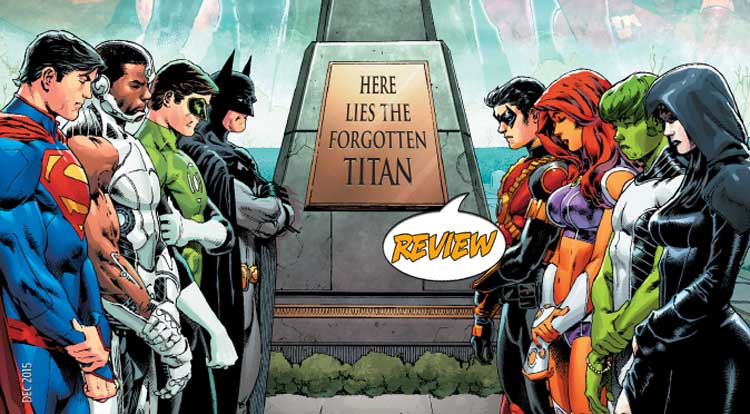 Ever since the Flashpoint retcon, the people of the DCU have been back and forth on the question of whether or not the Teen Titans ever even existed.  We, as readers, have been chalking it up to editorial indecision, but what it there has been something more sinister going on?  Your Major Spoilers review of Titans Hunt #1 awaits! Previously in Titans Hunt: In previous iterations of reality, the sidekicks of Batman, Green Arrow, Aquaman, Flash and Wonder Woman (who never had a sidekick, long story) banded together to fight the ills of society with teenage ambition and some of the weirdest slang you’ll ever hear short of a Jim Shooter Legion of Super-Heroes comic.  In the New 52, that history was negated…

We open with young Roy Harper, driving through remote Oklahoma, doing his Arsenal thing and basically just sort of being an intinerant jerk, when he is suddenly prepossessed by the shape of the local water tower.  Confused by the shard of memory, Roy can’t quite put his finger on why a structure shaped like a capital “T” would mean anything to him, and so he does exactly the wrong thing, buying a bottle of whiskey in preparation for getting royally plastered.  The counterman, a strange lad named ‘Gnaark’, knocks the bottle off the counter, and when Roy catches it, he remarks, “You’re Speedy.”  At the same time, Dick ‘Grayson’ Grayson is on a mission for his counterintelligence masters, Spyral, tracking down an organ trafficking ring that specializes in metahuman organs for the rich and obscenely powerful.  (Emphasis on “obscene.”)  The group’s attempt to sell Atlantean lungs to a sick old man goes awry when an actual Atlantean (whose blue undersea camouflage uniform should feel familiar to long-time Titans fans) shows up to bust up their operation and ruin their day.  Things pick up quickly from there, as Dick has a strange flashback at the sight of the Atlantean’s whirlpool escape, only to have a telepathic conversation with a woman he doesn’t remember knowing.  Somewhere in Hollywood, screenwriter Mal Duncan has his own memory issues, and a mysterious brunette woman is seen loitering around an abandoned clubhouse, leading us to the reveal of addiction counselor Lilith Clay, whose filing cabinet is full of folders marked with names: Speedy; Hawk; Dove; Robin; Aqualad; Caveboy; Herald.

…WHOSE ANSWERS ARE LONG PAST DUE

I’m going to be honest with you: I’m one of those readers who was a little bit upset about the removal of the Teen Titans from continuity in favor of younger versions of the main heroes.  Sure, I get the impetus to make Batman, Flash and the rest younger and more “edgy”, but it seemed like a real waste to eliminate the rich history of the teenage heroes for editorial fiat, so I’m onboard with this “fix fic” to explain what might really have happened.  Heck, some of the best stories in comics history have been this sort of continuity patch (“Who Is Wonder Girl?” comes to mind, Captain America’s battle with the Supreme Director, ‘Flash Of Two Worlds’ and more) so I can’t be too bothered by the fact that, as a reader, I can tell how this particular sausage is being made.  This story is an intriguing one, using the Roy and Dick Grayson well, reintroducing other heroes in ways that are both familiar and exciting, and doing so with some really phenomenal are by Siqueira and Borges.  The fight sequence featuring Grayson in action has echoes of Rags Morales excellent work, as well as elements that feel like Jose Luis Garcia-Lopez, which is high (but deserved) praise from me.  The idea of a secret history so dangerous that it had to be erased from the minds of the heroes involved is a great hook, and I like the fact that the cover hints at the involvement of the New Teen Titans as well.  (Let’s hope it’s not lying to me, or I’ll be super-irritated.)

THE BOTTOM LINE:THIS HAS POTENTIAL

Given all the gymnastics about whether or not there ever was a Teen Titans that we’ve seen since 2011, this story is one that is well overdue, and even the fact that it’s probably motivated by the idea of getting a Titans team on TV in the next couple of years doesn’t deter the fact that the creators are telling a good story and doing it skillfully.  Titans Hunt #1 had the potential for disaster, but instead is setting itself up to be a game-changer for the Titans, and it’s frankly about time, leaving us with a well-deserved 3.5 out of 5 stars overall.  If nothing else, this is a good story featuring Arsenal and Grayson, and finally returning some semblance of the original Wonder Girl to continuity, so it’s all right by me..