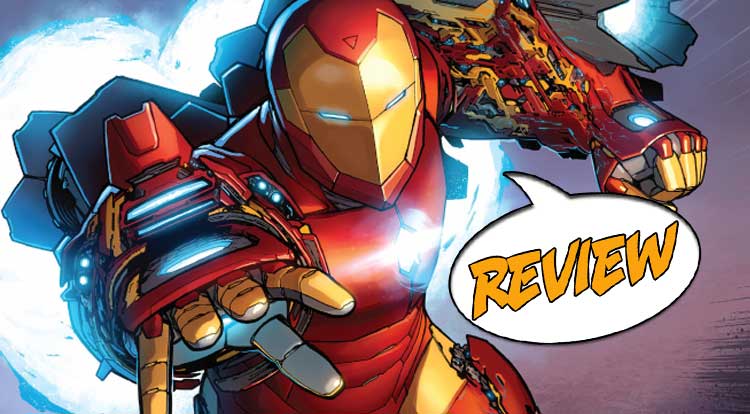 The secrets of post-Secret Wars Marvel Comics are slowly unfolding, including the location of a major-league villain.  How will Iron Man deal with the return of one of the worst of the worst?  Your Major Spoilers review of Invincible Iron Man #2 awaits! Previously in Invincible Iron Man: Having created his most powerful and versatile suit of armor ever, the all-new not-really-at-all-different Iron Man has a new lease on super-life.  With the help of his brand-new A.I., Friday (whose holographic interface bears a resemblance to the currently missing Pepper Potts), he has made his way to a destabilized Latveria to try to find out why Madame Masque broke into Castle Doomstadt and what she might have stolen, only to discover an old rival amidst the ruins…  Victor Von Doom!

A NEW FACE FOR DOOM

After last issue’s stunning final page reveal of a once-again-handsome Victor Von Doom, we open with a slightly panicked Iron Man scanning by every means possible to confirm the identity of the man before him.  In a moment that is both incredibly genre-savvy and a little bit disturbing, at the very second that he has a positive ID, he opens fire with the full extent of his repulsor power.  Of course, when Doom effortlessly deflects the barrage, it becomes clear that he was right… sort of.  Doom refuses to return his attacks, and calmly explains what is going to happen: They are going to become friends.  Their interplay and dialogue is wonderful, making it clear that Victor is every match for Tony’s wit, and Doom even explains what Madame Masque was after: The Wand Of Watoomb!  Or rather, a Wand of Watoomb, since there is now canonically more than one of ’em, but what Masque wants with such an artifact is left undiscussed, and Doom rather dramatically ends their confrontation by teleporting Iron Man all the way back to New York with a wave of his hand.  The second half of the issue is an emotionally fraught face-to-face between Tony Stark and Whitney Frost that ends with a VERY surprising moment…

I’m actually quite happy to see Madame Masque once again getting treated as a major threat (although, since it was Bendis’ own run on Avengers that devalued her villainous stock in the first place, this may be more a ‘making right what once went wrong’ thing), and the new status quo for Doom is pretty nicely handled, as well.  It positions him perfectly to be Iron Man’s new big bad, making him a match for both Stark and Iron Man, and also keeps him in circulation in a Fantastic Four-free world.  Though the dialogue and emotion are well-done throughout the issue, the real star is the art of David Marquez, whose armor-work is phenomenal (when confronted with Doom, Tony quickly morphs from baseline to Hullkbuster, and the visual representation of the transition is excellent) but whose real genius comes in faces and facial expressions.  (The gold filigree that he has added to Madame Masque’s trademark faceplate is flat-out beautiful.)  Though the coloring doesn’t always keep up with the strength of his line work, this issue is a visual treat from start to finish, and I have to once again express joy that they’ve gotten rid of the mandrill-faceplate that Iron Man has had for over a decade.  Let’s hope that it stays gone…

THE BOTTOM LINE: STILL WORKING FOR ME

In short, this issue continues the measured reveal of Iron Man’s world, using Doom and Masque to great effect, and even leaving the occasionally obnoxious main character better off.  Having someone who can play on Tony’s level both in and out of his armor is gratifying, and Bendis does a great job of capturing Robert Downey, Jr-style dialogue, making this one of my favorite Iron Man takes since Fraction left the book.  Invincible Iron Man #2 makes it all look easy, with strong plotting, good dialogue and excellent art throughout, giving the armored Avenger a lovely new lease on super-life, earning 4 out of 5 stars overall.  I really want more of this Madame Masque…