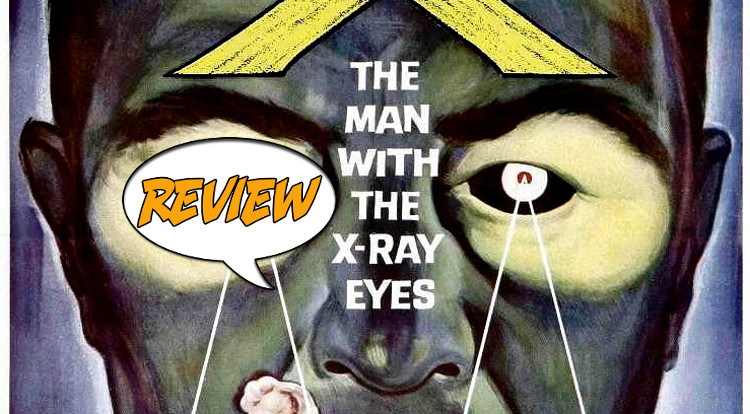 Friday Night Frights: X: The Man with the X-ray Eyes

X-ray vision is a commonly requested superpower, but what if it’s not all that it’s cracked up to be? What if you couldn’t turn it off? This week’s Friday Night Fright answers that question, as we follow one man’s descent into supervision in X: The Man with the X-Ray Eyes!

Roger Corman is legendary in Hollywood, proving that quantity has a quality all its own. The prolific director is credited with over 50 films, while producing over 300. He has mentored the likes of Martin Scorcese, Ron Howard, James Cameron, and Francis Ford Coppola, while churning out disposable pop fare fit only for the drive-in. And there is not a thing wrong with that, in the opinion of this humble reviewer. X: The Man with the X-ray Eyes is one such film, made on the cheap, clocking in less than eighty minutes, and with more character than a film twice its budget. It is a classic story of super-scientific experimentation gone too far, as the main character self-experiments on himself to enhance human vision, with expectedly awful results. Ray Milland’s Dr. James Xavier (brother to the founder of the X-Men?) is never a particularly warm protagonist. He starts out weird and prickly and only descends from there into utter and total madness. Brimming with hubris, he has a decent goal; he wants to make diagnosis easier in hospitals, through the enhanced eyesight of doctors rather than relying on clunky, time-consuming x-rays. But Xavier keeps pushing and pushing, until he pushes a colleague out a window and is forced to join the circus on the lam, as one does in stories such as these. And from there, madness.

“MY DEAR DOCTOR, I AM CLOSING IN ON THE GODS”

X: The Man with the X-ray Eyes works as a sort of proto-body horror film, with its obsession with the human body, strange special effects and mind-bending ending. By today’s standards, it is rather tame – only one guy eats it, and via a somewhat accidental defenestration at that. But it has a few elements that stick with the viewer. Milland’s Xavier is a compellingly odd duck, all the more so when he’s forced to wear welding goggles and deliver strange soliloquies about rotting cities. He never loses his haughty demeanor, even on the brink of madness, but there’s no joy in his transformation, just fascination. Don Rickles does a good job as his carny mentor/exploiter, who guides Xavier (who he dubs “Mentallo”) from the carnival back into the city in a pretty warped way. The special effects are definitely dated, but still charmingly odd, and it all adds up to a film worth some watching.

BOTTOM LINE: WORTH AN EYEBALL

A product of its time, X: The Man with the X-ray Eyes has a few issues. For a movie that’s less than an hour and a half long, there is too much padding and too many pacing problems (such as a car chase sequence that somehow occurs with only one car). What sells the film is Milland’s gripping performance and a totally bonkers ending that is justifiably legendary. X: The Man with the X-ray Eyes opens with an uninterrupted shot of a severed eye, contains the line “I’m not a monkey, I’m a man!,” provides one scene of doctors awkwardly dancing The Twist, one dead monkey, one dead body, one defenestration, one instance of open heart surgery, card sharking, one-armed banditry, and an answer to the secret of what’s at the end of the universe. Check it out.