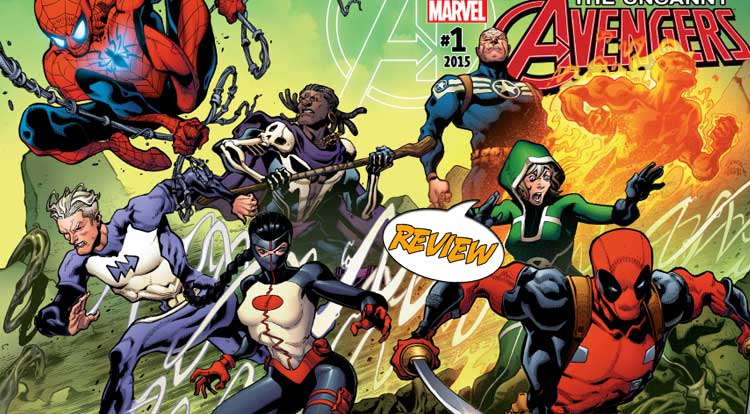 Previously in Uncanny Avengers: “After the war between the Avengers and the X-Men, the original Captain America, Steve Rogers, brought together members of both teams to form the Avengers Unity Squad.  The team was designed to show the world that mutants and humans could work together.  (It didn’t always work out the way it was supposed to.)  Now, to promote cooperation in the face of rising tensions, the Unity Squad has expanded to include a new faction…”

TURNS OUT IT *WAS* JOHNNY STORM

With all the teasers for the post-Secret Wars material floating about, much speculation was made about the identity of the Human Torch in these issues, and this issue quickly establishes (through a big ol’ fight sequence) that it’s Johnny Storm, finally finishing the clean sweep of ‘Fantastic Four member who are also Avengers’.  The rest of the team (Deadpool, Doctor Voodoo, Rogue, Inhuman telepath Synapse and Spider-Man, with Quicksilver absent) are introduced fighting the Super-Adaptoid on the steps of the Lincoln Memorial, a battle which ends with Deadpool single-handedly making a rash decision that defeats the ‘bot.  Things are tense with the Unity Squad, though, as Spider-Man immediately quits the team over Deadpool’s foolishness, Rogue is shown to be uncomfortable with both a public presence and the effects of Terrigen poisoning, Doctor Voodoo is unhappy with the team’s new headquarters, and Captain America is just basically a cranky, headstrong old due throughout the issue.  There are some lovely moments (a conversation with a ghost, jokes about Deadpool’s rogue’s gallery, and Quicksilver learning to relax now that he’s no longer believed to be the son of the world’s worst mutant terrorist), but the pacing feels uneven throughout, and a LOT of “you totally missed this thing in the missing months” plot points fall flat for me.

DEADPOOL IN AN ASTONISHING NEW ROLE

Also clever: Captain America, refusing to take money from corporate interests or governments, instead using Deadpool’s fame and fortune to bankroll the team by merchandising his likeness and image.  It’s a weirdly meta moment, made even worse by Cap’s refusal to even discuss with Spider-Man why he’s so dead set on having ‘Pool on board.  Given that writer Gerry Duggan recently came off DP’s solo book, the story feels disproportionately Deadpool-centric.  That’s not necessarily a bad thing, but it’s one that doesn’t really work for me as a reader, and things are made more off putting by the cartoonishly lumpy art that Stegman delivers here.  It’s a style that works for the Guardians Of The Globe, or maybe even for a Spider-Man solo book, but one that makes Rogue and Synapse look balloony, makes elderly Steve Rogers look like a The Crypt-Keeper, and makes the battle sequences harder to follow.  The introduction of a new foe, The Shredded Man, has potential, but his reveal is once again hampered by the bulbous linework.  Quicksilver’s new costume is another strange moment for me, as I like the general concept by the presence of a music player’s fast-forward symbol as his chest emblem is… a puzzlement?  I honestly can’t decide whether it’s a moment which marks the narrative as genius or cheese sandwich, and it’s only one of several such moments in the book.

THE BOTTOM LINE: NOT MY FAVORITE AVENGERS RELAUNCH

The unspoken truth of the Avengers in the last decade or so, though, is that if you don’t like one team, there’s always another.  I’m looking forward to Kamala, Miles and the All-New All-Different team, and I greatly enjoyed the first appearance of Sunspot’s New Avengers team this week, but this team just may not be for me.  Uncanny Avengers #1 has some very clever bits in it, a cast of characters that has a lot of unusual potential, but haphazard plotting, unappealing art and a preponderance of Wade Wilson throws the balance of this issue off for me, leaving it with a still-above-average 2.5 out of 5 stars overall.  There is certainly good stuff here, and it should be noted that I had similar problems with the earlier Rick Remender volume of this title that the narrative was able to overcome, so there is hope for the Uncanny Avengers in their latest incarnation…