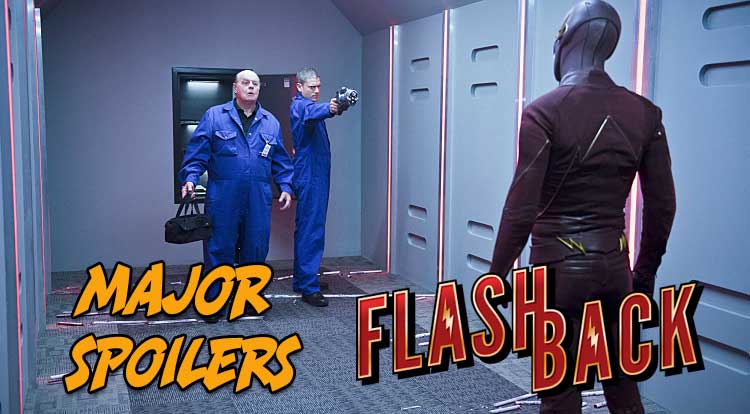 Barry and Lenard team to bring down Snart’s father, while Cisco gets a little lovin’. WHAT IS GOING ON!? It’s a look back at this week’s installment of The Flash.

Barry and the team ally with the kidnapped Captain Cold’s sister, but Barry feels duped with he learns Snart is working on something with his father; Joe faces a difficult decision.

Captain Cold (played by Wentworth Miller) first appeared in Showcase #8 (June 1957) and was created by John Broome and Carmine Infantino. We first talked about Captain Cold in our look at the Going Rogue episode. This week, Cold must come to grips with his promise to The Flash to not kill people, while trying to save his sister. As the episode ends, Barry mentions to Leonard that there is good inside that wicked mind, thus setting up Captain Cold’s membership in DC’s Legends of Tomorrow coming early next year. By the way, if you are a fan of Captain Cold’s cold gun, the January 2016 solicitations that were just released has DC Collectibles selling a full size prop replica of the gun for $300. The prop is modeled from the actual gun used in the television series, but even if you order it now, you won’t be able to get your hands on it until May of 2016… right about the time this season comes to an end. Lisa Snart/Golden Glider (played by Peyton List) ends up being the damsel in distress this week. Created by Cary Bates and Irv Novick in June 1977, Golden Glider was always trying to prove that she was better than her brother. Her figure skating career came to and end, when she fell in love with Roscoe Dillon (aka The Top), and her life of villainy started when he was killed fighting The Flash.

Lisa Snart first appeared in Revenge of the Rogues (S1E10), but we didn’t get to see her face until the Rogues resurfaced in Rogue Time (S1E16).

Lewis Snart, the father of Lisa and Leonard Snart, appeared in comics during the Final Crisis: Rogues’ Revenge story arc. In the story, Leonard has to rescue his father from a new set of Rogues, and during an exchange, he confronts his father over the years of abuse he received while growing up. Leonard ended up spending more time with his grandfather, who worked in an ice truck, and only started committing crimes to get away from his abusive father. Interestingly, Captain Cold was never able kill his father in the comics (unlike this week’s episode), instead relying on Heat Wave to do the job.

When it comes to bad guys, Lewis Snart is one of the most vile we’ve seen in the series. The guy has no problem putting a bomb in his own daughter’s head, and blowing her head off, if Leonard doesn’t do what he’s told….Wait a minute… an exploding bomb in someone’s head? That certainly sounds like something that would be done to someone in the Suicide Squad… hmmmmm. In regards to Barry’s introduction to Lewis by saying,”Hi, I’m Sam,” it’s definitely not a reference to the Sean Penn movie or a reference to Sam Scudder, the Mirror Master. Fans of Michael Ironside know him from such movies as Scanners and Total Recall, but he has been involved in other DC Comics projects over the years. He voiced Batman in the “Legends of the Dark Knight” episode of The New Batman Adventures, has been the voice of every incarnation of Darkseid in the DC Animated Universe, and he played General SAM Lane in the television series, Smallville. Interestingly, Peyton List was also in Smallville. She played Lucy Lane, Lois’s sister, and daughter to General Lane.

Was anyone else surprised to see Linda Park (played by Malese Jow) make a two-line appearance in this week’s episode? I like that the producers continue to insert recurring (and not dead) characters into the show as needed to make the show’s reality seem more believable.

Oh, you may think that the Speed Cannon was just a one-off joke to bring Cisco and Jay Garrick closer, but the cannon has appeared in comics- specifically Flash Volume 2 #321 (October, 2007). In that issue, Gorflack, a scientist of the planet Savoth, built a Speed Force cannon that didn’t work as intended. Instead of defending the planet from an alien invasion, it transported Jay Garrick through the Speed Force to Savoth, where he helped fight off the invaders. Garrick was later given a solidified piece of the Speed Force so he could travel to Savoth whenever he wanted.

Don’t you wish your barista would add a decorative Flash logo to your daily dose of cappuccino? While there are probably a few coffee cashiers who can deliver for you, you can also print your own 3D Flash logo stencil to shake just the right amount of cinnamon onto your cup of Joe.

We learn the mystery of what happened to Joe West’s wife this week, and like Harrison Wells, Francine West (played by Vanessa Williams, but not THAT Vanessa Williams) is an original character created for the show. While Iris was able to get over the shock of her mother’s return, I wonder how she will react when Wally West shows up in next week’s episode. Flash tracks Captain Cold to a building at the corner of 5th and Hoyt. Hoyt could refer to any number of things, including Mary Ann Hoyt from New Earth, or even Hoyt Curtin, who composed the famous Super Friends theme song.

★ Here are the opening intros to the various incarnations of the Superfriends TV series:0:12 SUPER FRIENDS (debut: September 8, 1973),1:12 ALL-NEW SUPERFRIEN…

Interesting. Flash was not an original member of the animated show, and only appeared in season 3 – the Challenge of the Superfriends. That means that Zan and Jayna (The Wonder Twins) were on the team before The Flash. Seems like huge error on Hanna-Barbera’s part.

The Fury of Firestorm

If you were wondering what was up with Dr. Stein, his fiery antics this week give us a hint that Firestorm is about to return. While Drakon Systems doesn’t show up in the comics, Constantine Drakon does, and that character has appeared previously in the Arrow TV series, as Adam Hunt’s head of security. The comic book version of Constantine Drakon first appeared in Green Arrow Volume 3 #27 (2003) and was created by Judd Winick and Phil Hester.

In comics, Danville is a middle class residential area that is the the home of Barry and Iris Allen.

During the Heist of the Week, the security guards are busy watching the Central City Diamonds (presumably in the playoffs – it is October after all) on the television.  The Diamonds first appeared in Flash (Volume 4) #32. It doesn’t look like anyone discovered Barry’s secret this week, but for those keeping track, here is the updated list!