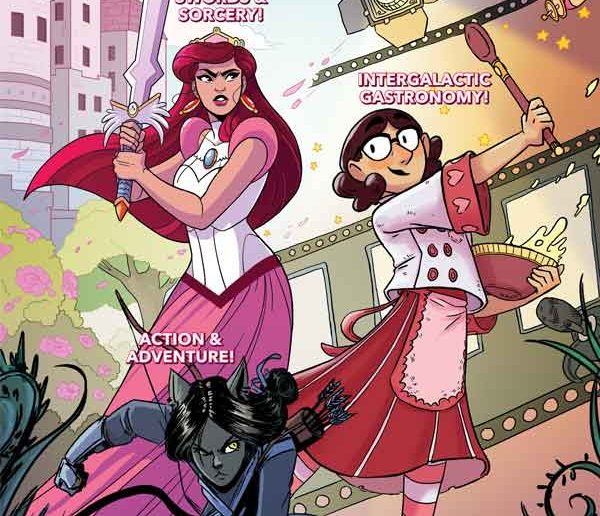 Another Castle is a sword and sorcery comedy starring a damsel in distress who doesn’t wait to get rescued, brought to you by writer Andrew Wheeler (editor-in-chief of ComicsAlliance) and artist Paulina Ganucheau (Zodiac Starforce).
Princess Misty of Beldora longs for a more exciting life, but gets more than she bargained for when she is captured by Lord Badlug, the ruler of the neighboring kingdom of Grimoire. He intends to marry her and conquer Beldora, leading the land into ruin and chaos. Together with the long-suffering citizens of Grimoire and a certain bumbling prince, Misty must fight to protect her kingdom and free both realms from Badlug’s tyrannical rule. This series is perfect for fans of Lumberjanes, Princeless, and Zodiac Starforce. After the Blue Dragon dies and the stars fall out of the sky, it’s up to the Zodiac Clan to collect them before the evil Moon Rabbit Army takes them for their own dark purposes. But there’s another hitch: the leader of the Zodiac Clan, Master Long, has fallen ill, and the stars could be the only thing strong enough tho save him. Last but not least, enter Space Battle Lunchtime by newcomer Natalie Riess, a high-stakes cooking competition in the far reaches of space! Peony dreams of being a world-renowned pastry chef, but for now she works at a bakery to get herself through school. But then she gets the opportunity of a lifetime – a recruiter is looking for contestants to a large cooking competition. What Peony doesn’t know is just how large – the contestants come from every corner of the universe, and the show is broadcast all over space! Peony may be out of her element, but with a passion for desserts, nerves of steel, and a little help from her friends, she might just have a shot at victory.
Coming Soon to a Comic Shop Near You arrives in local comic book shops on January 6, 2016.