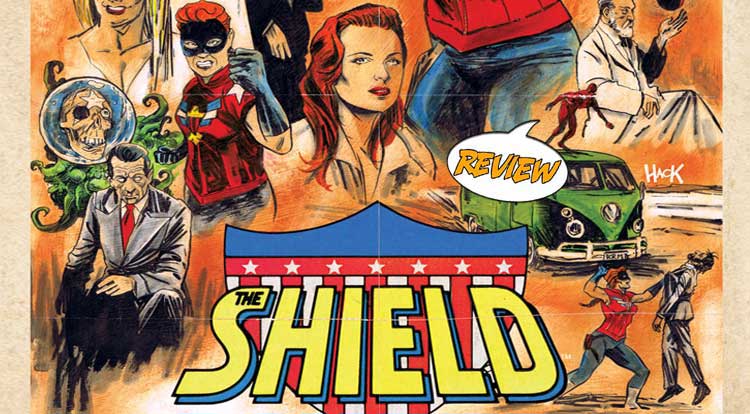 When Archie Comics announced their Dark Circle revival of their superhero character, the one I was most interested in finding out more about was The Shield, America’s first patriotic superhero!  Our wait is over…  Your Major Spoilers (advance) review of The Shield #1 awaits! Previously in The Shield: First appearing in Pep Comics #1, circa 1940, the original Shield was Joe Higgins, who completed his late father’s super-formula to give himself strength and invulnerability.  Applying the formula to specific regions of his body (Sacrum, Heart, Innervation, Eyes, Lungs, Derma, which by the way seems incredibly painful and unwise, given the formula’s untested nature), he became The Shield, G-Man extraordinaire.  Several other Shields have made their appearance (the last one in the DC Universe, as an attempt to streamline Archie’s heroes into the pre-Flashpoint DCU), but now a new claimant to the name has emerged in Archie’s new Dark Circle imprint…

Knowing the amount of effort that Archie Comics has put into rebranding and revamping their comic properties with the likes of ‘Afterlife With Archie’ and the other Dark Circle titles, I wasn’t sure what to expect from the adventures of a new Shield, but this issue starts of strong.  Beginning in the year 1776, we see the history of the new Shield in action with a very skillful five-page silent action sequence.  When the story shifts to the modern-day, there are a number of important questions raised about that flashback and what it means for the year 2015 and the advent of a modern Shield.  From a story perspective, the flashback are the most crucial (and also the most engaging parts) of this issue, addressing the hidden history of The Shield in America, tying that legacy to the earliest days of the United States of America.  As the story progresses, we also discover at least two other mysteries, leading to a strong cliffhanger ending and a life-and-death moment for our protagonist.

PUTTING THE ‘DARK’ IN THE CIRCLE

Like the Black Hood series before it, this is a very adult-oriented, very violent, very morally gray story, and one that I’m a little bit surprised to say fits this incarnation of the character perfectly.  There are several extended action sequences in this issue that show off the talents of Drew Johnson, including some stunning historical battlefield moments, but it’s worth noting that (aside from the excellent range of covers) there aren’t any costumed shots in this book.  The coloring here is the same muted tones that we’ve seen in the other Dark Circle books, something with may take a little getting used to, but works with the art and the story being told.  Maybe it’s the Golden Age origins of the characters, a time when brutal murder was just another tool in a hero’s repertoire, but these revamped Archie/MLJ heroes are adapting well to the new Dark Circle line, reminding me as much of the television program that shares the hero’s name as anything that has come before.  Though this first chapter does suffer at bit due to its length, it leaves me wanting to read more of the adventures of Victoria Adams and especially to see more of the 200+ years of history for this new Shield.

THE BOTTOM LINE: NOT YOUR FATHER’S SHIELD

Previous iterations of the Shield focused a bit too much on kid-appeal (the !mpact Shield) or military realism (JMS’ DC Red Circle revamp of a few years ago), but this book is a solid take on the character, bringing the Shield into the 21st Century with a bang.  The transition to a female character behind the mask is a welcome one, especially given the hints of what may have led to that in the past, as I’m always down for another kickass female hero in my comic book.  The Shield #1 is a good start for a veteran superhero property, and one that manages to keep the balance between mystery, action and story well, earning a well-deserved 3.5 out of 5 stars overall.  The creators have crafted a pretty excellent first chapter, and I’m looking forward to seeing how the story of Victoria Adams progresses…

(The Shield #1 will be available October 21st from Archie’s Dark Circle Imprint.)