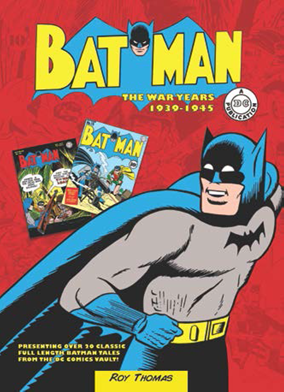 Three new books by noted comics writer Roy Thomas chronicles America’s greatest super-heroes and their involvement in World War II and how their stories helped lift the spirits of a weary country. Each hardcover book is over 300 pages, each presenting over 20 of the original comics in full-color.

Batman: The War Years 1939-1945 details The Dark Knight’s involvement in the war and his fight against some very real villains. Created in 1939, on the brink of World War II Batman, along with Robin, quickly became a hero to millions during a volatile and turbulent period. This new book presents over 20 classic full length Batman tales from the DC comics vaults. Preview the title here

Faster than a speeding bullet, more powerful than a locomotive, the Man of Steel is one of the most recognized characters in pop culture and has inspired millions, especially during wartime. Superman: The War Years 1938-1945 features over 20 classic stories, showing how Superman’s introduction at the start of World War II lifted the spirits of a weary country and brought people the hero they so desperately needed.

Wonder Woman, warrior princess of the Amazons, is among the most famous heroes of all time. From her introduction in 1941, she has been a shining example of feminism and the strength of womankind. But what was her role during the wartime of her creation? Wonder Woman: The War Years 1941-1945 details how she used her super speed, strength, and Golden Lasso of Truth during World War II to bring peace and justice to a turbulent world. Roy Thomas became writer/assistant editor for Stan Lee at Marvel Comics in 1965 after a very brief stint as assistant editor of DC’s Superman titles. From 1965-1980 and/or during the 1990s he wrote for Marvel The Avengers, The X-Men, Fantastic Four, Thor, The Incredible Hulk, Dr. Strange, Daredevil, Sub-Mariner, Avengers West Coast, The Amazing Spider-Man, et al.–including The Invaders, a comic which spun near WWII-period adventures of Captain America, the Human Torch, and the Sub-Mariner. In the ’70s he was the first writer and editor of Marvel’s Conan the Barbarian, The Savage Sword of Conan, and Red Sonja, whom he again authored in the 1990s. At DC Comics in the 1980s he wrote All-Star Squadron (a super-hero comic set in 1941-42), Shazam!, Secret Origins (retelling WWII-era origins of DC’s heroes), Wonder Woman, Superman, Batman, and other top series. He served as a Marvel editor from 1965-80, as Marvel’s editor-in-chief from 1972-74, and as a DC editor from 1980-86.

Since 1999 he has edited a professional Alter Ego magazine (130 issues so far and counting) and has worked with Stan Lee on the scripting of the Spider-Man newspaper comic strip. He currently also writes online strips of Tarzan and John Carter of Mars for Edgar Rice Burroughs, Inc.. For the German publisher Taschen he has written the humongous book 75 Years of Marvel: From Golden Age to Silver Screen, (released in late 2014) and is also writing an equally huge book about Marvel’s Stan Lee. Besides winning numerous other fan and pro awards in the comics field over the years, he was elected to comics’ Eisner Hall of Fame at the 2011 San Diego Comic-Con.