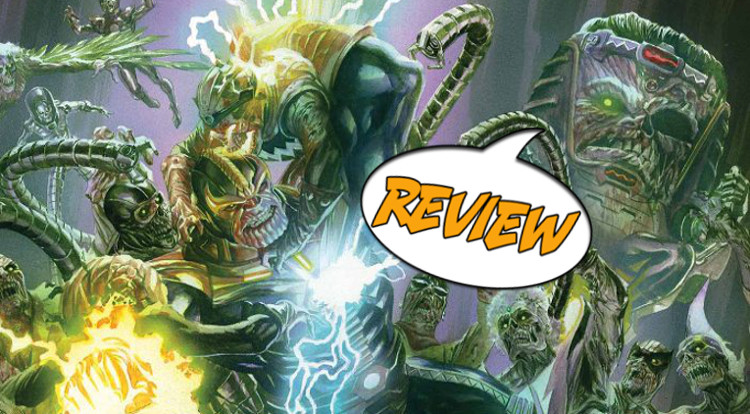 Nope, it didn’t end.  Secret Wars #6 has finally arrived but was it worth the wait?  What is Thanos going to do at The Shield?  Where does God Doom’s power come from?  These answers and more in the Major Spoilers review of Secret Wars #6!

Previously in Secret Wars:  After refusing God Doom’s offer of surrender, the survivors of the incursion are scattered across Battleworld by Doctor Strange.  Doom kills Stephen and in remorse, talks to Owen Reece the Molecule Man.  The three had used the Beyonder’s powers to save the universe and created the new world ruled by Doom.  Susan Storm and Doom’s daughter Valeria has been tasked with finding the survivors, leading her to more questions than answers. Thanos has arrived at The Shield:  the gigantic wall separating large areas of Battleworld, made up partially of the Thing, a former member of the Fantastic Four.

I TOLD PEOPLE TO READ SIEGE

It has been quite the wait between the previous issue of Secret Wars and this one and I wish I could say that it was worth it.  To be up front and bluntly honest, it’s not.  At least, not completely.  The biggest flaw is the story’s reliance on the tie-in titles for the event.  There are moments where I have no idea how characters came to be where they are and one I didn’t even know existed.  We finally get to see what the survivors of the incursion have been up to and it is greatly welcome considering they barely made an appearance since issue four.  They’ve been up to a lot it seems, and both Reeds are using drones to search for an energy source to Doom’s power.  It’s here that my first problem pops up.  Ultimate Reed Richards reveals that he is behind The Prophet, a leader of Doom deniers who are marching toward the World Tree to kill Doom.  This is the first I’ve seen the character or these events and I don’t even know which tie-in this is taking place, but it seems like too big of a plot point to be casually thrown in.

So far, I’ve loved that Secret Wars really felt liked it was self-contained and the tie-ins were ways to dive further into the world.  Questions like “Why is Captain Marvel now with Mr. Sinister in his bar?” and “Was I supposed to know Black Panther and Namor were crossing the World Sea?” took me out of a story I should be more involved in.  Don’t get me wrong, there is some great stuff.  The scene where both Spider-Men confront Owen Reece not only hilariously involves a three-week old hamburger, but also confirms what I have suspected for a bit:  Molecule Man is God Doom’s power source.  Franklin Richards has a bedtime story told to him after a day of fishing with Galactus and an Infinity Gauntlet is found by Black Panther and Namor.  The issue’s climax might be the series’ best so far and it’s unfortunate that it was also done better in another title.  I’ve been championing Siege as it ties with Secret Wars the best and with issue four out this week, the finale there is the same as Secret Wars only better.   Thanos talks with Ben Grimm (who is merged with The Shield), he convinces him to break free and go after Doom.  It’s a powerful moment but compared to Siege #4, it’s incredibly condensed.  I have a harder time believing Thing would be swayed by Thanos’s words from Secret Wars.  The scene is much more powerful in Siege, with stronger dialogue, bringing us back to the issue’s main weakness.  Plus, Secret Wars didn’t have “It’s clobberin’ time!”  Oh well…

Not much has changed about Esad Ribic’s artwork since the beginning of the series and that is a good thing.  His work remains as strong as ever.  Detail is fantastic and it’s amazing the amount of effort and care that is being put into each page.  The problems I have here are the same I’ve had from the start.  Facial expressions tend to look over-exaggerated and/or odd in dramatic moments.  Reed’s reaction to an image of Sue, and Sue’s happy expression as she retells the story of first meeting her “husband” are two stand out examples.  Coloring is nice as and still muted but I was glad to see some darker tones make their way in.  Unfortunately, I noticed a few minor instances where colors bled outside of the lines, and it wasn’t a printing error.  Not a huge deal by any stretch of the means, but unexpected.  All around great, high quality presentation for the event that we’ve come to expect.

Secret Wars #6 unfortunately, for the most part, wasn’t worth the delay.  Too much necessitates the reader having read or at least know what is going on in some of the tie-in books, a crutch the event hasn’t relied on until now.  This leads to confusion and frustration at moments that should be engaging.  Esad Ribic’s artwork is the strongest element and continues to look astounding.  There is still a lot to like in the issue, but a few shining moments and a great ending still don’t make a great comic.  Seeing how Secret Wars is now stretched to December, I’m worried it will become unnecessarily bloated.  Secret Wars #6 is the beginning of act three and while it isn’t the strongest, it does show promise for the events end.

Secret Wars #6 is a bit of a lull, confusing at moments due to story elements relying on tie-in titles too much, but the climax is a good one.