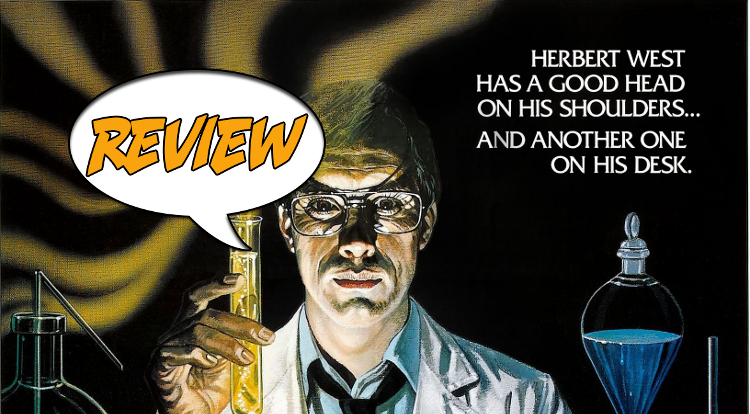 This year’s second Friday Night Fright entry presents the horror cult classic Re-Animator, a B-movie treat that the late, great Roger Ebert gave three stars. That places it in the same rarefied heights as other 3-star Ebert recipients such as The Godfather Part II and Speed 2: Cruise Control.

One of my goals this Halloween season is to dig into the great horror films that I have somehow missed in my cultural meanderings. Despite being a Lovecraft aficionado and a horror hound of the highest order, I have never seen Re-Animator, Stuart Gordon’s celebrated adaptation of H. P. Lovecraft’s ghoulish take on the Frankenstein archetype. I was not disappointed. Make no mistake, Re-Animator is not an artistic masterpiece like Nosferatu, nor does it provide any social insight as does Dawn of the Dead. It is straight trash, served American style, with gleeful helpings of gore, grotesquerie and humor, and absent any pretension.

HERBERT WEST, THE WORST HERO YOU COULD ASK FOR

Re-Animator, unsurprisingly, is all about re-animating the dead. And as you can guess, the results are not spectacularly successful. At Miskatonic University, Dan (not Dean) Cain is a promising med student, dating the dean’s daughter on the down low, and being a generally boring dude. Enter the fantastically creepy Herbert West, obsessed with the idea of curing death. Somehow he has created a glowing green “reagent” that will revive the recently dead. Except they’re usually pretty gross and angry about it. Shenanigans ensue.

The only real weakness with the movie is that it slows down whenever we’re with the very bland Dan Cain and his girlfriend Megan. Cain is so whitebread that it isn’t convincing at all when he goes along with West’s obviously insane schemes, and the romance with Halsey is just dull. But Re-Animator crackles whenever Jeffrey Combs as Herbert West is on screen, generating a manic sense of singular obsession. I have never seen a character so excited to find a basement for his deranged experiments. While Cain is the audience surrogate, West is the true protagonist, who generates the entirety of the plot. The sleazy neuroscientist Dr. Hill is his perfect foil, even before his head gets cut off and carried around by his animated corpse-body. Once the body count starts rising, you can trust that the neon green reagent will be stuck into anything and everything, and things get truly wild. Re-Animator gets pretty depraved with the action, but when you have a bunch of naked morgue zombies running around, you wouldn’t expect anything less.

Re-Animator turns 30 on the 18th of the month, which is a crazy thing if you’re still awed by the linearity of time. For the rest of us, Re-Animator is a solid, singular B-movie trash fest with a deserved reputation. It’s gross, funny, entertaining, offensive, and better than any Eli Roth joint I’ve seen. The Joe Bob counts for this one are as follows: 4 exploding eyeballs (2 within the first five minutes), one dead cat, one reanimated cat which looks suspiciously like a backpack, Croquet Mallet Fu, Bat Fu, Bone Saw Fu, Wall Fu, Door Fu, various other Fus including gurney, syringes and innards, one lobotomy, one incidence of depraved corpse congress, at least three bodies, plus whatever’s lying around the morgue. Check it out.