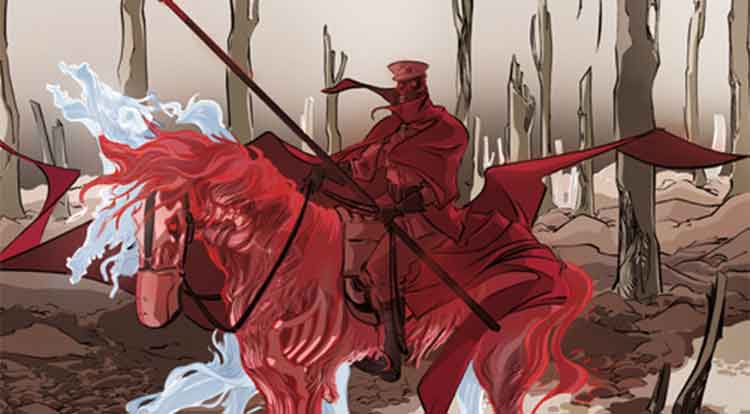 Previously in PRETTY DEADLY, vengeful reaper Death-Faced Ginny ushered in a new cycle, with the help of a handful of archetypal figures, all deeply intertwined in her origins.

In PRETTY DEADLY #6, the survivors of the battle against Death enter a new century, where they face fresh violence and the horrors of war.

“The second arc moves forward in time a bit. Sissy’s reapers are trying to clean up the mess the previous Death left,” said DeConnick. “Meanwhile, Sarah’s an old woman now and her family has gathered to say goodbye, but when her reaper comes, a request is made; her youngest has gone off to fight the great war—let her linger long enough for him to come home? Ginny and Alice have one cycle of the moon to find the boy and bring him home, but the worlds of the mortals and the immortals are at odds, as one of the errant reapers also has his eyes on Cyrus.”

“If you expected violence in the far west, prepare for the trenches,” said Ríos.