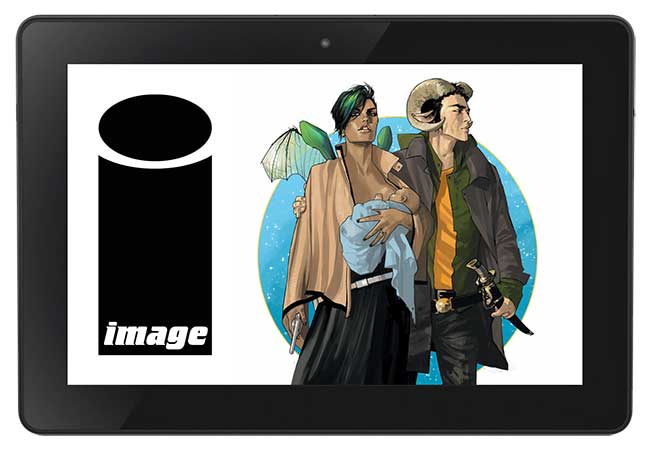 Image Comics, comiXology and Amazon announced today an expanded and renewed distribution agreement to sell Image Comics’ digital comics and graphic novels across the comiXology platform and expand the distribution of their library to the Amazon’s Kindle Store.

To celebrate, Image Comics’ most popular series will be made available for 50% off or more, including The Walking Dead, the long running, bestselling, award-winning series that the TV show of the same name is based upon. The new season of The Walking Dead TV show debuts this coming Sunday night.

“We’re stoked to debut day-and-date single issues, as well as get our deep library of amazing trade collections back on the Kindle platform so that even more comics fans can discover some of the best creator-owned content out there,” said Jeremy Sullivan, Director of Digital Sales at Image Comics.”

“With titles like The Walking Dead, Saga, East of West, and more, Image Comics publishes some of the bestselling comics and graphic novels on our platform,” said Chip Mosher, comiXology’s VP of Communication & Marketing. “Image plays a central role in the diversification and expansion of comic book fandom, with so many great titles that create new fans across the world. Making Image Comics titles available through Amazon’s Kindle Store is a big win in our quest to make everyone on the planet a comics fan. We’re very happy today, not only to renew our relationship for comiXology readers, but to expand Image’s presence to the larger Amazon audience as well.”

Kindle readers will also have access to new Image Comics titles on the same release date as their print versions become available.

With over 75,000 comics, graphic novels and manga from more than 75 publishers, comiXology offers the widest selection of digital comics in the world. ComiXology’s immense catalog and cinematic Guided View reading experience make it the best digital platform for comic fans worldwide.

About comiXology
ComiXology, an Amazon.com, Inc. subsidiary (NASDAQ:AMZN), has revolutionized the comic book and graphic novel industry by delivering a cloud-based digital comics platform that makes discovering, buying and reading comics more fun than ever before. ComiXology’s Guided View reading technology transforms the comic book medium into an immersive and cinematic experience, helping comiXology become a top ten grossing iPad app in 2011 and 2012 and the top grossing non-game iPad app in 2012 and 2013. Offering the broadest library of comic book content from over 75 publishers – and independent creators as well – comiXology will not stop until everyone on the face of the planet has become a comic book fan. ComiXology is based in New York City, with operations in Seattle, Los Angeles and Paris. For more information visit www.comixology.com.