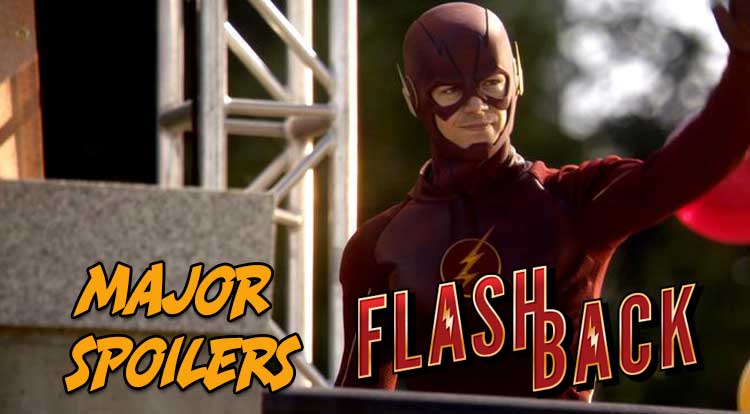 By Stephen Schleicher on October 7, 2015 3 Comments

The Flash is back!

The season opener of The CW’s The Flash has arrived, and once again we dip back into the little known and tidbits of information you may, or may not, have noticed.

If you haven’t watched this week’s episode, there are Major Spoilers ahead!

THE MAN WHO SAVED CENTRAL CITY

Still feeling responsible for Eddie’s death, Barry pushes his friends away and tries to protect the city on his own; Cisco assists Joe with the Meta Task Force.

How excited am I about this?

I’m over the Moon. I’ll dive more into the Jay Garrick history next week, when the hero moves front and center, but for now, remember The Flash was created by Gardner Fox and Harry Lampert in 1940.

Barry’s ennui over Flash Day, and the role he played in saving the Earth is all due to the loss of Ronnie Raymond, one half of the hero, Firestorm. In order to close the singularity, Firestorm split in the middle of the black hole, causing the rip in space and time to close. Dr. Martin Stein survived, but unfortunately, Ronnie Raymond made the ultimate sacrifice, and will never be heard from again.

Dr. Stein is sticking around though, and seems to integrate well with Team Flash, but what of Firestorm? Will the hero return? If only there was someone else who knew about the FIRESTORM project (he said sarcastically).  It’s a good thing Jason Rusch (played by Luc Roderique) appeared last season to give us a “logical” reason for others to step into the role. And, if you have been keeping track of the casting sheets, Franz Drameh has been hired to play Jay Jackson in DC’s Legends of Tomorrow, and is scheduled to appear in Flash season 2 episode 8. Interestingly, Jay Jackson has never appeared in the comics as Firestorm. While we wait for Jay Jacksonto appear, let’s pause as we remember Ronnie Raymond; he made the ultimate sacrifice, and will be missed. It’s been previously revealed that Cisco Ramon was affected by the particle accelerator explosion and has the power to see through many realities. This week, Cisco got a hint of how his powers work during Atom Smasher’s first attack. While it hasn’t been explained in show, those who follow the Flashback series regularly know that Geoff Johns created this incarnation of Vibe during the New 52 reboot way back in the long ago time of 2013. Albert Rothstein (a.k.a. Nuklon, Atom Smasher, and sometimes Atom-Smasher), first appeared in All-Star Squadron #25 in September, 1983. The character was created by Roy Thomas, Jerry Ordway, and Mike Machlan, though it was Dr. Martin Stein who gave him his name in this episode, because he absorbs atoms and he smashes things…

In the comics, Atom Smasher has the power to grow, and has super strength, both of which were on display this week. However, Atom Smasher was never a villain in the comics. The godson of the Golden Age Atom, Albert Rothstein acquired his metahuman abilities from his grandfather, the villain Cyclotron.  A charter member of Infinity, Inc., Atom Smasher later became a member of the Justice League – eventually joining the Justice Society of America, where he worked to uphold his godfather’s good name.

Atom Smasher did show is dark side in a story arc, that had him going on a Kobra killing spree, when his mother was killed. Later, he goes back in time to undo his mother’s death (shades of Barry?), but is still marked a murderer no matter what timeline he is in.

“But wait!” you scream. “Wasn’t Al Rothstein named as one of the people killed in the particle accelerator accident? They said his name in the “Power Outage” episode! Why the heck is he alive and well here?”

I’m glad you asked, Dear Reader! This isn’t the Al Rothstein of this Earth. At the end of the episode, as he dies from radiation poisoning (thanks, Barry), he tells Barry that Zoom promised to take him back to his world if he killed the Flash. We know Jay Garrick is from Earth-2, and that a multiverse does exist, so perhaps, this Atom Smasher is from Earth-3, home to the evil counterparts that form the Crime Society. Though Atom Smasher usually wears a mask, the mask popped on and off a couple of times this week, revealing Adam “Edge” Copeland as the Villain of the Week (VotW). Wrestling fans know that Edge won 31 championships in the WWE during his career. He is the first wrestler in history to have won the King of the Ring tournament in 2001, was the first Money in the Bank ladder match winner in 2005, and won the Royal Rumble Match in 2010. So, yeah, beating up the Flash seems like the next logical step in his career.

Barely mentioned in this episode is the season’s big bad, Zoom. We know little about the character at this point, but more will become clear as the season moves forward. With the Multiverse in play, this interation of Zoom could be anyone… or it is exactly who we think it is – Hunter Zolomon.

Created by Geoff Johns and Scott Kolins, Zoom is usually thought of as a Wally West villain, but since we don’t have Wally in this series (yet), he’ll do for a Barry Allen foil. Zoom first appeared in The Flash: Secret Files & Origins #3 in November 2001.

In the television series, Tony Todd (of Candyman fame), provides the voice for the homicidal bad guy. I find it very interesting that all of the Zoom graphics we’ve seen are blue. In the 1990’s series, a blue Flash appeared as the evil twin Pollux, and many comic fans associate the color with speedster John Fox – a speedster from the year 2645.  While it would be interesting to see John Fox appear in the show, it won’t be as Zoom. If I were to guess, this season will focus on the Multiverse, while most of next season will feature time travel.

The Law Firm of Weathersby and Stone

An envelope from the Law Firm of Weathersby and Stone makes an appearance in this episode. This is a nod to the ABC television series “Eli Stone” that ran for two seasons in 2008. Why would there be a nod to an ABC series on a CW show? Well, Eli Stone was created by Greg Berlanti (the producer of The Flash), featured Victor Garber (who plays Dr. Martin Stein), with the music composed by Blake Neely, who is also the composer for The Flash.

Flash fans petitioned the White House to make February 11th the official Flash Day in honor of the first appearance of the character in 1940. Sadly, only 735 fans of the 10,000 needed signed the petition. If the necessary signatures were acquired the White House would have made an official response, and we could be celebrating Flash Day every year. Vito D’Ambrosio returns as Mayor Anthony Bellows to give the Flash the key to the city. Before stepping up to play the mayor in season one, D’Ambrosio was Officer Tony Bellows in the 1990 Flash series on CBS.

Flash Light (get it?)

While trying to catch Atom Smasher’s attention, Flash uses a giant light to shine his logo on the clouds. Cisco mentions he thinks he got the idea from a comic book. We all know that the Flash Signal – or Flash Light (get it, get it?) – is a derivative of the Bat Signal, but it does make me wonder, “Are they saying we’ll never see Batman in this universe, or is Cisco using his Vibe powers to see what is going on in different DC universes?”

I don’t think it was named in the show, but the large radioactive barrels with the Hudson logo on it, makes me think we saw the Hudson Nuclear Power Plant in this episode.  We already know that Hudson University is the home of Firestorm (or at least Dr. Martin Stein). In the comics, the Hudson Nuclear Power Plant was designed to be the first completely safe atomic testing center.  Dr. Stein and high schooler, Ronnie Raymond were trapped in a radioactive blast set off by the nuclear activist group, the Coalition,which resulted in the origin of Firestorm. This happened in Firestorm #1 in March, 1978.

Why are there mirrors at Flash Day?

Channel 52 returns this season to report on the upcoming Flash Day activities. The first shot we see of the site location is someone setting up a booth with a bunch of mirrors hanging from it. Why are there mirrors?

Two police cars get banged up in this episode, and in each instance, the creators used shots that clearly show off the squad car numbers. I don’t know if 140 or 813 mean anything to you, but… Notice that the cover features Barry Allen fighting Captain Cold and Heat Wave – just like the opening dream sequence of this episode!

There is no Flash #813, but in August of 2013, Flash Volume 2 #23 was released that featured the Flash fighting Reverse-Flash for the life of Iris. There’s probably no connection of that issue to this episode… move along!

I totally want Cisco’s Flash shirt that he wears during the Flash Day ceremony.

I couldn’t find anything about Greg Turk in the DCU, but the actor who played him, Aaron Craven, did play a scientist in the TV series, Smallville.