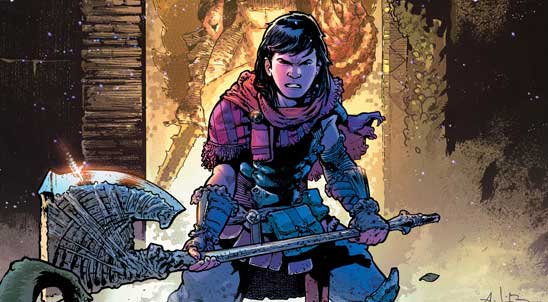 [Solicitations] Birthright #11 will be double-sized issue

Previously in BIRTHRIGHT, the Rhodes family discovered that the disappearance of their youngest son was not the most devastating event they’d be forced to weather. His sudden reappearance was no picnic, either. When “big” brother Brennan joined Mikey on the road, he found out that survival skills are at a premium even in our world.

In BIRTHRIGHT #11, readers get a glimpse at one of Mikey’s most pivotal moments: his confrontation with the Pale Rider.

“The first year of Birthright has been full of drama and adventure, but #11 kicks off year two with some big revelations. We finally get a glimpse into what lead Mikey to the dark side,” said Williamson. “Andrei and Adriano knocked this issue out of the park with some amazing art that is beautiful and inspiring. Can’t wait to share all the insane stuff we have planned for this next arc!” He added: “Also, two words…DRAGON. RIDERS.”