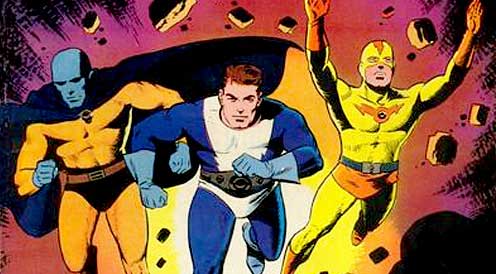 After 50 years of protecting the globe, The Higher United Nations Defense Enforcement Reserves (aka T.H.U.N.D.E.R.) Agents still stands as the first and only truly international comic book super hero group set up to work for the United Nations. Brought to life in 1965 by comic book legend Wally Wood, T.H.U.N.D.E.R. Agents has been blessed throughout its first half-century with some of the finest artists in the industry, including Steve Ditko, Gil Kane, Mike Sekowsky and Dave Cockrum. T.H.U.N.D.E.R. Agents’ message of global peace, teamwork and unity has even greater significance in today’s international climate.

The panel will spotlight the history of T.H.U.N.D.E.R. Agents, and some exciting special announcements regarding the ever-expanding future of the franchise. In addition, the panelists will unveil new details of the benevolent United Nations/UNICEF initiative, “Comics Uniting Nations,” a partnership with non-profit organization Reading With Pictures to develop comics that illustrate the Sustainable Development Goals of the United Nations, and includes IDW Publishing’s participation throughout the world.

About CEA Group:
Founded in 1973, CEA is a leading provider of investment banking services and private equity to the global communications, media, entertainment, and information technology industries. With a team of highly experienced personnel worldwide, CEA has an unequaled depth and breadth of industry knowledge, expertise and long-standing industry relationships. CEA has completed over 900 transactions totaling $45 billion in 60 countries. CEA and its affiliates also managed, co-managed or participated in a worldwide family of private equity funds with committed capital of approximately $1.15 billion for private equity investments in the industries CEA serves. CEA’s reputation and track record of success are built on delivering innovative, value-added solutions and services to clients worldwide. CEA Atlantic Advisors, LLC is a FINRA Registered Broker-Dealer and a member of SIPC.

About UNICEF:
As a global organization devoted to the survival and well-being of children, the United Nations Children’s Fund (UNICEF) is working to create a world in which no child is ever institutionalized, bought or sold, stolen from a family or otherwise victimized. Created in 1946, UNICEF believes that every child deserves to grow up in a loving family and supports inter-country adoption when conducted ethically in accordance with prevailing law and best practices. At the same time, UNICEF works to support families in need so that no one ever feels forced by poverty or insecurity to give up a child. To focus on only one of those things, and not the others, is not in the best interests of children. UNICEF has helped save more children’s lives than any other humanitarian organization.

About the United Nations Creative Community Outreach Initiative (CCOI):
As the public voice of the United Nations, the Department of Public Information (DPI) is dedicated to communicating the ideals and work of the United Nations to the world. The United Nations Creative Community Outreach Initiative (CCOI), an office of DPI, was launched in 2009 to collaborate with the entertainment industry in order to achieve mutual goals of promoting peace and raising awareness of critical global issues. CCOI believes that awareness is a powerful tool in the face of injustice because it inspires compassionate action. Through creative media, we can bring honor, empathy and compassion to our stories, and, ultimately, to the people who live them. http://outreach.un.org/ccoi/

About Huayi Brothers Media Corporation:
HUAYI BROTHERS MEDIA CORPORATION is one of China’s largest and most successful media and entertainment companies. Founded in 1994 by brothers Wang Zhongjun and Wang Zhonglei, the company began with feature film production and distribution, and has since then expanded into television production, talent management, cinema, music, new media, gaming, and theme parks. After being listed on the Shenzhen stock exchange, Huayi closed a major slate financing deal in 2014 with Robert Simonds’ STX Entertainment, highlighting the growing business between Hollywood and China.