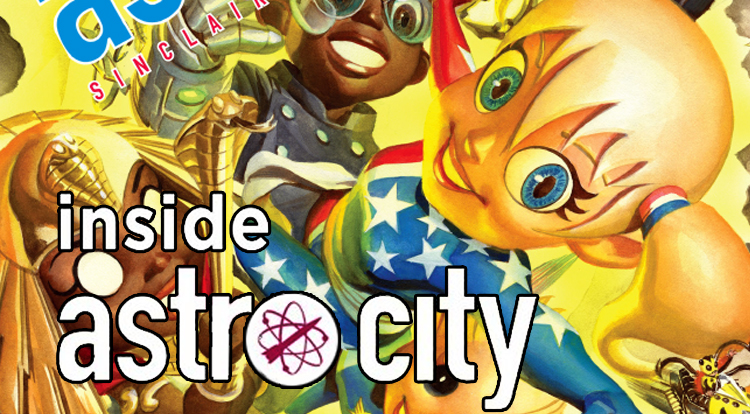 Inside Astro City #27 With Kurt Busiek

Welcome to Inside Astro City, a column focusing on the Vertigo Comics series Astro City from Kurt Busiek, Brent Anderson, and Alex Ross, this month featuring guest-artist Joe Infurnari!  Each month, we’ll take a look at the current issue of the series, and ask series writer Kurt Busiek questions about the book. This month, we spotlight one of the newest heroes of Astro City, the adorable and powerful American Chibi, with Inside Astro City #27!

Astro City #27: American Chibi has been a mystery since her debut-until now. Learn the secrets behind her origin, her powers and the deadly threat she stands against in an issue featuring the guest art of rising star Joe Infurnari (The Bunker, Jersey Gods). Plus, is this world-or any other-ready for…Chibi Honor Guard?! 1. This story feels like it’s been a long time coming, with its reveal of the truth behind American Chibi, one of the first new Astro City heroes of this volume.  Was there a conscious attempt to make her feel like a modern 21st century hero, e.g. her video game origins?

Kurt Busiek: Well, as a chibi-character in the first place, she’s obviously rooted in something more recent that the traditional roots of most superheroes. But I wasn’t so much thinking of “modern” so much as “fitting.” American Chibi came about because of a lunch I had with Scott and Ivy McCloud, where Scott drew a chibi version of himself of a napkin, which made me suddenly decide to have a chibi hero in ASTRO CITY, and the name “American Chibi” hit me there at lunch. Brent and Alex designed her beautifully, and she certainly felt new and different and modern.

But as to her origin, that was something I had to figure out — when inspiration hit, it delivered an idea, an attitude, a personality, but not an origin. So I had to let it stew for a while, and eventually figured out her whole background. Some of it’s modern, some of it goes back to Lovecraftian ideas of ancient powers that exist outside our reality but want a way in…it all mixes together.
Mainly I wanted a good story, something that’d have a lot of humanity and feel appropriate to a character who looks like a piece of anime… 2. This issue features two very distinct styles of art to differentiate the reality of Astro City from the world within Marguerite’s game.  How much of that did you specify, or was it all the work of guest-artist Joe Infurnari?

KB: When Joe agreed to do an ASTRO CITY issue, I was thrilled, because I’ve been a fan of his work since I saw pages from Ultra Lad online. I knew he could draw realistic, and I knew he could draw beautifully in a cartoon style, so knowing he was on board, that’s why I decided we’d make the issue about American Chibi. I designed the video-game world section with his cartoony style in mind, but I didn’t give him much direction on it, just that I wanted to take advantage of his versatility. So making the “real world” stuff as nuanced and sketchy as he did, in contract to the hard-edged cartoony gameworld was his own choice, and I think it worked beautifully.

It also inspired Alex Sinclair to take a very different approach to the color, as well, to work with Joe’s art rather than just do traditional color. I love it when that happens, when a new approach by one guy inspires a new approach by someone else in the team — no one’s content to rest on their laurels, they’re always trying to make the book better. And it really paid off. 3. Many of the Honor Guard members this issue are very long-serving members, including The Gentleman (another of my personal Astro City fave-raves.)  Any chance that we’ll be seeing more of him, perhaps something that might explain his decades-long career?

KB: Actually, the Gentleman’s only been a member of Honor Guard the last few years — he joined sometime in the gap in publication before the current series, along with Winged Victory. That’s a story we haven’t gotten to yet. So even though he’s been around since the 1940s, he’s a relatively new Honor Guardsman.

But yes, we’ll eventually learn a lot more about him. It’s just waiting for the right time in the schedule, along with a gazillion other stories.

4. This issue features a lot of time spent in the game world, with some characters who might be referential of real-world games, such as Sonic’s Dr. Robotnik, etc.  Are you a video game player yourself?

KB: I’m not, no. I don’t know who Dr. Robotnik is, and have only the vaguest of familiarity with Sonic (mainly because my old pal James Fry has drawn a lot of SONIC over the years). I wish I could say I was making all kinds of clever references, but really, the place we got most of the game characters from was me driving somewhere with Danny, my eldest, and saying, “Let’s make up some videogame villains!” Danny made suggestions and I turned them into ideas I liked, and then Joe made them look amazing.

But my videogame expertise basically runs from Pong to Mr. Do.

5. With Marguerite now able to channel the power of the magic hair scrunchies (kudos again for another ingenious bit of business, by the way.  I love that!) will she still be called American Chibi, or is a new name in the cards for her?

KB: She’s not a chibi, so no, she won’t have that name. It won’t be treated as a big surprise or anything, so I guess it won’t hurt to say here that she’ll be called American Star. Unless we come up with a better name before she turns up again! Bonus Question: Any hints on what to expect in #28?

KB: #28 is another guest-artist issue, this time featuring Gary Chaloner, a terrific Australian cartoonist I’ve worked with before, on an issue of POWER COMPANY, along with Wade von Grawbadger, who’s inked Stuart Immonen (and others) beautifully over the years.

And where we did the American Chibi story because Joe was up for doing an issue, in this case it was the reverse — I asked Gary to come aboard because I wanted to do a Wolfspider issue. Wolfspider’s our Australian Honor Guard member, and I knew that if I had Gary as a collaborator, I wouldn’t have to do all that research — Gary would be able to tell me where various scenes should take place, and he’d be able to backstop me on Aussie slang and make sure I didn’t look too stupid.

So it’s a story about Wolfspider and his origin and his favorite superhero cartoon from when he was a kid, and what happens when those heroes start showing up in Australia and fighting bad guys for real. It’s an action-oriented character-focused one-issue story, and we crammed a lot into it.

After than, Brent’s back for an unusual First Family story, but it’s been great to have some terrific guest artists helping us out on the schedule. I hope the readers like the results! Astro City #28: A look into the life of Wolfspider, the Australian Honor Guard member.  When Queenslaw, a cartoon super hero team from Wolfspider’s youth, suddenly turns up as real heroes, he has to deal with his origin, his childhood dreams, and deadly danger.  Guest art by Australian comics star Gary Chaloner (Jackaroo, Red Kelso, John Law).  Plus: a fistful of Australian super-villains, too!  It’s a whole theme thing!