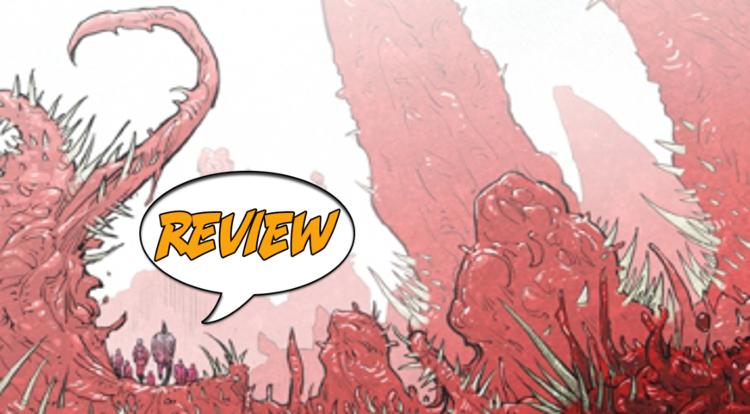 We’ve seen what life in the world of Spread can to do an adult, but so far little has been seen of children.  What will life be like for those who have grown up not knowing a world without the horrors that is the Spread?  Spread #10 has some insight into those questions and Major Spoilers has your review! Previously in Spread: After a giant cluster-shmozz at a previous camp, No has been badly injured.  While on their way to get him help, Molly and Jack (and baby) get ambushed by the Professor and his band of crazy, killer kids.  Now Jack has been sent to rescue three of the Professor’s children from slavers, but it seems Jack is friends with more people than we know.

From the beginning of the series Spread, I’ve loved the blending of genres that Justin Jordan has been doing.  There is very much a John Carpenter’s The Thing influence along with some other survival horror genre tropes.  No was/is the great silent hero who says little, and kicks a lot of butt.  The first arc focused very much on the horror aspect of the series, with the Spread monster around every turn and the characters always on the run.  This issue, as well as the last, has taken the book in somewhat of a different direction and it’s really great seeing Jordan use even more of his influences.  The Spread is only seen in the opening two pages and the final and while its presence can be felt, it is no longer the main focus of horror.  Jordan has instead decided to focus on the horrors that humans do to each other in situations like these, in this case specifically: child slave trading.  Readers sensitive to child endangerment might want to steer clear from this one, though I must say there are a few terrifying youngsters here too.  These are kids who have grown up in this world and it’s all they know, which makes them almost as scary as the Spread monster.  The book has gone from survival horror to more of a Mad Max post-apocalyptic style story.  I like the transition and it keeps a book that could easily get boring fresh.

At the end of issue nine, it seemed like Jack was a piece of human trash and while he still may be, this issue proves he is a man of his word and actually ends up helping the Professor and his kids.  It’s another thing I love and hate about Justin Jordan’s writing; I can never get a feel for just what moral side people are on.  Maybe that’s the point.  Is everyone just doing what they can to survive?  At what point do the ends justify the means?  Sure, they’re questions and themes that have been touched upon in other horror comics, but Jordan still brings enough new meat to the table that I’ve yet to be bored.

THE SQUISHY PARTS ARE BEST

Kyle Strahm’s art may be a bit of an acquired taste but I think he’s not only nailed the tone of the comic, but has improved in his storytelling since issue one.  I don’t know how much is attributed to John Lucas’s layouts but the book is better regardless.  The splash page of the Spread ripping a deer in half is gorgeous in its grotesquely detailed style and Jack eating is drawn so well I found him more disgusting than the Spread.  I never found Strahm’s action scenes to be his strong suit but they’ve improved and it’s easier to tell what is going on.  Some faces still resemble each other too closely, leading to confusion but it’s nothing earth shattering.  This issue doesn’t see much in the way of backgrounds unfortunately, since most of it takes place in the dark, but there are some cool lighting effects that help overcome the problem.  One thing Spread has done wonderfully since the beginning is the use of cool colors and muted tones, with the bright red of blood being the standout.  It’s a brilliant, subtle technique that makes those gory moments pop and when the Spread makes its presence known, it’s unmistakable.  I hope the team of Kyle Strahm, Felipe Sobreiro and John Lucas stick around because it’s a winning team.

BOTTOM LINE:  NOT TO BE OVERLOOKED

I feel like Spread may be getting overlooked by people because of some very slight similarities to Walking Dead, and being from the same publisher might not help either.  Let me tell you, Spread is a unique, scary and most importantly, fun comic.  It may deal with serious themes but I’m never depressed after reading it.  There is some terrifying and stunning artwork as well as coloring to go along with a story that is constantly evolving its style.  Just when I think I have the genre, characters or story of Spread figured out, Justin Jordan goes and turns things on their head.  I both love him and hate him for it.

Spread #10 continues with the evolving story and great artwork, but those sensitive to child endangerment, or with sensitive stomachs may want to steer clear.