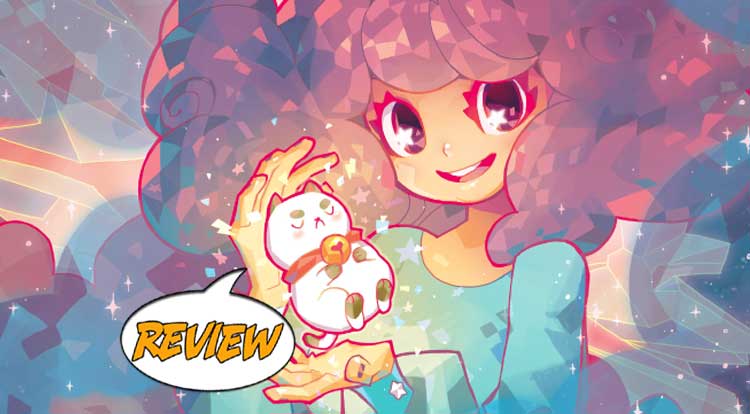 As the father of an eleven-year-old, I hear about all manner of shows, Youtubers and properties for which I have no context, so it’s nice when her interests and mine collide on the comics page.  Will Dad have any clue about Widget’s new favorite thing?  Your Major Spoilers review of Bee And Puppycat #9 awaits!

Previously in Bee And Puppycat: While on her way home from yet another job from which she was fired, Bee was suddenly struck by a bolt from the blue…  Well, less a bolt, and more a strange dog/cat creature she names Puppycat.  Suddenly given a new responsibility, Bee ends up with magical abilities and an ongoing mission (the one job she hasn’t been fired from), being sent out by an AI called TempBot to help people in need, all around the universe…

While I am one of the classic superhero-loving types, my love of comics outweighs questions of whether or not anybody has a cape on, so I was pleasantly surprised to find myself immediately drawn into this issue’s story.  Bee is unable to find her favorite scarf anywhere in her messy apartment, leaving her distracted and mopey, worrying that it might be gone forever.  In a very subtle, but super-cute moment, Puppycat suggests that she’ll do better finding it if she doesn’t focus entirely on it, instructs her to put on her shoes and teleports them away to TempBot’s realm for a job.  Once they arrive, our duo is dispatched to ‘Windmill Planet’, where the lone inhabitant wants them to help clean off her windmill.  But, the debris sticking to the blades isn’t just random trash, but “ambitions and dreams that hopeful hearts have given up on.”

That surprised me.  The rest of the story is a clever series of subtle jokes, as we see the strange manner of hopes and dreams left upon the wind (including blueprints for a robot, half-knitted sweaters and a device for cold storing hot dogs called “Weiner Freezer.”  Gathering all the lost hopes, Bee and Puppycat resolve to have TempBot mail them back to their owners, only to find one last hope unfulfilled…

It’s weird, with a plot this simple and evocative, to having something so key that you don’t want to spoil it, but this whole issue was a surprise for me.  The art is simply beautiful (and deceptively simple) with a water-color palette that makes it all feel like a dream a haiku once had.  (It apparently also sparks my own poetic influences, for which I’m sorry…)  The wrap-up is perfectly timed, and the overall effect of the issue was to leave me happy: Happy for Bee, happy about the thing I’m not explaining and generally content at the idea of a universe filled with talking alien dog-kitties and planets where everyone dresses like a pirate and hangs out at a metaphysical windmill.  It’s clear to me why this cartoon and the comic that it spawned have caught my child’s imagination, and I’m truly happy to find the story lacking in irony, referential humor or shouting (which probably says more about my expectations and mindset than it does about my daughter’s favorite media.)  In short, this was one lovely read, and one that makes me want to go and buy the first eight issues immediately…

THE BOTTOM LINE: GENTLE AND DREAM-LIKE

…and so, I did.  When a book has that catalytic an effect on a jaded ol’ nerd like myself, it’s clear that KaBOOM! has the rare and coveted ‘all-ages title’ that is truly for ALL ages.  Bee And Puppycat #9 reminded me of Dell’s old Disney comics or the Gold Key adaptations of my youth, and got a serious amount of storytelling done in a contained space, with A+ art that leaves us with a truly deserved 4.5 out of 5 stars overall.  I’m not longer worried about this being one of my kid’s favorite things, because it may end up being one of my own…

A quiet, almost poetic tale with truly wonderful art throughout...