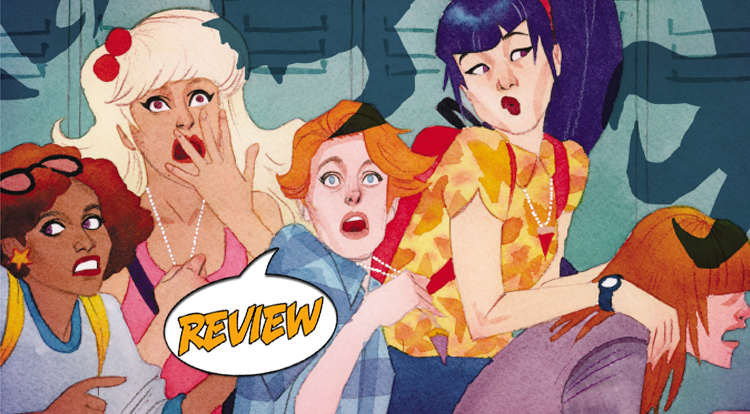 The magical girls of Zodiac Starforce have enough trouble on their hands, given team leader Gemini’s strange mystical affliction, but even their astrologically derived might isn’t ready for… Previously in Zodiac Starforce: “After a run-in with a mysterious shade monster, team leader Emma passed out during some drama with mean girl Diana.  The rest of the Zodiac Starforce brought Emma to the goddess of light, Astra, to see what was wrong, but Astra revealed that the only way to save Emma is by opening a portal to the evil Cimmeria’s realm, which they can’t risk for fear her darkness would spread across the globe.

MAGICKAL INTRIGUES, WITH A ‘K’

The magical girl tradition (which many American audience associate solely with ‘Sailor Moon’) is actually a much deeper tradition than it seems, and it’s rare to see an American comic book try to tap into that sort-kinda-genre, which is what made issue #1 of Zodiac Starforce so much fun to read.  This issue begins with an extended text messaging conversation between our heroes (Emma, Savi, Molly and Kim) which does double-duty in quickly showing us each Starforcer’s personality, and seemingly effortlessly introducing/reminding us of their names, something that I really appreciate in modern comics.  While Emma (Gemini) hides the extent which the magical infection has affected her, Savi (Pisces) is dealing with the utter terror of a Teenage Crush, while Molly (Aries) just wants to find someone to hit.  For her part, Kim (Taurus) is distracted by her big volleyball game, one which quickly turns into a magical emergency.  As someone who has done a lot of study on superhero costumes, I have to say that the battle-suits (and especial the henshin, which is just a fancy nerd-way of saying transformation sequence) are top-notch, especially the personalized touches like Kim’s rocker vest or Savi’s cap.  When the dust settles, Savi gets in a little time with her would-be love interest, Emma has a terrible nightare (which is undeniably creepy as heck), everyone becomes aware of Emma’s affliction and…

Still, as good as Panetta’s character work and pacing are here, the real star of the show is the art of Paulina Gaunucheau, soft-edged but clear and vital in every panel, with as much attention paid to clothing, furniture and scene-blocking as to cool superhero battles, another comic book best practice that seems rare nowadays.  Each character has a life of her own, and even their hairstyles add to their personality, allowing you to instantly identify who is whom even with the widest of wide-shots, while maintaining the power to horrify in Emma’s nightmare.  Indeed, one of the most powerful sequences in the book features Emma along in her slighty messy room, fearfully calling upon guardian-force Astra for help, an impressive feat in a book full of lovely art.  The microcosmos that is high school is also lovingly rendered, and well-defined, with mean girls, weird kids, dumb jocks and the occasional teacher trying to maintain order, balancing plot and exposition and making for a nuanced but entertaining read.

THE BOTTOM LINE: LOVE IT

Long story short?  Seek this book out.  It’s fun, funny, touching and exciting in turn, and the cast of characters is engaging as heck.  Zodiac Starforce #2 makes for a good read, and it’s soooo pretty, earning a very impressive 4.5 out of 5 stars overall.  With the implications of a Sagittarius in the wings, this has all the makings of my new favorite team book, which ranks as some high praise, indeed…

An interesting cast, a perplexing mystery and gorgeous art make this one a keeper...