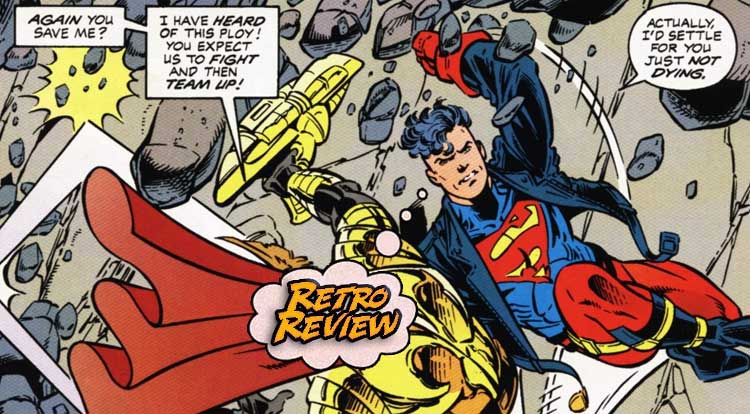 Your Major Spoilers (Retro) Review of Superboy And The Ravers #1 awaits!

Previously in Superboy And The Ravers: When the monster known as Doomsday broke free and began his march towards Metropolis, no one could know that it would mean a fundamental reshaping of the entire DCU (at least for a time.)  Doomsday’s rampage was only halted by the sacrifice of the world’s greatest hero, leading to multiple attempts to take up the legacy of Superman.  One was a monster, one an artificial being, one a working man, but the fourth was perhaps the strangest story of all.  In the labs of Project Cadmus, the Kryptonian’s DNA was mixed with that of a human (originally believed to be Cadmus administrator Dabney Donovan) and grown into a powerful teenage hero.  Though the original Big Red S did return, the clone did not give up his heroic career, grudgingly accepting the nom de guerre “Superboy” and becoming the premiere leather-jacket wearing hero of the age, teaming up with the Legion, the Titans and the JLA in short order.  Eventually, though, he would develop his own teen team, consisting of his metahuman peers.

This one’s for Otter Disaster. Enter the first peer, in the form of Sparx, a bubbly super-teen from a family of Canadian superheroes.  Growing up as the odd girl out in her family, she was empowered in the much-maligned “Bloodlines” crossover, gaining her electrical powers from a bite on the neck by an alien vampire-spider thing.  (It was the 90s.  Things were different then.)  As one of the most connected metahumans in Superboy’s rolodex, she has also invited the Metropolis Kid to a traveling metahuman rave called The Event Horizon.  Superboy is at first dismissive of her descriptions of “The Greatest Thing Ever”, but his protestations end when he encounters the rave proper… He’s never seen anything like it before!  I can’t say the same, as I’ve seen several issues featuring a cast of Paul Pelletier-drawn random super-dude melee, but this one is one of the best ones (thanks, I think, to inker Dan Davis.)  I’m not always a fan of Paul’s work, but his ‘S&TR’ pencils may be his best work, in my eyes.  Superboy is utterly flummoxed by the music, the lights, and especially the array of beautiful alien girls on display… “The word” is that a mysterious someone has created the endless party, filled with beautiful people (all possessed of superpowers) including a particularly handsy Khundian who puts the moves on Sparx.  Stepping in to defend his friend’s honor (while simultaneously refusing to listen to reason or back down from a stupid fight), Superboy finds himself manhandled by another alien.

This quickly proves to be a bad idea for all involved… Thrown back into a convenient waterfall, Superboy tries again to put the tactile telekinetic smackdown on his unknown foe, only to bump into a new arrival as he teleports into the Event Horizon.  Thrown for the second time, he finds himself in the company of a band of what seem to be cosmic zombies, led by a sexy vampire girl, but is puzzled about why they aren’t following through to intimidate him.  The answer is “Hero.” Before our new arrival can give Superboy the grand tour, the mysterious Bouncer returns, in the company of an ominous elfish-looking man.  The music stops, and everyone in the rave gawks at what they expect to be the sight of our young Superboy getting thrown out on his ear.  Superboy sneers that no one would understand him anyway, only to find that the man in the suit speaks perfect English, and even has a gift for him… Heh.  I love that bit.  Superboy once again starts to lose his cool before realizing that the “joy buzzer” jolt was actually Kindred Marx giving him a cosmic hand-stamp, allowing him permanent entrance to Event Horizon, wherever it travels in the universe.  Sparx and Hero congratulate their pal on earning the highest honor a teenager circa 1996 can achieve (or at least, their demeanors imply such) before another alien gets in our heroic clone’s face.  This one, however, has a different complaint: As a weaponer of Qward (which is not a misspelling, before you ask), he wants to take The Kid to task for wearing the legendary S-shield.  Before they can tussle, The Bouncer again returns to separate them, with his mysterious boss in tow… Superboy stalks off the dance-floor, promising not to use the home-turf advantage of the Hawaiian setting against Kaliber.  Turns out, he doesn’t have much choice, as they are teleported to an entirely new location… Their battle is as fierce as it is brief, interrupted by Kindred Marx realizing that they have attracted the wrong kind of attention, as in “galactic police force” kind of attention, and taking his ball (Y’know, in the “dance” sense?  Anybody?  Skip it…) and going home. Unfortunately for our young clone, he decides to leave Superboy and Kaliber behind, and the issue ends with them on the wrong end of a Darkstar disruptor weapon.  All in all, it proves a strong crossover, introducing quite a few characters and concepts (with the exception of S-Boy and Sparx, pretty much everyone else is new, and the multiple factions of the Event Horizon all reappear in coming issues.)  There’s a clear (if a tiny bit dated) premise in play, and the mystery behind Kindred Marx is established in a way that isn’t as annoying as many books of the same era, and Pelletier & Davis provide clear, detailed art throughout.  Superboy And The Ravers #1 may not be as well-remembered as other books, and the title’s run was sadly interrupted by multiple crossover madness plotlines that weakened the finished product, but it’s still a hidden bright spot of a comics era that gets a lot of disrespect, earning 3 out of 5 stars overall.  It may not be ‘Watchmen’, but it’s a likeable book…

SUPERBOY AND THE RAVERS #1

Well-plotted, clever, and unique, with some of Paul Pelletier's best art...