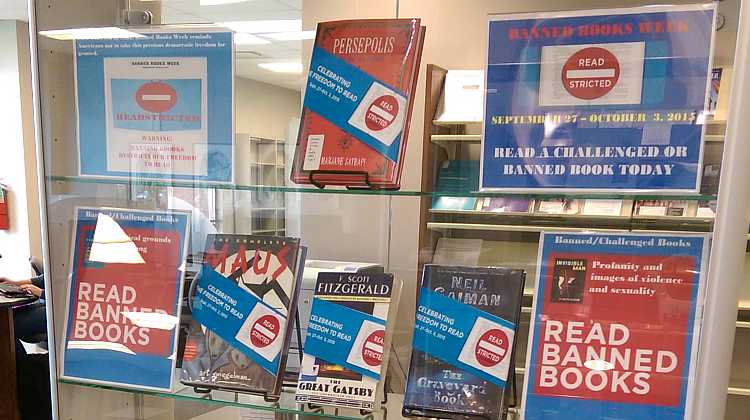 Banned Books Week: Why Comics Readers Should Care About Libraries

Most people think of their Local Comic Book Store as the place to go when they need a hit of sequential art, but public libraries are collecting a lot of GNs and trades these days. Here’s why you need to keep them in mind.

A few months ago, in the hometown of Major Spoilers Headquarters, the Hays Public Library dealt with what we book jockeys call a “challenge”. This is when a library patron asks to have something removed or reclassified within the library. This particular challenge came in the form of a letter to the editor of the Hays Daily News, in which a resident objected to the library putting up an LGBT Pride display in the teen area. As a librarian and former resident of Hays, I wrote a letter of my own in response.

This was uncommon in that the challenge was public. Typically, a library patron (usually a parent) will object directly to a librarian, so people tend not to be aware of how common challenges are. Public and school libraries deal with them all the time. To raise awareness of this situation, libraries across the U.S. observe Banned Book Week every year as summer is turning into fall. The American Library Association works with several other organizations, including the Comic Book Legal Defense Fund, to publicize the situation, and libraries (including the one where I work) will put up displays that often feature things like CAUTION tape and brown paper wrappings.

SO, WHAT DOES THIS HAVE TO DO WITH COMIC BOOKS?

Three of the top ten most challenged books of 2014 are comics: Persepolis by Marjane Satrapi, Saga by Brian Vaughan and Fiona Staples, and Drama by Raina Telgemeier. There was one on the previous year’s list (Jeff Smith’s Bone), but prior to that, going back to 1990, there were none. It’s premature to call that a trend, but it’s definitely worth noticing and paying attention to.

But there’s an even more complicated reason that you should pay attention: because some comics never make it to the shelves at all.

When I started working in libraries more than a decade ago, they were just beginning to add comics to their collections. Some were in the form of individual issues, but most were stand-alone graphic novels and graphic nonfiction like Maus. It took awhile for libraries to warm to the idea of superhero trades, because of the way libraries select materials.

One of the basic requirements of library purchasing is that books need to be reviewed. The more positive reviews a book has, and the more established the sources of those reviews, the more likely it is to be collected. This ensures that books are of good quality, but it also serves as documentation in the case of challenges like the one in Hays. The trouble is that the standard review sources weren’t looking at comics. In 2002, librarian and comics fan Robin Brenner established No Flying, No Tights specifically to fill that gap. Review magazines slowly increased their coverage of sequential art, but this took a long time, and because of this every library purchase was a gamble, and the stakes were much higher than for regular print books.

If a parent is objecting to a sex scene in a printed book, that means they have to have read it. Either they were reading the book themselves, or their child read it and told them about it. That takes a certain amount of time and attention. With comics, on the other hand, they just have to happen to be looking over a kid’s shoulder at the right moment, or flipping the book open when they are browsing the shelves. Because of this, the librarians who select materials are more likely to not buy a comic that might have questionable content, or to buy it and decide not to catalog it once they’ve seen what’s inside. I personally saw that happen with Alan Moore’s Promethea. The library system had copies of volumes 1 and 3-5 of the collected trades, but not volume 2, because that included a lengthy scene of the main character’s initiation into magic, accomplished through tantric sex.

This kind of self-censorship doesn’t happen because librarians are prudish. It happens because they are afraid of challenges and the bad press that can accompany them.

EYES ON THE PRIZE

This still might all seem irrelevant to the average comic reader who doesn’t use the library. But consider this:

According to ICv2, the top selling graphic novel in January of this year was The Death Of Wolverine. They quote sales figures of 8,450 for this $24.99 book. That figure reflects only sales in comic shops, not those delivered to bookstores or libraries.

Even if we assume that every copy Marvel sent to an LCBS was sold, that still puts libraries on par with comic book shops for sets of eyes on that particular trade paperback. And every library reader read the book for free.

I’m not going to tell you that libraries are the future of comics. But I will tell you that young people who have never been to a comic book store are exposed to comics in libraries every day. If you haven’t visited your local library recently, stop by. See what they have on the shelf. If they don’t have something you think they should, ask them to purchase it! Direct requests like that carry a lot of weight. If you have trades in good condition that you don’t want any more, consider donating them. And when someone asks you about out of print comics, don’t send them to a torrent site. Send them to the library!