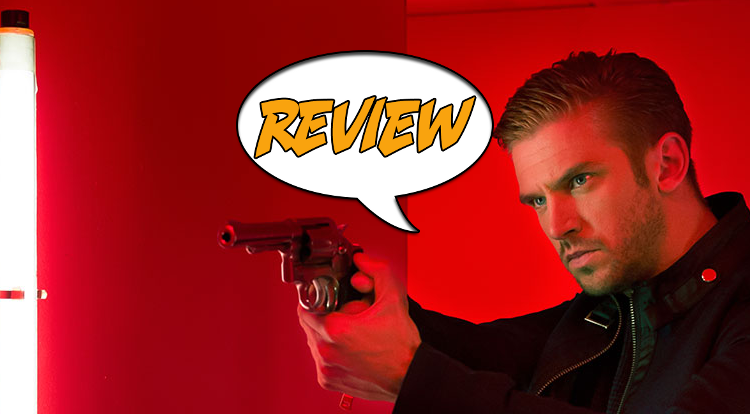 It’s October and that means it is once again time to turn out the lights, put on the popcorn and place your hands over your eyes, for Friday Night Frights are here again. This means all your Fridays from here to Halloween shall be spent slathered in horrors unimaginable. For this week’s entrée, we invite The Guest into our homes for a sure to be pleasant stay. You may recognize the names of Adam Wingard and Simon Barrett from last year’s second Friday Night Fright entry, You’re Next. And as this review follows that, so too did The Guest follow You’re Next, as Wingard and Barrett take another angle on the home invasion thriller flick (and somehow top themselves). What makes The Guest so satisfactory is hard to get into without spoiling a few plot points, and it is a film that works best if you go in relatively unspoiled. So if you want to see it fresh, get thee with haste to Netflix and rest assured you are in for a very fine film indeed. The rest of you, follow me.

The Guest, in a nutshell, posits the question “What if Captain America was actually entirely insane?” (with all that implies). In small town New Mexico, the Peterson family is dealing with the loss of their eldest son/brother during military action in the Middle East. A handsome, charming stranger appears on their doorstep, freshly discharged from the US Army, informing them that he served in Caleb Peterson’s unit, and furthermore was with him in his final moments. David (played by Downton Abbey’s Dan Stevens) is kind, helpful and respectful, and quickly ingratiates himself with Peterson family. He boosts the kids’ confidence in themselves, supports Mom and Dad by doing the dishes and everyone lives happily ever after. A few bullies end up with some broken faces, maybe a few bodies stack up around town, and David seems very concerned with plastic surgery and getting fingerprints removed, but dude’s really nice (and totally gorgeous – the reverse male gaze shots in this film are nuts). But then the military/industrial complex shows up in the form of Major Carver (the always wonderful Lance Reddick) and everything goes to hell.

With The Guest, Wingard and Barrett are consciously blending 80s greats like The Terminator, Halloween and The Stepfather, and coming up with an interesting concoction all its own. The film is bolstered by superb performances from Dan Stevens and Maika Monroe in particular. The former rapidly switches from magnetic charm to threatening menace like a switch is flipped, selling the strange nature of his character. Maika Monroe is a modern scream queen in the making, with a great turn in this and the excellent It Follows. To boot, the 80s references are amped up even further with a soundtrack featuring 80s goth luminaries like Love and Rockets, Clan of Xymox and Front 242, draping the entire thing in a gauzy, eye-linered atmosphere. The Guest also features arguably the best final villain line of all time, so scope that out.

BOTTOM LINE: INVITE THIS GUEST IN

Like a Swiss watch, The Guest is a finely-tuned meshing of moving parts, coming together in perfect synchronicity, and resulting in one of my favorite films of 2014.  Barrett’s script is quick, clever, and economical, somehow allowing viewers to both root for David at the same time as they are repelled by his actions. Wingard’s direction and editing highlight the humor while keeping the pacing brisk. As a horror film, it never gets entirely scary or horrifying. But The Guest is so fun you won’t notice. The Joe Bob counts for this one are as follows – thirteen bodies (give or take a dinerful), two broken bones, schnapps to the face, Pool Cue Fu, Boxcutter Fu, Yard Stick Fu, two headshots, one broken jaw, one dead scarecrow, one car crash, the line “Cash is easy to get,” and best/worst advice ever: “… go around their houses at night and burn them down with their families inside. What’s the worst they can do?” Check it out.