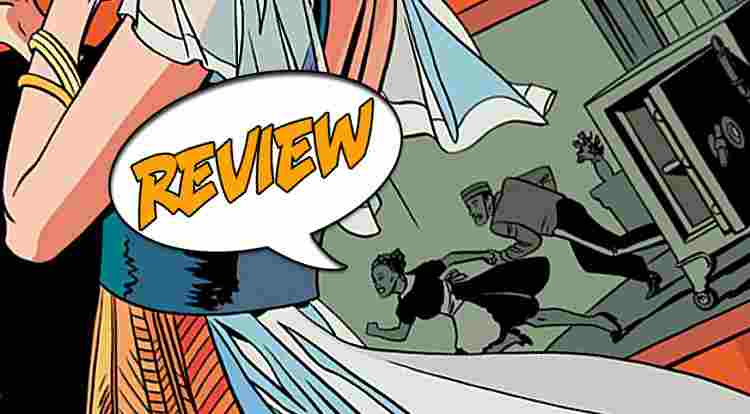 Everyone is struggling in the New York City of 1936. Well, almost everyone. After stunning socialite Nina checks into the Waldorf Astoria, Bellhop Frankie and maid Theresa decide they deserve a taste of the good life. Karl Siewert reviews original Dark Horse graphic novel The New Deal by Jonathan Case. Filled with historical detail and a bit of social commentary, The New Deal follows white Waldorf Astoria bellhop Frankie O’Malley and black maid and aspiring actress Theresa Harris. As you might expect, given the racism of the time, their friendship is tricky, moving from the edge of romance to shouting matches and back again. At the same time, the wealthy hotel guests affect their lives as well, particularly gambler and world traveler Jack Helmer and the stunning Nina Booth (featured on the book’s cover). A series of jewel thefts turns the story into a mystery, and Frankie and Theresa become involved. Will they catch the thief or become criminals themselves?

THE BIRD’S-EYE LOWDOWN ON THIS CAPER

We meet Frankie selling apples on the street with his Uncle Pack. From there he rushes to his job at the hotel where he is terrified to learn that Jack, to whom he owes money, is on his way to check in. Theresa is introduced when she finds Frankie in a guest’s room looking at an open jewelry box. The two have lunch together and he helps her run lines for her role in an all-Black production of Macbeth. Our third main character, Nina, appears with great flourish not long after, and Frankie is instantly smitten.

Theresa sours on Frankie after learning about his debt to Jack. When a guest’s jeweled dog collar is stolen, she is accused, and each thinks the other is the real thief. Frankie punches another bellhop for calling Theresa a racial slur, and they are called on the carpet, about to be fired, but Nina uses her influence with the manager to rescue them both.

Theresa discovers stolen jewels in one of the suites and goes to Frankie to make sense of it. Together they make a plan to profit from the goods, which eventually leads back to the hotel detective, Nina’s birdcage, idols Jack brought back from Tonga, and a delightful final chapter.

NOW FORWARD… INTO THE PAST

As a piece of historical fiction, The New Deal shines. The tale includes nods to real historical events, such as Orson Welles directing the “Voodoo Macbeth” as a WPA arts project. It also presents the era’s issues with race, sex, and class in a way that’s subtle, but doesn’t excuse them. The scene of Theresa’s interrogation is particularly good, as is a later encounter between Frankie and some of the Black actors she works with. I did note one anachronism, when Frankie talks to his apple-selling uncle about “marketing”.

HE WALKS AGAIN BY NIGHT

The New Deal rewards multiple readings, when we can see less obvious details in both the writing and the art. It wasn’t until my fourth time through, for example, that I realized Nina is probably fully dressed when Theresa finds her in the bathtub in Chapter 2, and there are intimations that Nina might be attracted to her that appear in later scenes. At key moments we hear Frankie singing “Puttin’ On The Ritz”, and it means something a little different each time. There are also a couple of nice bits of offhand dialogue between secondary characters that add depth and color without distracting from the main narrative.

UNCROSS THOSE BEAUTIFUL STEMS OF YOURS

Case, whose prior work includes Dear Creature and Batman ‘66, provides exceptional artwork here. The range of emotions his characters demonstrate is extraordinary, especially at moments of high drama like Frankie and Theresa’s fight about the jewels. The book is filled with wonderful images, from the art deco of the hotel interiors to Nina’s outfits to snowy street scenes. All is in meticulous black and white with painterly grey shading. I kept spotting small touches that made me smile, like a broken seam on Frankie’s jacket shoulder and the artfully folded end of a toilet paper roll during Nina’s big reveal.

A JOY TO READ

If you like a lighthearted historical caper with hidden depths, this book is for you.