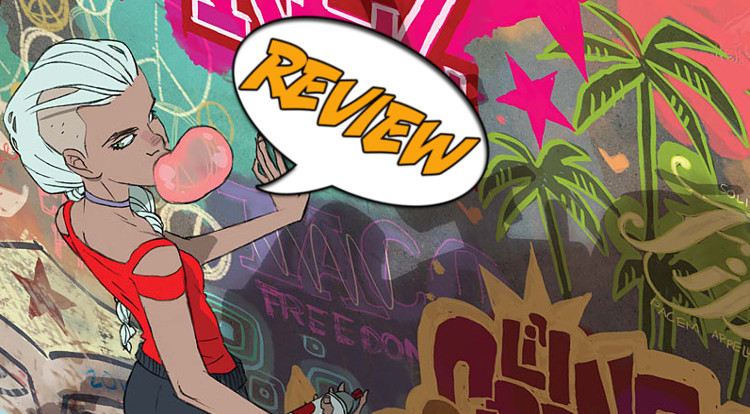 Beth has just been inaugurated as President of the United States of America and she’s only sixteen years old.  Now that she’s nearly finished assembling her cabinet and advisers, what could be in store next?  Laws, immigration, warfare?  All of the above?  It’s the best DC book you probably aren’t reading but should be and Major Spoilers has your review of Prez #4. Previously in Prez: Beth aka “Corndog Girl” begins to assemble her cabinet of advisers, utilizing the White House’s technology to spy on people in order to choose those who she feels will best fit the job.  Most of them have no background in politics, which makes them extra qualified.  As she’s being inaugurated an assassination attempt is made on her life but the hacker group Anonymous hacks into a security bot and kills the assassin.

BE STILL MY CYNICAL HEART

Prez is a book for the cynic.  Though it’s cynical, it has some heart and it is filled with humor.  This issue packs more of a serious punch, and a gut one at that, but it hits the same notes that the previous issues have while also progressing the story.  The opening scene is a perfect example of how Prez blends real life political issues and hot topics with the exaggerated and extremist thinking that almost too many real people have.  As a truck delivering goods from Mexico crosses the U.S. border, the U.S. governments Sentries gun down and slaughter a group of immigrants attempting to cross the border illegally.  As the door closes behind their dead bodies, “Welcome” with a big American flag is painted on it.  It’s a horrible scene but I couldn’t help myself from laughing at the almost on the nose commentary it made.  Things get even more serious from there, as a child playing soccer outside a U.S. embassy in Pakistan is killed by a Sentry drone, being mistaken for a bomber.  Of course, part of the problem is the drone operators are basically video game players in beanbag chairs and recliners eating snacks (that’s no exaggeration).  Beth certainly has a rough first day on the job.  The U.S. government being what they are end up arresting a Muslim man who filmed the incident with his robotic eye while waiting for the bus and stick him in Guantanamo Bay.  Depressed yet?

All of this is a bit of a downer and I must say that I found this issue to be much darker than any of the previous ones.  Still, maybe it’s the way Mark Russell writes or just my twisted sense of humor but I still found some of it funny, just because of how eerily close to real life it was, or could be.  Is the U.S. government killing a child by mistake funny?  Absolutely not, it’s awful.  Do I think they would cover it up along with thousands others?  Yes, most definitely.  Beth wanting to shut down the Sentry program and release the information about the killings is what makes her such a likeable character but it’s the one problem I’ve had since the beginning of Prez: Beth seems sidelined in her own book.  There is so much good stuff and so many great ideas that we haven’t spent that much time with Beth but I love the time we’ve gotten.  Each issue of Prez has many side stories that all relate but this issue reads a bit jumbled and there is too much switching scene to scene.  While I found the Night Justice movie trailer brilliant in its Batman/dark superhero jab, it could have been left out and there is clearly something being set up involving the pork bill that is touched on briefly.  I’m concerned that even though DC has confirmed that Prez will still be twelve issues, just two six issue mini-series (that’s not confusing is it?), that Russell is still getting as much stuff down on paper as he can to cover his bases.  I hope this makes it all the way to the end, it’s a wonderful book.

Artist Dominike “Domo” Stanton, who I would call Domo if I knew him personally, has a style very similar to Ben Caldwell who has illustrated the previous three issues.  Tonally the two are almost identical but Mr. Stanton’s style is not as loose as Mr. Caldwell’s.  Stanton’s biggest strength is the action, and there is a surprising amount of it in this issue.  The robot sentry War Beast letting loose on the Guantanamo prisoners and other parts with sentries devastating surroundings have wonderful, dynamic angles and looks to them.  Characters facial expressions are great and downright hilarious sometimes but I find proportions are incorrect at times.  There are a couple of times where Beth’s head looks too large and other characters have arms that look too short.  Panel layout is fairly standard but there is always enough space where there needs to be and the big scenes feel as large as they should.  While I didn’t enjoy Mr. Stanton’s work as much as Mr. Caldwell’s, he’s more than a suitable replacement.

BOTTOM LINE:  THE DC BOOK YOU SHOULD BE READING

I will continue to shout the praises of this book until the day I die, or until it stops being good but I must reiterate:  Prez is one of DC’s BEST books out right now.  It’s filled with a poignant sense of humor that’s a little more truthful than we may care to admit.  Sure, it’s cynical and can be a bit depressing but there is enough going on and being said, and done in a humorous enough way, that the book is a winner.  Prez #4 is a bit more of a downer as it touches on more serious subject matter but manages to inject some lively playfulness into the issue that it isn’t depressing.  I’m deathly worried this book is going to get cancelled before its end, no matter what DC may say.  I don’t know how it’s selling elsewhere but our store no longer carries any copies for the racks, just club members only.  So I beg you dear Spoilerites, go out and buy Prez!  It’s the DC book you should be reading.  Otherwise, don’t complain that DC doesn’t try anything new and enjoy the next Batman title.

Until then: It’s over Prime!

While this issue is a bit more somber than previous, it still has enough bite and wit to be entertaining and sets up some intriguing plot events.