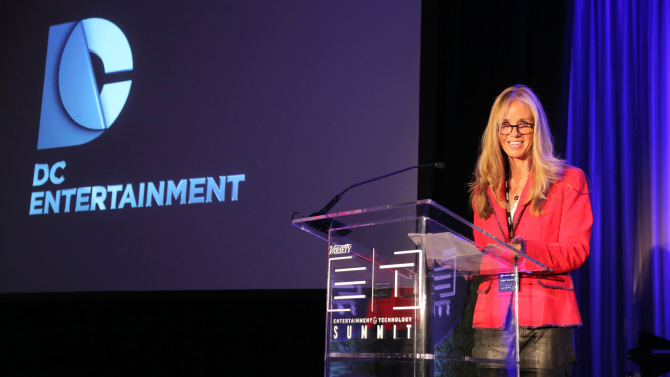 During her presentation at the Entertainment and Technology Summit, DC Entertainment’s Diane Nelson told the audience not to hold its breath waiting for a superhero television/movie crossover.

Nelson, who currently holds the title of president of DC Entertainment and WB Consumer Products and president-chief content officer of Warner Bros. Interactive Entertainment, was at the event to talk about the upcoming Batman vs. Superman movie, and the other ten DC branded movies arriving in theaters over the next five years.  Even though fans, including your humble writer, have hoped that we would see the film universe and television universe crossover, Nelson told audiences that they didn’t want to stifle creativity.

“We’re so talent driven,” Nelson said during the Q&A with Variety co-editor-in-chief Andrew Wallenstein. The focus on a single universe of characters with connected storylines “could end up handcuffing our creators into trying to work with the same storyline or force them to hold back characters or introduce certain characters. Ultimately it hinders the ability for someone like (showrunner) Bruno Heller to come in and create ‘Gotham.’ “

Nelson went on to tell Variety that the single universe approach works at Marvel, but doesn’t make sense for Warner Bros. There is a logic to the WB corporate thinking – a greater variety of storylines and products gives audiences a chance to find what works for them, rather than being forced into a constrained view. Honestly, I’m glad it works on the big screen for Marvel, but I rather like the CW version of the Flash, and Tom Welling’s Superboy over characters and stories we’ve seen on the big screen.

But how long can it last? Steve Spielberg claimed the superhero genre cycle was nearly up and in five years, WB could be in a tight spot with its movies, television, and direct to video features.

“We do believe we’re in a period time where comics and superheroes are really the driving force within pop culture,” Nelson said. “We have to be really sensitive to making sure were not creating any stories that don’t feel like they’re ready to be told… We have to make sure we’re getting the right story and the right content from the talent we work with. Ultimately we think if it’s a great story people will go out to see it.”

With Nelson’s increased responsibilities and greater control over what is being done with the DC properties, I hope she is able to keep that statement in mind going forward and doesn’t switch to a “push it out because we need monies” mentality.

While her presentation was focused mostly on movies and television, Nelson did address the print side of the company, praising Jim Lee and Dan Didio for rejuvenating the comics. She also mentioned that MAD Magazine continues to struggle in the online world, and that the magazine needs more work.