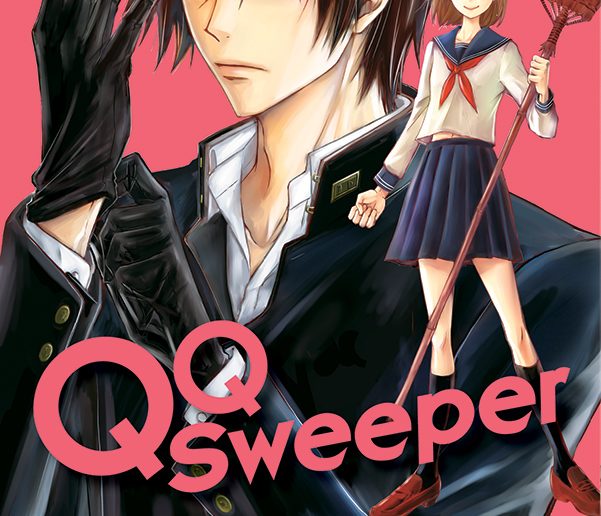 The new series by Kyousuke Motomi, creator of the bestselling and witty romantic comedy DENGEKI DAISY, will be published under the Shojo Beat imprint, is rated ‘T’ for Teens, and will carry a print MSRP of $9.99 U.S. / $12.99 CAN. QQ SWEEPER also launches digitally on October 6th via VIZManga.com and the VIZ Manga App, as well as from the Nook, Kobo, Kindle, iBooks, comiXology, and GooglePlay stores. Subsequent volumes of the continuing series will be published in English twice a year.

In the series, Kyutaro Horikita, the tall, dark and handsome cleaning expert of Kurokado High, meets a sleeping maiden at the school: transfer student Fumi Nishioka! Kyutaro teaches Fumi how to rid the school of nasty spirits, and unexpectedly how to cleanse her own heart! Fumi’s a natural at the supernatural, but the true secret behind her cleaning genius is muddy…

In the opening volume, in the old building at their school, a mysterious room has a door that beckons Fumi, even though she shouldn’t be able to see it. Kyutaro goes in after her, but will he be able to save her before she’s devoured by otherworldly creatures?

“Kyutaro is an expert cleaner, both in the physical world sense and in the spiritual sense,” says Amy Yu, Editor. “As Fumi adjusts to her new life at her new high school and as Kyutaro’s apprentice, the stage is set for paranormal adventure and a dose of romantic comedy.”

Manga creator Kyousuke Motomi debuted with Hetakuso Kyupiddo (No Good Cupid), which ran in the Japanese shojo manga magazine, Deluxe Betsucomi, in 2002. She also is the creator of Otokomae! Biizu Kurabu (Handsome! Beads Club) and her series DENGEKI DAISY and BEAST MASTER are both available in North America from VIZ Media.