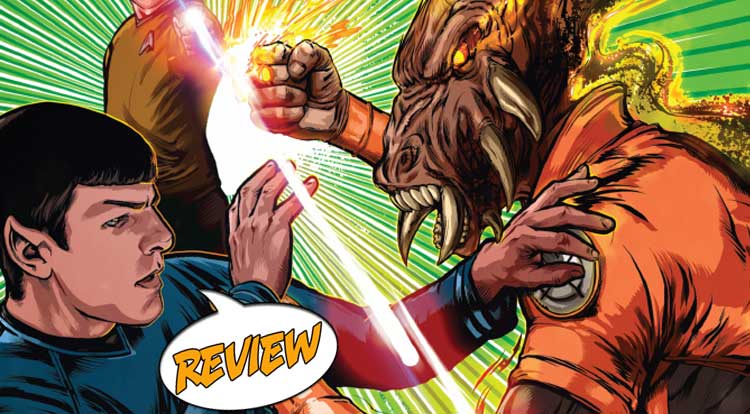 A last-ditch effort for survival has plunged Hal Jordan into an alternate universe, one where he has found the body of Guardian Ganthet in strange hands: aboard the United Federation Starship Enterprise!  Your Major Spoilers review of Star Trek/Green Lantern #3 awaits!

Previously in Star Trek/Green Lantern: “On a remote dead world, the crew of the Enterprise discovers the skeleton of a visitor from another universe, Ganthet, last of the Guardians of Oa, and six inert power rings.  Lt. Montgomery Scott activates the rings inside a tachyon field, causing the rings to escape and choose new bearers… just as the Enterprise is confronted by Klingon General Chang aboard a Bird-Of-Prey.  At this critical moment, Green Lantern Hal Jordan arrives to find out why Ganthet’s skeleton is onboard a ship he’s never seen before, in a universe he doesn’t recognize…”

We open with Green Lantern and Captain Kirk surveying the corpse of Ganthet, with an explanation of how the traversing of universes was achieved, with Ganthet dragging himself and the usual suspects (Saint Walker, Carl Ferris, Atrocitus, Sinestro and Larfleeze) out of their dying universe as Nekron successfully took over the entire universe, and presumably ended it.  With several members of the Enterprise crew now bearing Lantern rings (Chekhov with blue, Uhura with violet) and familiar faces throughout the galaxy gaining their own rings (The Gorn with a red ring of rage, General Change from Star Trek VI with a yellow ring of fear), it looks at though things are going to be equally is bad for the Federation’s version of the universe.  When Carol/Star Sapphire arrives carrying a wounded Saint Walker, she has the worst news of all: Nekron has followed them through the portal.  As the issue ends, we find said Nekron’s influence…

…in the former orbit of the destroyed planet Vulcan.  This could be very bad.

The issue is full of bits and pieces of likable lore (Commodore Decker and the USS Constellation appear, and the Romulan who gains the orange power ring refers to the ‘Balance Of Power’ in the galaxy), but it never really feels like a Star Trek tale (thanks to Chekhov zooming through space under his own power) or a Green Lantern tale (thanks to the heavy dose of Star Trek-style politics and the bulk of the issue taking place on a starship), leaving us with a quandary.  Worst of all, there is a prolonged sparring match between Kirk and Green Lantern wherein Hal insists that his rank of Air Force Captain is the same as Kirk’s, while countermanding Kirk’s own orders to his crewmen.  It’s an awkward moment, and one that feels unnecessary, as it paints Hal as a jerk who’s more interested in his own personal status than in the matter at hand.  The art is acceptable, but once again the mixing of genres doesn’t quite do the worlds in play justice, as the Enterprise crew are all given superheroish physiques, while Green Lantern and Star Sapphire’s masks never look quite right.  The issue does end with a very intriguing moment, I’ll give it that…

THE BOTTOM LINE: NOT BAD, BUT NOT QUITE THERE

In short, the hard balancing work of a crossover fiction is even harder when the SFQ (Science Fiction Quotient) of the worlds isn’t the same, leading this book to swerve back and forth between a Green Lantern tone and a Trek tone, with not quite enough plot-derived rubber cement to keep the seams from showing.  In short, Star Trek/Green Lantern #3 shows that the creators have done their homework on both universes, but falls short of making the crossover feel either natural or unprecedented, leaving the reader’s experience a disjointed one, even with the continuity nods, earning a better-than-average 2.5 out of 5 stars overall.

Not quite successful at replicating the tone of either franchise, but full of continuity nods...