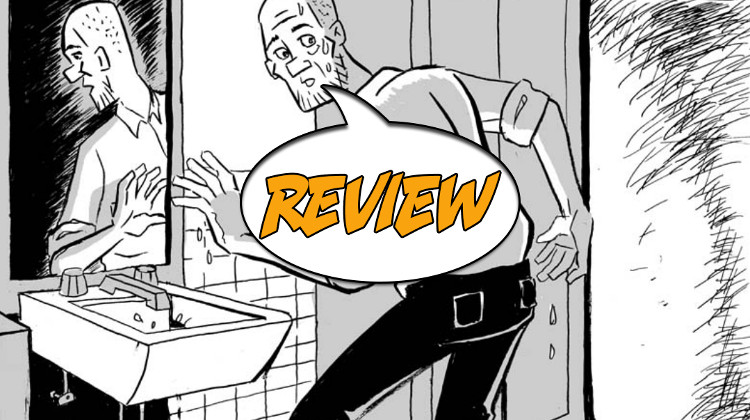 All My Ghosts GN Review

Joe Hale never wanted to be a journalist, and now he has to decide if he should keep the family newspaper or sell it. Karl Siewert reviews Alterna Comics’ original graphic All My Ghosts by Jeremy Massie. All My Ghosts is a (mostly) realistic contemporary graphic novel featuring Joe Hale, owner and editor-in-chief of a small-town newspaper in Appalachia. It tells the story of his mid-life crisis and some of its consequences. Alterna Comics suggests it for young adults 15+, but I don’t see it appealing to teens at all. It includes some salty language, brief nudity, drug use, and sex. The 105-page book is written and drawn by Jeremy Massie.

HE WASN’T EVEN SUPPOSED TO BE HERE.

Joe Hale never wanted to be a journalist, but he ended up in the family business anyway. Now that new media is killing newspapers, he’s decided to sell the paper and move on. At first, he agonizes over the decision, but when his daughter takes it better than expected (turns out SHE didn’t want to take over the paper, either) and he finalizes the sale, he seems resigned. He tries to take his old friend and managing editor, Billy, for a night out in a neighboring town to break the news, but ends up in a one-night stand with a bass player.

Her “f**k it” philosophy leads him to take some chances in his own life, starting with writing a few columns that offend a potential advertiser (definitely not called Wal-Mart), the coal company that employs much of the town, and even the local police. Joe spirals downward into drinking and risky behavior until the day he breaks the news of the sale to his staff, quits, and drives out of town.

Joe is figuratively haunted by the ghost of his father’s expectations. Whether he is literally haunted is open to interpretation. There are several incidents that could be supernatural phenomena, but could just as easily be explained away. That ambiguity adds depth to the story and also provides a few lighter moments that help to break up a tale that could be a lot more depressing.

WHAT’S HE ALL ABOUT?

Massie does a particularly good job of showing us Joe’s character through his relationships. We see his compassion for his daughter, a rapprochement with his estranged older brother, and reconciliation with an ex-wife. However, he treats Billy poorly throughout, culminating in a big confrontation at the story’s end.

The art is brushed blacks on white with grey washes to add depth. In flashback scenes with Joe’s father, the backgrounds are grey and shading is done with half-tone dots, a nice touch. Most of the square pages are multi-panel, but full-page panels with more detail appear at key moments, and there’s one two-page spread. Characters are clearly differentiated, and there’s some ethnic diversity, which is good to see. The lettering could be clearer. Backgrounds are rendered well, especially buildings and machinery.

This is a true-to-life story well told and well presented. The ending might seem abrupt, but everything hangs together, and the lack of resolution makes the story more poignant.


All My Ghosts GN

This is a true-to-life story well told and well presented.