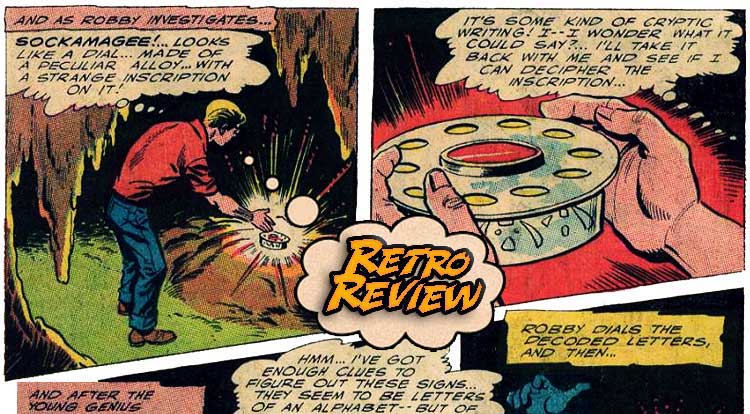 What would you do if immense cosmic power was at the tip of your fingertips?

If you ask me, Robby Reed has the right idea…  Your Major Spoilers (Retro) Review of House Of Mystery #156 awaits! Previously in House Of Mystery: Debuting as a mystery anthology waaaay back in the darn-near prehistoric year 1951, ‘House Of Mystery’ is a clear attempt by DC Comics to capture some of EC’s heavy ‘Tales From The Crypt’ audience.  With superheroes on the wane, the book did well, but the advent of the Comics Code Authority in 1954 left heavy restrictions on comic book horror fiction, leading to more science fictiony and weird suspense stories appearing.  Still, the superhero sundown didn’t last for long, and by 1964, ‘House Of Mystery’ was home to the monthly adventures of the Martian Manhunter, whose science fiction/super-duper adventures weren’t particularly in keeping with the ‘Mystery’ part of the title.  Of course, things could get even less theme-appropriate with the introduction of one Robert Reed (not THAT Robert Reed), known to his friends as ‘Robby’, teenage denizen of the rustic hamlet of Littleville, Colorado… Rustic or not, Littleville still exists in the DC Universe, which means that it’s the home of a massive criminal organization known as ‘Thunderbolt”, whose scientific resources are such that they can send giant teakettle robits against the local chemical plant.  All-American boy Robby is naturally incensed by this brazen display, but lacks the power to DO anything about their criminal enterprises… Again, DC Universe physics apply, meaning that the forty-foot fall left him only dazed, and Robby quickly begins trying to climb his way out, only to see a strange glow in a nearby cavern.  Investigating, he finds a strange alien-looking device, covered with strange symbols and an enticing glowing dial. Rather than leap into rash action, Robby sets about trying to decade the glyphs that cover the dial… There are a lot of unheralded artists in comics history, and I’m probably a casual fan of a large number of them, but Jim Mooney is a personal favorite.  Starting out in funny-animal comics in the Golden Age, he eventually became the signature artist on Supergirl starting in 1959.  Especially for the time period, his facial expressions are first-rate (witness Robby’s mix of fear and shock in that last panel) and he manages to make the heroes of Dial H look like Robby Reed while also feeling right at home alongside the likes of Superman.  Suddenly transformed, Robby realizes that he has super-powers, and takes off into the air!  Mid-flight, he encounters an emergency, a plane about to crash-land at Littleville airport… Giantboy wades into the robot (the same one that caused Robby to find the dial in the first place, which may be irony, but Alanis Morissette has muddied those waters for me) and takes it down in moments with his new might.  Giantboy then promises the owners of the Chemical Plant that he’ll be there to save them again, if necessary, before rushing home in order not to be late for supper… Thus, the shocking (in 1964, at least) truth about the H-dial becomes clear: Robby isn’t the new superhero Giantboy, he’s actually a whole cadre of heroes with varying powers, such as Cometeer’s flight and heat-manipulation abilities… The Thunderbolt goons, prepared for Giantboy, are thrown by the appearance of The Cometeer, and fooled by Robby’s superior tactical senses.  (Well, would YOU expect a superhero to disappear and turn into a teenage boy?  I mean, if you grew up anywhere other than Fawcett City?)  As the mooks escape, Robby quickly dials once more, prepared to trail them back to their lair as another new hero! Say what you will about Silver Age design, but the drill-for-a-head, drills for fingers, mole-whiskered mask look really works here.  Mooney’s design sense is what made this version of the Dial H For Hero property work where others have had lesser success, as no matter how outré the idea behind the hero is, their designs are solid, and their powers are visually cool.  Robby’s underground antics even reveal that Mr. Armour himself is behind the attacks, in an attempt to throw off suspicion when the criminals attack his competitor, leading to high-octane Mole action!  GO MOLE-TRON FORCE! The man behind Thunderbolt escapes to fight another day, but his iron grip on Littleville is loosened, and will eventually be broken by the likes of The Human Bullet, The Squid, Radar-Sonar Man and more, thanks to Robby’s new part-time job as protector of the tri-state area.  Others would pick up various H-dials in the fifty years since, but it was Robby who set the stage.  Interestingly, later iterations of the Dial H property would embrace crowd-sourcing, showcasing heroes and villains created by the readers, with future professionals like Stephen DeStefano contributing work, but no matter what changes they make, it seems that Robby always returns, as seen in a not-so-long-ago issue of Teen Titans Go!

Also, circa 1966, The Martian Manhunter went mostly just by “Manhunter”, and was portrayed by a green Yul Brynner… It is… a PUZZLEMENT.  (That art is by Bernard Baily, by the way, the man who created The Spectre and Hourman back in the Golden Age, The backup tale here is relatively formulaic, showcasing how J’onn’s primary powers, even this early in his history, was the ability to do pretty much ANYTHING, while his boots defy physics.  So, that’s something…  In any case, this issue sets in motion one of the cleverest and most unusual premises in comic history, leaving House Of Mystery #156 as more than the sum of its parts, thanks mostly to Mooney’s rendering, earning 3.5 out of 5 stars overall.

The first appearance of Robby Reed and the H-dial shows why the premise has stuck around, and features lovely art...