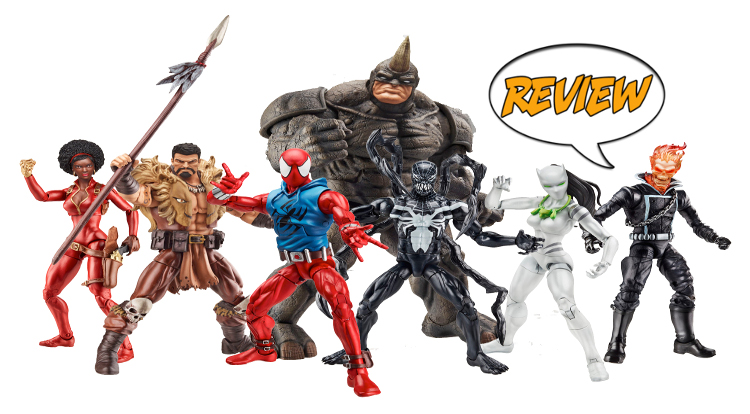 It’s that time again where I sit down, play with some toys and let you know what I think.  This review we’ll be checking out Scarlet Spider, Kraven, Misty Knight and Ghost Rider from the newest Marvel Legends wave of Spider-Man figures.  Marvel Legends?  It feels like I just did this.  Any excuse to play with toys is good for me, so let’s get to it!

For each figure I’ll be reviewing quality, articulation, paint application, accessories and overall fun factor of the toy.  Granted, some will vary for each person’s individual toy but this should give you an all around idea of the line.

SCARLET SPIDER:  It wouldn’t be a Spider-Man wave without Spider-Man and Hasbro gives us Scarlet Spider with wave 2.  As with the previous Spidey toys, this guy has awesome articulation and can get some cool and classic poses.  The double jointed knees do wonders with a character like this and allow for a complete bend of the leg.  Scarlet Spider looks great but I would have preferred to see his hood up just for a bit more variety.  The paint on mine is spotty in a few areas, with the plastic showing through but the eyes are nice and even with solid, straight lines.  What I find the most interesting about the Scarlet Spider toy is that his belt and two ankle pouches (whatever they may be for) are separate pieces.  I like the maneuverability of it but it continues to leave me stumped as to why Hasbro chooses to mold things the way they do.  Scarlet Spider comes with numerous hands to swap out, the same as Amazing Spider-Man from wave 1 minus the pizza, to add even options.  All around a really fun and great toy.

KRAVEN:  A great villain to have for a Spider-Man line and this Kraven figure is a blast.  He’s bulky but still manages to have good articulation.  He’s got shin swivel, though it is more mid-shin level as opposed to just below the knee.  The rest of the joints are standard for Marvel Legends figures.  The sculpting on this guy is exceptional.  Skulls on his knees, a lion’s head jacket, his belt and he even has a separate sculpted necklace as well as his spear!  There are drawbacks to the numerous pieces though, the main one being that his legs can only lift so far before his belt comes undone and falls off.  The hip joints on my figure are awfully loose and combined with his large upper body and jacket weight, posing can become a burden.  I can’t find any problems with paint and he is a visually striking toy.  While Kraven has never been a character that appealed to me, there’s no denying this is a fantastic toy.

MISTY KNIGHT:  Clearly someone, somewhere likes me because within two waves I’ve gotten three Fearless Defenders characters.  Three!  While Valkyrie and Thundra were great figures, Misty Knight has some problems.  Articulation is OK, but she is lacking some points which limit her poses, especially with her body sculpt.  She has no shin swivel and I have problems getting her to stand because of her thin legs, very similar to the problems I had with Ultimate Spider-Woman.  Wide stances are almost impossible.  Misty’s upper torso has decent side to side movement but extremely limited back to front.  Head movement is limited as well, with side to side being very good but up and down almost non-existent.  Misty Knight comes with a gun packed in her holster.  Disappointingly, the plastic on mine warped and the barrel lifts up slightly.  Paint is done pretty well but I’m again plagued with a toy with a lazy eye.  On the positive side, it’s a fantastic representation and I love the look of her robotic fist.  Plus, I’ve got a Misty Knight toy to go with my Iron Fist!

GHOST RIDER:  My favorite of the wave, this guy is downright awesome.  All his articulation works and isn’t limited in any way that I’ve been able to find.  I flipped out when I started moving his head around and found that his jaw opened and closed, which allows for some terrific looks.  Speaking of his head, it’s a really cool translucent orange/yellow plastic but the skull area manages to still maintain a white color.  I don’t know how it’s done but it’s impressive.  Another nice detail is the sculpted flame pieces around the neck that really help sell the idea that this guy is on fire.  The sculpting is really well done and the Johnny Blaze costume looks perfect and rugged, plus there doesn’t appear to be any paint problems on mine (granted, there are little colors being used).  The drawback is that he doesn’t come with any accessories.  There is a chain wrapped around him but it can’t come off and be used as a weapon.  I don’t understand why Hasbro chooses to do this with some figures, as it wouldn’t have been hard to give Ghost Rider a chain of some sort, maybe one that uses Thundra’s weapon’s mold?  It also can’t go without noting that Ghost Rider isn’t really Ghost Rider without his bike and I would gladly shell out extra money if they had released one with this wave.  I guess I’ll have to put him on one of my Wreck-Gar’s.  An all around brilliant and fun toy.

Overall, three of these four figures are really great with Misty Knight being the disappointment.  It was a let down because I was extremely excited to be getting a Misty Knight toy, and am still happy I have one, it’s just some aspects of the toy are not great.  Some of it may be limited to my specific figure but not enough to ignore.  To make up for it, I got an amazing Ghost Rider toy that caught me off guard and blew me away.  While there isn’t one of the four I’d say not to buy, if you had to, Ghost Rider and Kraven would be the top choices based on quality alone.  I’ve been pretty pleased with the recent Legends figures, mainly for character selection, and it continues with this wave.  Keep your eyes peeled because I’ll soon have part 2 of my review up soon.

As always, feel free to leave comments below and let me know if you liked/disliked this article, thoughts on the wave, ideas for other toy reviews or general musings on life.  Until then:  Transform and roll out!

Three of the four figures are really great and while I appreciate and love that there is a Misty Knight toy, she deserves better.