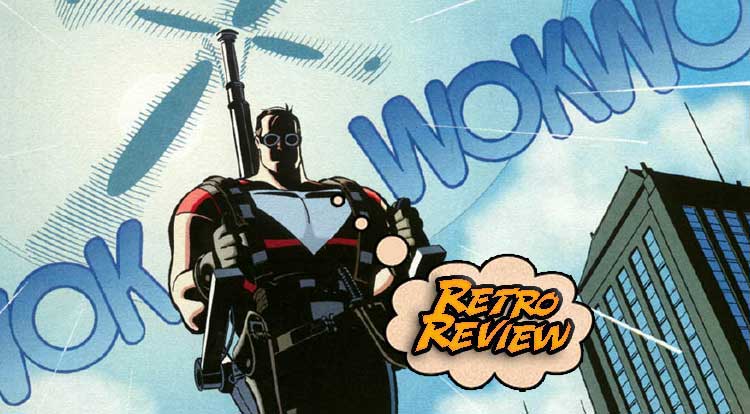 For a few brief years, the Wildstorm Comics imprint known as ‘America’s Best Comics’ actually lived up to the promise of its high-falutin’ name, providing the best comics on the stands.  At the center of that universe was the pulp-style superman known as Tom Strong… Your Major Spoilers (Retro) Review of Tom Strong #1 awaits!

Previously in Tom Strong: In the 1940s, the company known as Better Comics, Standard Comics and Nedor Comics at various times in its publishing history used ‘America’s Best Comics’, featuring anthology tales of their heroes, such as The Black Terror, The American Crusader and the Fighting Yank.  When Alan Moore chose to reuse the title, he created a number of unusual heroes, such as boy genius Jack B. Quick, and teenager Sophie Bangs, who became host to the sorcerous entity known as Promethea.  The first ABC hero, though, is the man known as Tom Strong, whose first issue is a bit unusual.  We open in Millennium City, at the home of school kid Timmy Turbo… Timmy is overjoyed to finally get his official ‘Strongmen Of America’ membership pack, reminiscent of the 1930s ‘Supermen Of America’ package offered by DC Comics.  In a stroke of meta-tastic storytelling (which we honestly should expect from the author of ‘Watchmen’), one of the things in said membership envelope is the very issue that we’re reading.  Timmy rushes off to meet the skycar to school, showing us the futuristic skyline of Millennium City, with its airships and skytrams, and begins reading about Tom Strong’s origin.  The story he reads begins in the year 1899, somewhere in the West Indies… Tom’s parents, Sinclair and Susan Strong, lose their captain (who is getting closer to his home, and no longer feelin’ mighty sick) as the ship runs aground on the lost, legendary island of Attabar Teru.  Though Tomas is dead, most of Sinclair’s scientific instruments have survived, leaving the Strongs to show Victorian resolve and stiff upper lips, using his equipment to survive…

As with most of his stories, this issue is littered with bits and pieces that will only become important (or even noteworthy) later, including Susan having an unusual attachment to Tomas, while Sinclair’s equipment foreshadows what would become Tom Strong’s scientific aesthetic.  Though I almost hate to call it steampunk, you can’t argue with a steam-powered robot whose memory is stored on wax cylinders like the musical recordings of the era…  Behold: Pneuman! With their automatic manservant up and running, the Strongs set about building a life for themselves, and Sinclair seems quite exhilarated by the idea of solitude and isolation.  They make camp in a dormant volcano (because there’s no way that could ever go badly) and even find the romantic island helps to rekindle their strained marriage… If you were to make a drinking game of this issue, you could start by taking a shot every time Sinclair Strong says something that is immediately proven wrong, as their tropical ardor leaves Susan pregnant (or, as I thinik they said in 1899 “softly swollen”) with a child who would become Tom Strong.  Sinclair, who I think of in my head as “Wrongway”, struggles to help his wife, and is overwhelmed by it all, panicking as their baby is born with the umbilical cord around his neck.  (As an aside, that happened to me, as well, and it is unfathomably terrifying.)  Thankfully, Sinclair’s predictions of isolation are wrong as well, as he (and we) meet the natives of Attabar Teru, the Ozu tribe… And lo, chapter one ends with the birth of our hero!  It’s a really effective chapter, thanks both to Moore’s complex writing and to the expressive artwork of Chris Sprouse.  Sprouse actually ends up pulling double-duty in the story though, as sharp-eyed Spoilerites will notice that the style of the Timmy Turbo segments is more cartoonish and child-like than the Tom Strong flashback parts of the story.  The two styles collide as Timmy’s skycar comes under fire by the villainous Blimp Bandits! The brigands are quickly intercepted by Tom Strong himself, making the scene on an amazingly cool-looking helicopter-backpack (which, by the way, I want for my birthday), but young Timmy misses the real-life appearance of his hero, being distracted by the retelling of his youthful adventures, where we discover that Sinclair has been raising his son in a perfectly isolated, heavy-gravity environment. The sterility of his upbringing is another bit of the origin that will be revisited in later Tom Strong stories, but this part ends with Sinclair condescendingly reminding his wife that the chamber is the safest place on Earth for their boy, and when Sinclair Strong says something, you know what that means? And thus, at tender age of eight years old, Tom became an orphan, in a heart-breaking turn of events, which once again distracts Timmy Turbo from the real deal, now battling pirates atop his skycar… We rejoin Tom Strong at the age of 21, having been raised by the Ozu, providing power and technology to their settlement.  Having reached the age of majority, Young Tom has decided to set sail for his parents’ homeland to make a name for himself. Awww…  What a big dummy.  Just like his father, Tom Strong has a lot to learn about the finer points of human interaction, but he makes his way to Millennium City and spends a few years fighting evil and making a name for himself as a science hero before realizing that he has unfinished business back home on Attabar Teru.

Aww…  That’s both touching and terrifying, in equal parts.  Jumping forward again, the story catches up to Tom and Dhalua in the year 1999 (both of them enjoying the extended lifespan that comes from a lifelong diet of Goloka root and perhaps a big of super-science), where we meet their “teenage” daughter Tesla Strong and King Solomon, the aforementioned brain-experimented gorilla, completing the circle of Tom Strong’s family… On panel (both our panels and Timmy’s, BTW), Tom and his family turn to break the fourth wall, welcoming the “newest member of the Strongmen Of America”, a moment that once again works on two levels, welcoming Timmy and the rest of us to Tom’s adventures.  It’s always hard to try to review Alan Moore’s work, for precisely this reason, as it’s a detail that really makes the issue memorable, and one that causes Timmy Turbo to once again completely miss his hero in action… The issue ends with Timmy suddenly realizing what just happened, just in time to miss Tom again, and endearing the book to me forever.  Interestingly, Timmy Turbo makes additional appearances in the book, including during the climactic finale of the book (and the entire ABC universe, literally and publishing-line wise), with additional Strongmen Of America putting in appearances as well.  As first salvos go, it’s one of the most successful in recent memory, kicking off not only Tom’s solo book, but the entire ABC line, and paving the way for ‘Promethea’, ‘Tomorrow Stories’, ‘Top 10’ and more excellent comic book stories.  Sadly, America’s Best Comics didn’t really survive the transition of mother company Wildstorm from Image Comics to DC Comics, thanks to Alan Moore’s antipathy for the company due to bad feelings about their treatment of the ‘Watchmen’ rights some years earlier.  (It’s actually a really complicated situation, but that’s sort of the 10,000 foot view.)  But, even knowing how it all would end, Tom Strong #1 makes a great first impression, with a century’s worth of world-building story and some great art, earning 4 out of 5 stars overall.

An unusual story, with a big spoonful of meta and some classic pulp story underpinnings, making for a killer origin and first appearance...