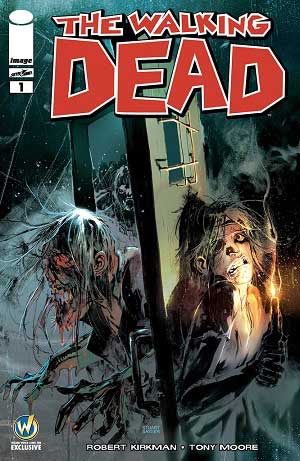 The exclusive The Walking Dead #1 edition will be produced in extremely limited quantities and is available at registration to fans at the Greater Columbus Convention Center only while supplies last. VIP attendees will receive an additional black & white sketch version of the comic.

Toy fans may remember Stuart’s work from a two-year run drawing the “Bionicle” comic book based on the popular Lego toy line of the same name. The series was translated to eight different languages and distributed internationally boasting the largest circulation of any comic book in the world.

The artists for future books will be announced as they are selected. A similar series in 2013 featuring exclusives of The Walking Dead #1 proved to be wildly popular with fans. The full schedule of 2015-16 Wizard World shows is available at http://www.wizardworld.com/wizcon.html .

About Robert Kirkman
Robert Kirkman is the creator of many popular comic books, including the Eisner Award-winning The Walking Dead , long-running Invincible, all-ages Super Dinosaur, and the new exorcism comic, Outcast which was released in June 2014 and recently received a pilot pickup for CINEMAX with Fox International.

Skybound Entertainment and Kirkman just wrapped production on their first feature film, Air, starring The Walking Dead ’s Norman Reedus and Academy Award-nominated actor Djimon Hounsou. The film is slated to be released in the spring of 2015.
Skybound released Kirkman’s new exorcism comic, Outcast , in June 2014 which recently got the green light for a television pilot with CINEMAX and Fox International. Kirkman will serve as creator and executive producer of the series.