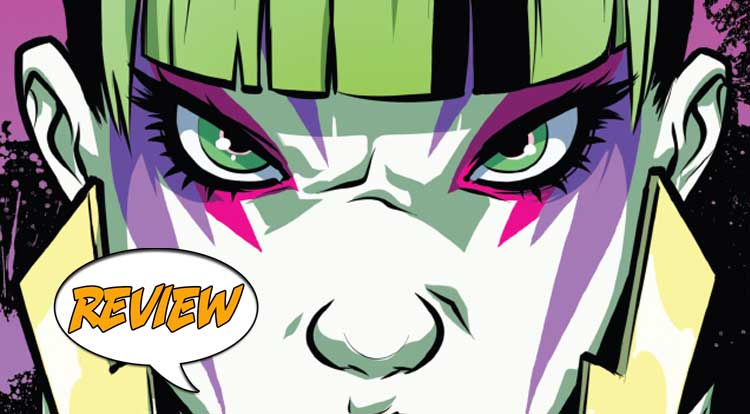 Jem And The Holograms #6 Review

Last time, things got ugly.  Are the Holograms out of the battle of the bands for good?  Your Major Spoilers review of Jem And The Holograms #6 awaits! Previously in Jem And The Holograms: The rivalry between Jerrica Benton’s band (led by her own holographic alter-ego, Jem) and the Misfits has gotten personal, to the point where a sabotaged stage left one of the Holograms hospitalized by an attempt to injure/kill Jem.  After a confrontation with the Misfits, Jerrica’s sister Kimber recognized the culprit behind the sabotage, and both bands took up arms in a giant…

…food-fight.  This has had some unintended consequences.

First and foremost, the sight of all nine band members lined up after their epic battle is just plain beautiful, and illustrates one of the most refreshing parts of this series: Different body-types, all drawn as equally adorable.  Things get ugly, story-wise, soon afterwards, as Jerrica and her band are informed that starting the fight violated their contract, meaning that they’re no longer part of the Battle Of The Bands.  It’s a huge moment for our rock star heroes and for the story, and it seems like the end of the world for everyone.  Even Misfits’ leader Pizzazz (whose band is immune from such pedestrian concerns, since her record label is bankrupting the whole shmageggi) protests, but the decision is final.  The pacing in this issue is perfect, giving us the Misfits’ disappointment, Stormer’s desperate attempts to make it up to her sort of girlfriend Kimber, Kimber’s heartbreak, and a sudden bolt from the blue as Jerrica comes up with a million-dollar idea.  The last third of the story does something that is VERY difficult to pull off, translating the auditory experiences of a rock concert (or, in this case, TWO rock concerts) into a purely visual medium, an achievement that is as impressive as it is effective.

Sophie Campbell is an excellent artist, you guys!  I love the fact that, after the food fight, when everyone is cleaned up and makeup-free, you can easily tell who is whom, even though it’s clear they’re not wearing any makeup.  With a large portion of the issue showing everyone out of “costume”, it could be confusing, but the Campbell makes it seem effortless (partly thanks to the distinctive facial shapes and body-types.)  The final page of the issue, featuring The Misfits coming to terms with The Holograms’ plan, shows masterful facial expressions from all four band members, leading to a clearly incensed Pizzazz declaring that, “This means war.”  The issue also features truly ingenious (and hysterical) guitar-shaped motorcycles in action, which is worth the price of admission.  With a focus on character development and romance, the plotting in this issue works perfectly, building the tension much more effectively than in the cartoon version (which sometimes played the Misfits as murderous psychos), and improving on the 80s original with more contemporary ideas and writing..

THE BOTTOM LINE: ANOTHER GRIPPING ISSUE

Look, whatever reservations you have about this book, I recommend dropping them and giving it a try.  It’s not what Stephen sometimes calls ‘the cape and tights’ stuff, but there’s a focus on action, effective characters (and character-driven conflict) and a really impressive translation between mediums.  In short, Jem And The Holograms #6 serves as the Jem revival we deserve, bringing her back into the Hasbro trinity alongside Optimus Prime and Snake-Eyes, and earning a 100% deserved 5 out of 5 stars.  It’s wonderful to find a writer/artist team so coordinated (and so talented) working so well on a property they clearly love…