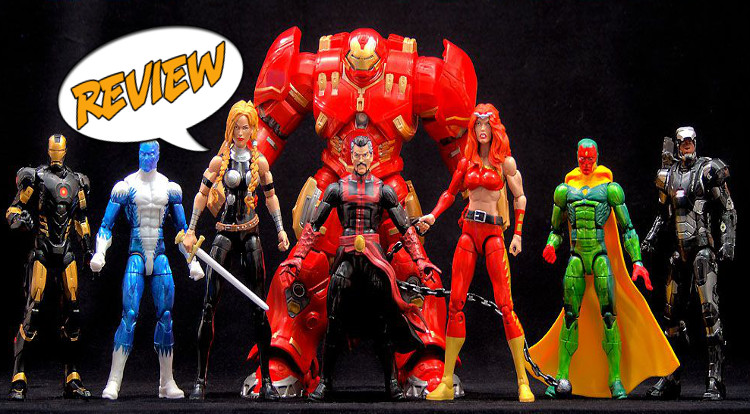 It’s part two of our look at the new Marvel Legends wave of Avengers toys.  Up next are Vision, Iron Man, War Machine and the big boy build-a-figure himself, Hulkbuster Iron Man!  Let’s get going and crack these guys open.

For each figure I’ll be reviewing quality, articulation, paint application, accessories and overall fun factor of the toy.  Granted, some will vary for each person’s individual toy but this should give you an all around idea of the line.  Lets get to it! VISION:  This one’s a bit of a mixed bag.  While I really like the toy, it does have it’s flaws even if they’re somewhat easy to ignore.  The articulation is great and his open hand helps get some really great hand to head “thinking” poses.  He comes with his cape which is a lot firmer of a plastic than what has come before, so it limits the ways he can stand some. As with a lot of the other figures in this line, the paint consists of about 3 main colors: green (2 shades), red and yellow.  While it’s well done and the lines on his legs are nice and straight, it lacks pop.  I can’t quite put my finger on it but it feels like a little more detail would make him great.  I really like Vision’s face and cape sculpt and he looks the best in flying poses.  Displaying this guy on a stand will make him look a lot cooler on your shelf. IRON MAN:  It’s about time we got an Iron Man Legends toy!  Sarcasm aside, this isn’t that bad of a figure.  The black armor looks really sleek and it’s one of my favorite designs.  All the articulation and molds have been seen before in numerous Iron Man toys yet it seems like the upper torso moves a bit more freely on this (I could and probably am totally wrong).  The shoulder pads on mine come off quite easily so those with small kids or those who like eating small pieces should be warned.  Everything on this Iron Man looks good and I like the toy a lot, I’m just tired of getting Iron Man and would love more characters along the lines of Valkyrie.  I can understand why they do it, I just don’t have to like it. WAR MACHINE:  Another character that there have been multiples of but out of the ones I’ve seen in person, this is my favorite.  I really like the paint scheme and it all is very sleek and gives him a nice shine.  He gets pretty much the same articulation as Iron Man figures with some limits because of his shoulder cannon.  War Machine comes with an alternate head, much like the Mark 43 Iron Man figure from the Thanos wave.  This one looks like Don Cheadle which is an interesting choice as I don’t think the armor resembles the movie version.  It’s not an alternative that I will use but it’s great to be given the option.  A cool figure, just one I’m not particularly interested in. BUILD-A-FIGURE – HULKBUSTER IRON MAN:  And now to the reason many will be buying all the figures in this wave…Hulkbuster!  Wow!  This guy is seriously impressive, at least scale wise.  He towers over the other figures and pretty much every 6 inch Legends figure, which is funny when you put him up against the recent Age of Ultron Hulk.  Articulation is great for a figure of this size: there is a 90 degree knee bend, the head moves very freely on a ball joint, ankle pivots and wrist swivel, plus swivels at the thighs, bicep and upper torso.  Lifting of the arms is limited by his massive shoulder pads.  A lot of dynamic pose options are available including the classic “on one knee, fist down” Iron Man look.  I would have liked at least a little finger articulation but that seems like asking a lot from “mainstream” toy manufacturers.  Unfortunately not everything is good.  The paint detail leaves a lot to be desired.  There are areas that could use more detailing, such as rivets or pieces of the armor that jut out that are just painted red/orange.  It’s all solid colors and no shading and my figure has a few splotches in areas.  While it’s disappointing, they toy is just so much fun to play with you’ll spend tons of time finding all the ways to display him in your collection.

While there are some negatives with this wave, most are easy enough to overlook for multiple reasons.  If you’re a fan of slightly obscure characters as well as female toys, this is a great wave to get in on.  Almost every toy is good enough to own and would look good in a collection, minus Blizzard.  It can be hard to justify spending $140 – $175 on toys, but I think the Hulkbuster is well worth it.  Series 3 of the Marvel Avengers Infinite Legends is a fun set and gets a solid 4 stars.