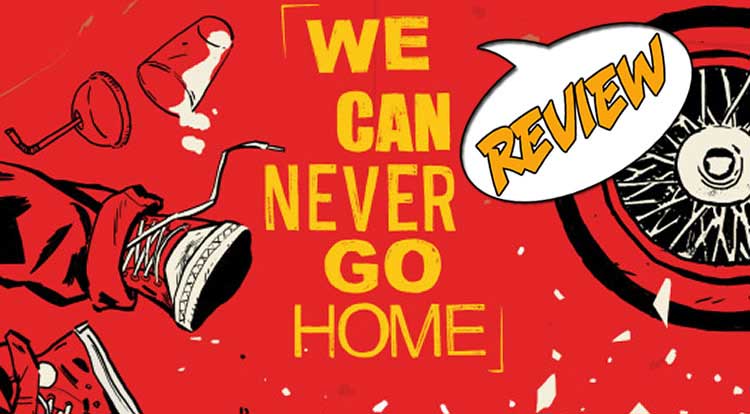 We Can Never Go Home #4 Review

I love that I keep discovering lesser-known comics companies who are turning out excellent books, such as Black Tiger #1 from Graphic India, which I reviewed recently.

This time I want to bring another terrific series to your attention, and that’s We Can Never Go Home from Black Mask Studios. I discovered the first three issues at Heroes Con in North Carolina a few months back, and had the chance to tell scripter Matthew Rosenberg how much I enjoyed the title to that point!

Now the fourth issue has now come out, and it continues this dynamic story run!

Previously in WE CAN NEVER GO HOME: “When you’re on the run, robbing and killing, sometimes $#!& goes really wrong.”

WHAT IS BLACK MASK STUDIOS?

Before I go any further with this review, we need to know more about the company that made We Can Never Go Home available. It’s called Black Mask Studios, and you can learn more about them at their website.

Here’s some information about them: “Black Mask Studios is a comics publisher and media production company that supports and advocates for subversive artists, building bridges and breaking down barriers so their work can reach new audiences.”

I don’t know if I buy the “subversive” part of that description, but I’m intrigued by the products they’re making available.

Their books include Ballistic, a madcap sci-fi buddy adventure about a wanna-be bank robber and his best friend; The Disciples, intrepid private eyes/bounty hunters who have been hired by a high ranking Senator to retrieve his teenage daughter who’s run off to join a mysterious religious cult; Godkiller: Walk Among Us, which is described as “Saga meets Johnny The Homicidal Maniac;” Space Riders, a ship crew who deals harsh justice to the scum of the galaxy while searching for forbidden truths; Transference, about an elite team of agents who use time travel technology that allows them to send their consciousnesses back in time; and Young Terrorists, described this way – “What if ‘the Smoking Man’ from X-Files was a real person, and his daughter found out what he did for a living?”

There continues to be a fascination about teenagers, particularly in comics. “Coming of age” stories will always grip us, I guess, and this book is one of the best!

The overall general description for this comic is: “Two teenagers on the run with a stolen car, a duffel bag full of cash, superpowers, and a .45. This isn’t the best time to find out they don’t really know each other.” The story takes place in 1989, and follows two teenagers—“cool girl” Madison and “weirdo creep” Duncan. As they get to know each other, run away from home, rob a local drug cartel, and accidentally commit the odd murder or two.

Like mutants, the teens in the book are beginning to discover the powers they have, and unlike the X-Men, they aren’t always the ones they’d like to have. In this issue, they encounter other teens like them, and it doesn’t always go well!

As Duncan and Madison begin to realize they have things in common, we see them try to work together. It has a very true vibe to it! What’s fun is that, as hard as they try to make things work out well, the situation they find themselves in just continues to spiral out of control.

What I love about this comic is that it feels “real” no matter how unusual the circumstances are. That has mostly to do with how powerfully the teens are written. They’re like kids I’ve known in my life, and the fact that they react to the weirdness they find they way they do only makes they breathe in my mind. Very well done!

Even when things are serious, there are sequences that are played for laughs … and even are comics in-jokes. One of this series’ most famous took place when Madison tries on various superhero outfits worn by women heroes. Funny!

The covers are particularly cool in that they usually have black and maybe one or two other colors, but that’s all! It gives them a very “artistic” feel, and I like the way that makes them stand out on comics stands besides the cool imagery.

I know people use this comparison too much these days, but the art does have a “Hawkeye” feel to it in that it’s simpler and more direct than a lot of other books. You won’t see a lot of bright colors in this comic, although it does happen occasionally, and that’s because it’s like real life.

I also enjoyed the color choices in this book, with lots of darker tones that make the lighter colors stand out. There’s one page where Duncan is trying to drive a car while talking with Madison, and the deep blues in the sky match with the darker red of the car well. Compare that to the street, which is a light purple, and you can’t take your eyes off the important parts of the page. Great!

THE BOTTOM LINE: A Series You Should Be Reading!

I was pulled into this title from the very first issue, and this fourth outing just keeps my interest growing more and more! It’s gripping storytelling that goes where no teen comic has gone before! They can be ordered through the Black Mask online store at this link.

I’m going to be checking out the other Black Mask offerings soon, so you might see me review them here at MajorSpoilers.com! Black Mask books are also now on ComiXology and the Amazon Kindle store, so you can access them online! Highly recommended!

This time I want to bring another terrific series to your attention, and that’s We Can Never Go Home from Black Mask Studios.