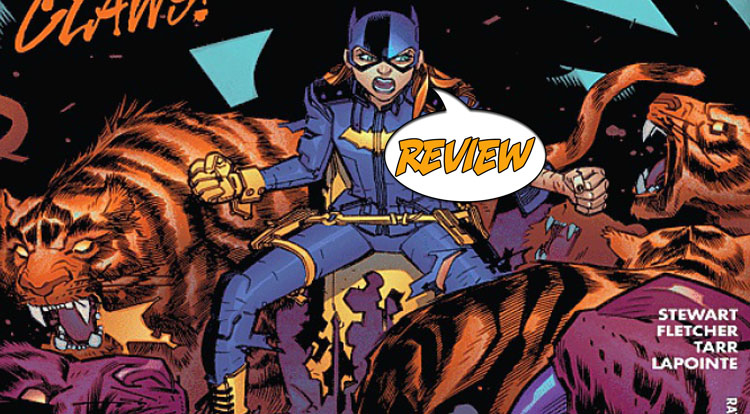 Batgirl #43 teases the introduction of a new villain for the titular heroine to take on and heightens the tension between Babs and Frankie. Batgirl #43 is very, very cute. This series under the pens of writers Brenden Fletcher and Cameron Stewart rejects all of the dark elements of the current Batman, Detective Comics and Batman and Robin series in the DCU. The villain of this issue is ostensibly, a misguided activist and some freed wild tigers by proxy. It’s a plot that sounds more like it came out of an episode of Scooby Doo than a mystery faced by a member of the Batfamily.

A lot of the drama in Batgirl #43 comes from the growing tension between Babs and Frankie. In an interesting movie Fletcher and Stewart have evolved Frankie into filling the same research and support role that Babs used to inhabit during her stint as Oracle. For her part, Frankie is more physically mobile than Babs was when she was restrained to a wheelchair and she wants to be a part of the vigilante action, this being the point where she runs into resistance. Toward the end of Batgirl #43 Frankie takes Babs’ cowl and presents herself to Qadir (who has some troubles of his own in this issue), as an associate of Batgirl’s.

Let’s stop and talk about this for a moment. Stewart and Fletcher are teasing readers with a lot of compelling possibilities in Batgirl #43 – will there be a Batgirl-centric team? Are they rebuilding Birds of Prey? Is Frankie going to step into a role traditionally played by Helena Bertinelli or Stephanie Brown as auxiliary-female-Batfamily-member-but-not-Batgirl? Are we going to get another new Batfamily member of colour joining Duke Thomas that Batman series readers know is destined to become a Robin?

Frankie has proven herself capable in the Barbara Gordon school of superhero-ing with much of her work beginning squarely in the field of research followed up by a compulsion to be part of the game and not letting herself be held back by anyone else who may be trying to protect her and in Batgirl #43 she proves that she is stealthy when she corner Qadir, she can hold status and makes intelligent decisions in which civilians she is willing to work with.

It is my adamant hope that after the blow out fight that seems inevitable between Babs and Frankie the way Fletcher and Stewart have shaped their overarching narrative that we’ll be able to see this pair team up (and bring in Dinah as well since Brenden Fletcher is also penning the Black Canary title for DC), in coming stories.

Batgirl #43 excels in the difficult question of who is in the wrong? With Barbara herself acting something of a fool she is set up by Fletcher and Stewart as a nice literary foil for Jo who is partially responsible for why tigers are ranging around the Burnside neighbourhood of Gotham mangling hip young tech folk. The line of morality is blurred to an interesting shade of grey until the actual big bad is revealed in the final splash page all ready for a big showdown next month.

Aside from the Endgame crossover, Batgirl #43 is the best issue of the series to date. It strikes a great balance between interpersonal drama and superhero action.

The colour is on point in Batgirl #43 and the absolute star of the artwork.

Babs Tarr continues to improve issue after issue as she pencils the series and she does solid work in this issue. There are a lot more men in Batgirl #43 and her work on them is great. One of the issue I have with her work in general is that all of her female character have the same face and the same expression and she really falls heavily into that in Batgirl #43. Character all have different hair, makeup and skin tones, but the eyes, nose, face shape and expressions remain identical. Everyone on panel from Babs to Frankie to a character named Valerie (who only appears in this issue), and this trait is particularly obvious when Frankie takes the mantle of Batgirl for herself.

That criticism aside, Tarr chooses a lot of interesting angles to tell the story from and that definitely makes Batgirl #43 a fun, fun issue to look at.

As mentioned above, Serge Lapointe is the man who makes Batgirl #43 a truly beautiful work of art. He contrasts warm highlights with dark lowlights that are not only appropriate for the time of day where the individual plotline are taking place, but subtly hint at the states of being that the point of view character is living in … or are about to be.

This can sometimes feel like the audience is being manipulated by the creative team, but in the case of Batgirl #43 it is so well done that it’s just lovely to behold.

Batgirl #43 delivers on the series promise. This issue is totally fun, dynamic, action packed, filled with cool ladies and you’ll love reading it. Pick this up or give it to anyone you know!

Batgirl #43 highlights interesting aspects of both the characters personalities and the artistic team.