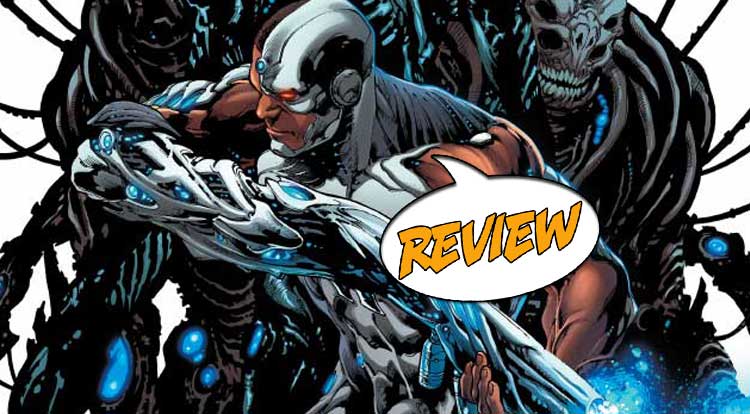 Victor Stone has a whole new attitude and a new armored interface, and is rebuilding his life separate of the JLA.

Too bad about the cybernetic aliens headed straight for him…  Your Major Spoilers review of Cyborg #2 awaits!

Previously in Cyborg: “The most advanced tech known to humans has been used to turn Vic Stone in to Cyborg, making him one of the most powerful beings on the planet.  Now he’s been targeted by alien invaders that want his technology-even if they have to kill Cyborg and everyone he knows to get it!”

THE DREAMS OF VICTOR STONE

Having finally extricated himself from the ever-escalating crises of the Justice League, Vic Stone has finally made his way home.  Of course, before that happened, he received a big-time upgrade, streamlining his cybernetic systems into a less-chunky armor, and giving him new and different abilities to deal with.  This issue begins with a fascinating monologue, as Vic ruminates on the questions people ask him about being a cyborg: Does he eat?  Does he use the bathroom?  What about sex?  Walker’s script allows us to get inside Vic’s head in ways we never have since the Flashpoint retcon, giving him a smart, wry voice and a believable attitude for a man who is now more than half machine.  It turns out that he does sleep, and also dreams, which leads us into the meat of this issue’s storyline.  At the same time, the subplots from the previous issue start to gel, as we meet a young man named Bobby who receives cybernetic upgrades to his injured arm and eye from one of the quasi-legal ‘Body Shops’ that are popping up around the country.  There’s also a clearer understanding of the mysterious alien Technosapiens and…

I really enjoy getting inside Vic’s head, and this issue shows off a lot of sides of our hero, including his adversarial relationship with his father, his uncertainty and just a tiny bit of cockiness that reminds me positively of the ‘Teen Titans’ cartoon take on the character.  (Readers of the 8-page preview that led into last issue might remember that there was even a “Booyah!” in those pages, a development I’m perfectly happy with.)  Vic’s new systems give him strange new capabilities, which Ivan Reis takes great delight in drawing. The whole issue looks wonderful, whether it’s Bobby’s surgery in the skeevy underground Body Shop or Vic taking on a cadre of STAR Labs androids to test his capabilities.  Heck, even Cyborg having a quiet discussion with his (rather confused) cat, Smokey, looks amazing, and Cyborg’s armored form looks as good as it ever has post-New 52.  (I have to admit, the super-blocky Jim Lee design never felt appropriate for this character, to me.)  As the issue ends, we’re left with a terrible cliffhanger that should finally force Victor to face the aliens that have been skulking in the shadows for the last two issues, which I hope will make for some big action to wrap up this first arc.

THE BOTTOM LINE: A VERY HUMAN TAKE ON CYBORG

In short, this updated Cyborg is working for me both as a character and as a hero, and the steady build to the conflict with the aliens is successfully ratcheting up the tension for what is to come.  Cyborg #2 has excellent pacing and a well-defined main character, as well as lovely art, earning a well-deserved 3.5 out of 5 stars overall.  I’m really hoping that fans of the character who dropped out when he was reconfigured for the Justice League post-Flashpoint give this one a look, as it is a solid series for our cybernetic hero…

The human side that Cyborg has been missing lately, with lovely art and a looming techno-apocalypse...