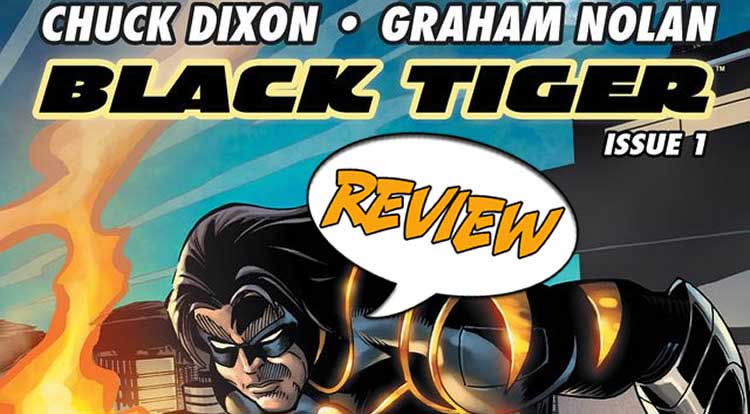 There are certain comics creators I’ve followed for years, and with good reason – they always make excellent stories!

One such person is Chuck Dixon, who writes heroic fiction like few others! Whether it’s novels or comics, you can always count on Mr. Dixon to tell engrossing tales that will be well worth the money!

His latest project is another great example of how he can weave a powerful story in a comic!

Previously in BLACK TIGER: “From the legendary team of Chuck Dixon and Graham Nolan comes their newest superhero creation — Black Tiger! As a kid, Rajan Shah lost his parents to a hit-and-run driver. Resigned to a life of poverty, Rajan is stunned when a mysterious benefactor pays for his education. Determined to make the most of his good fortune, Rajan becomes a lawyer to fight for justice. But as an adult, Rajan discovers that some forms of justice must take place outside the law!”

WHO IS GRAPHIC INDIA?

First things first – who’s this company that made Black Tiger available? It’s called Graphic India, and you can find out more about them at their website.

Here is some info about them from that very site: “Graphic India is a character entertainment company focused on creating leading characters, comics and stories through mobile and digital platforms. Founded by media entrepreneurs Sharad Devarajan, Gotham Chopra and Suresh Seetharaman, Graphic India is owned by the U.S. comic book company Liquid Comics and CA Media LP, the Asian investment arm of The Chernin Group, LLC (TCG). The company’s partners and investors bring together decades of experience in building businesses in character entertainment, media and India.

“Graphic believes that India is home to some of the most creative talent in the world, with more than 500 million people under the age of 25 and more than 850 million mobile phone users in the country. The company’s mission is to create enduring stories and heroes that foster the imaginations and fuel the inspirations of a new globalized generation of youth in both India and around the world.”

As someone who truly believes in diversity, I’m always searching for new organizations with people who’re trying to add more creativity to the comics industry.

Graphic India is likely best known right now for publishing 18 Days from Grant Morrison. I’m enjoying that series as well. Other projects in the works include Ramayan 3392A.D., The Leaves and The Sadhu, in development as a Hollywood film;  Devi, a female superhero from acclaimed filmmaker Shekhar Kapur; and Chakra The Invincible, the first superhero for India from legendary creator Stan Lee.

Add to that Black Tiger, which features the team that developed Bane, a well-known Batman foe. One note, though: According to the comic, the aforementioned Mr. Devarajan created the character, with Dixon and Nolan providing the script and art for the comic.

It’s not clear which aspects of this debut issue are from Dixon and what comes from Devarajan, but I liked how things moved quickly, with a lot of surprises along the way.

I also felt a lot of sympathy for the title character, Rajan, who has to endure quite a lot of hardship in his life before he takes on the role of a hero. Even after he’s donned his costume, he still encounters enemies who know more about his powers than he does, which at one point knocks him for a loop! It’s great that we’re learning about this new hero as well as his situation at the same time Rajan is!

Thankfully, he’s got a strong supporting cast who are there when he needs them. He’s going to need them as he finds out more about The Twelve and their abilities!

NOLAN’S ART IS DYNAMIC AND CLEAR

First off, I loved the dark blue and gold costume that Rajan wears when he’s the Black Tiger. Very appropriate! It appears to be armor-like instead of spandex, which I think makes sense these days.

Nolan’s artwork is easy to understand, and he always does a great job with drama as well as action.

I also enjoyed the color choices in this book, which helped Nolan’s art pop off the pages. The darker aspects of the story get a darker treatment while the battle sequences have bright yellows that make the powers of both good guy and villain sparkle.

THE BOTTOM LINE: A Great Debut

I didn’t see this title at my local comics shop. I imagine it may take some time before a lot of Graphic India’s books filter into the neighborhood stores. I have bought 18 Days locally, though, so I’m hoping books like Black Tiger will follow it soon. Otherwise, that’s what comixology.com is for, I guess!

As a heroic comic, though, it hits all the high notes that I love in superheroes – from characters I sympathize with to action sequences I like to look at! Great story, believable characters, stunning art – It’s a terrific start! Highly recommended!

A great start to a new title from Graphic India!