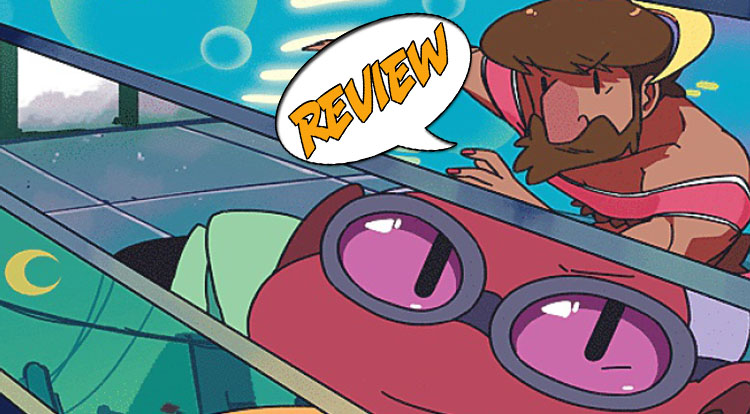 Power Up #2 get the entire team together allowing the audience to discover Amie, Sandy, Kevin and Silas’ powers along with them in a very fun issue. Previously in Power Up #1: Amie, Sandy, Kevin and Silas all get hit by alien magic!

Writer Kate Leth has packed an awful lot of action into the twenty-two pages of Power Up #2. The issue begins with a peek at Amie’s life that may lead readers to believe that is rather something of an introvert in contrast to her charmingly loud personality displayed in the previous issue. This device not only serves to intimate that some time has passed since the incident with the alien magic and thereby justify Kevin and Sandy’s familiarity with their respective power sets.

Whereas in Power Up #1 readers were treated to the barest of introductions to Sandy and Kevin in Power Up #2 Leth lets us have a little more. For his part, Kevin is absolutely spectacular – the most wonderful character inside this wonderful world. Kevin wields a magic crystal-tipped spear and is garbed in protective armour that is highly reminiscent of every Sailor Scout uniform Pretty Guardian Sailor Moon ever had and he’s just fine with that. He very sweet, very strong and apart from the visual humour behind his character design, seems like a really nice guy who will likely fill the role of team leader until Amie (Power Up #2’s point-of-view character), is really ready to step into her own.

Sandy is also very comfortable with her super strength in Power Up #2 and completely ready to use the assets that she possesses as middle-aged-mother-of-two (most notably the “Sandymobile”, which is, in fact, a soccer mom van), in contrast to Amie who isn’t too sure how to conjure or wield the electrical sparks readers saw her with in the previous issue.

Leth has set up all essential aspects for Amie’s hero’s journey in the pages of Power Up #2 touching on all the major themes to be paid off in the coming four issues of this miniseries. On top of meeting all the expectations seasoned comics readers will have of an origin series she – to her great credit – has built a charming cast of characters that are diverse ethnically, anatomically and in their points of view. Sandy is caring, Kevin is compassionate, Amie is spirited and Silas is a tiny laser whale. Power Up #2’s accidental team all have personality traits that complement each other, making them as a unit the equivalent of a fully functional human.

Power Up #2 nails the silly-yet-serious tone that is so important in all-ages comics and allows the story to be accessible to a wide variety of readers. It treats some subjects with irreverence in a way that is sure to appeal to the younger readers, but lands all the serious emotional and character beats that keep older readers returning to all-ages comics. This second issue improves on the ideas set up in the first issue, it’s chalked full of action beats, the cast is instantly likable and it is poised to pay off themes in the rest of the series.

Have I mentioned enough yet that Power Up #2 is cute? It is. It’s so cute! Matt Cummings celebrates the most fun elements of Leth’s story by leaving visual highlights for readers to follow. Amie’s pet hedgehog wears sunglasses – letting readers know that not only is Amie compassionate and caring, but her pet is the coolest pet in town.

Cummings also presents the heroes of Power Up #2 in interesting ways. For example, Kevin is a former athete-turned-construction-worker and Cummings draws him sufficiently large and masculine – even inside the Sailor Scout protective armour – yet he wields a spear. A spear is a long range precision instrument which speaks to the fact that Kevin is a thoughtful strategist.

The subtle aspects that Cummings adds to Power Up #2 are the icing on the kinetic cake. In this issue in particular the action clips along at a breakneck pace, making the issue a rather quick read as a side effect. Panels are laden with action and movement that not only speaks to Cummings’ dynamic visual style, but definitely leaves a suggestion to the reader that Power Up would be a really cool cartoon.

For an adorable, compelling style that teaches readers more than they anticipated when picking up Power Up #2 the one man art team deserves a ton of credit and respect.

BOTTOM LINE: POWER UP IS SUPER

Power Up #2 is so much fun. Plus, it’s really different. Plus, it’s surprisingly thoughtful and careful in its delivery. Plus, FIGHTY ACTION FIGHT!

Power Up #2 is bright, beautiful and does a great job highlighting what is most compelling about each of the characters in this issue.