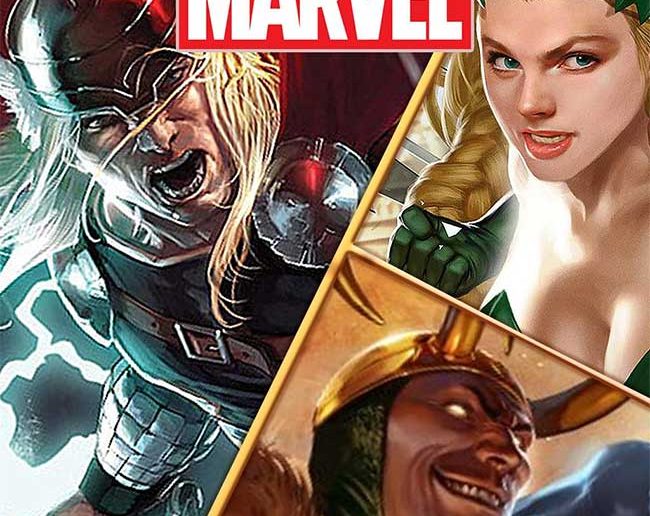 Seems like everyone is getting in on the card battle game action, and Marvel just upped the game with a brand new update to its Marvel: War of Heroes mobile game.

The update introduces the Nexus, a brand new game mode that includes all-new gameplay mechanics, a revamped user interface, and a dynamic card evolution system for a brand new set of Nexus cards. The initial release of Nexus will feature the world of Asgard – a realm based off Norse mythology. Experience the “Might of Asgard” by assisting Thor in his quest to prove his worth to Odin, as he challenges fellow Asgardians such as Heimdall and Sif. Collect the Nexus cards of the Asgardian by defeating them in battle and earning the right to use their unique abilities.

So what is this game all about? Here’s how it is described in the press release:

In Marvel: War of Heroes, players will travel through the Nexus portal to explore various iconic locales in the Marvel Universe, embarking on missions and pitting themselves against enemies in a brand new Revolution Battle system. Powerful cards, strategic card placement, and skillful deck maneuvering are all necessary to obliterate enemies and amass valuable rewards. Players can collect all-new Nexus cards by completing missions in the Nexus, then gathering and crafting over 60 new Materials and Gear that can be equipped onto Nexus cards to arm them for battle. Use these powerful Nexus cards in the game’s events to battle other Agents and bosses for even more rewards.

So, are you on board to check this game out? I’m on the fence at the moment. On the one hand, these battle card games like Hearthstone are incredibly fun and popular. On the other hand, I’m so busy working on Major Spoilers stuff that my free time is now split between dealing with growing children who like to fight non-stop, to cooking food for the family, and the few hours of sleep I get. Do I have room for one more thing? You tell me.