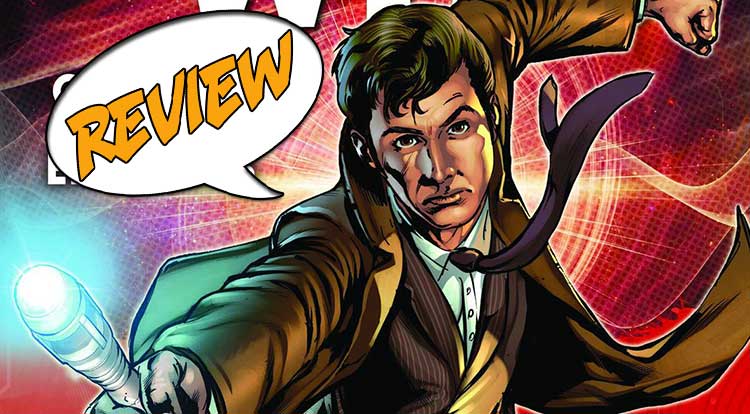 Having run into himself, The Doctor must figure out what error they must correct before the Reapers take them all down. Is it just another ordinary day? Major Spoilers reviews Doctor Who: Four Doctors #2, and breaks it down for you. Previously in Doctor Who: Four Doctors: Clara Oswald discovered a picture of three Doctors having a discussion, with a warning that if these events came to pass, it would lead to the end of the universe… or something like that. Of course Clara did everything in her power to keep that from happening, which means, it absolutely did happen. In Paris. In 1923. And then the Reapers showed up.

HE’S THE CLOWN ONE

The bulk of this issue focuses on the Doctor(s) and his companions trying to get the Reapers off their backs. In the process, Eleven becomes a comical clown in my eyes. It’s not like we haven’t seen Eleven being portrayed as comical and lighter, but as we are only given a set number of pages in this issue, and only so many panels to feature the antics of each of the Doctor’s incarnations, Eleven’s hijinks seem a bit too over the top for my liking.

Then there is the resolution with the Reapers that has to do with three versions of the Tardis docked within each other, lots of running through various aspects of the ship, until the Tardises are able to dematerialize from one another resulting in a flight or die response from the Reapers. For this reviewer, it really seemed a bit much, and a bit hard to follow at times with all of the Doctors yelling at each other, stepping on each other’s lines, and the general mayhem of the situation.

In the end, The Doctors agree to investigate why only their incarnations have been drawn together, which sends them on a quest to find the War Doctor, which leads to the heal turn reveal of the Voord.

Paul Cornell does a fine job of keeping the story moving, but at times there is so much going on, and so much that readers need to know that there are portions of this issue that seem really jumbled and awkward. I believe a lot of this has to do with three doctors appearing on the page at the same time, and grammatically flipping the tense around as each refers to the other as “me”, and also “them” in their discussions with one another. Even with the muddy bits, I did like the story aspects of this issue as we moved to the final page reveal.

LOTS OF THINGS TO SEE HERE

One of the benefits of having the Doctors running through the streets of Paris, and through multiple versions of the Tardis is readers gets to see a scene change in almost every panel of the issue. Neil Edwards does a masterful job of keeping everything together, and serving up super detailed panels. By my count there were only ten panels in this issue that relied on a blank background with a gradient color to convey a sense of space. I really appreciate it when an artist goes the extra mile to fill the panel to make the comic world feel more realistic and solid rather than conversations in a vacuum.

Overall, I did enjoy Doctor Who: Four Doctors #2, as it did set up the big quest for the rest of the series. The characters remained on point, even when there are six of them on page at the same time, arguing with one another. The constant bickering was a bit off putting, and seemed to muddy the narrative, but it was still enjoyable. I hope the madcap arguing gets toned down a bit as it will improve the flow of the book going forward.

Overall, I did enjoy Doctor Who: Four Doctors #2, as it did set up the big quest for the rest of the series.