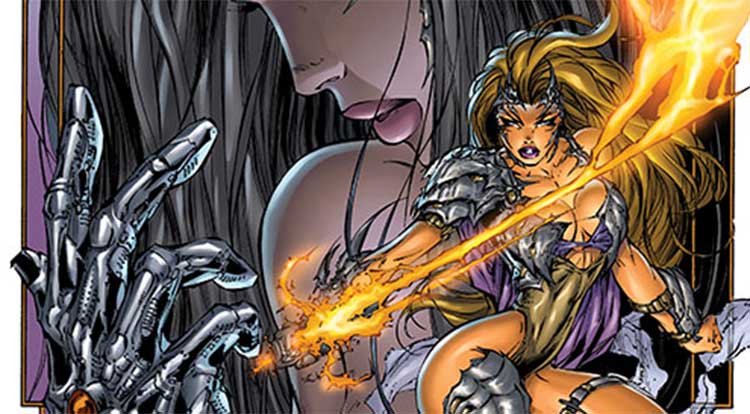 Top Cow’s long-running WITCHBLADE series, first launched in 1995 and created by Marc Silvestri, David Wohl, Brian Haberlin, and Michael Turner, will celebrate its 20th Anniversary with a deluxe WITCHBLADE 20TH ANNIVERSARY “ART OF” hardcover, a Commemorative Lithograph, and will come to a jaw-dropping conclusion with WITCHBLADE #185—the final issue.

In WITCHBLADE #185, an era comes to a close with a double-size final issue of Sara Pezzini’s twenty-year run. Several previous WITCHBLADE artists return to the title to send her off in style. The story resolves Sara’s return to New York, her relationship with Gleason, and her attempt to find a suitable bearer to give the Artifact to. Cover A by Michael Turner can be pre-ordered using Diamond Code AUG150499. Cover B by Keu Cha can be pre-ordered with Diamond Code AUG150500. Both will be available on October 14th.

Image/Top Cow is also pleased to release a deluxe WITCHBLADE 20TH ANNIVERSARY “ART OF” hardcover. This special, over-sized WITCHBLADE hardcover will be a veritable who’s-who of comic artists with original content not previously seen in THE ART OF WITCHBLADE. It can be pre-ordered using Diamond Code AUG150570, will hit shelves on October 28th, will be limited to 1,000 copies, and will never be reprinted. There will also be a limited number of 11” x 17”, full-color WITCHBLADE 20TH ANNIVERSARY COMMEMORATIVE LITHOGRAPHs featuring art by Michael Turner available on October 28th that can be pre-ordered using Diamond Code AUG150504.